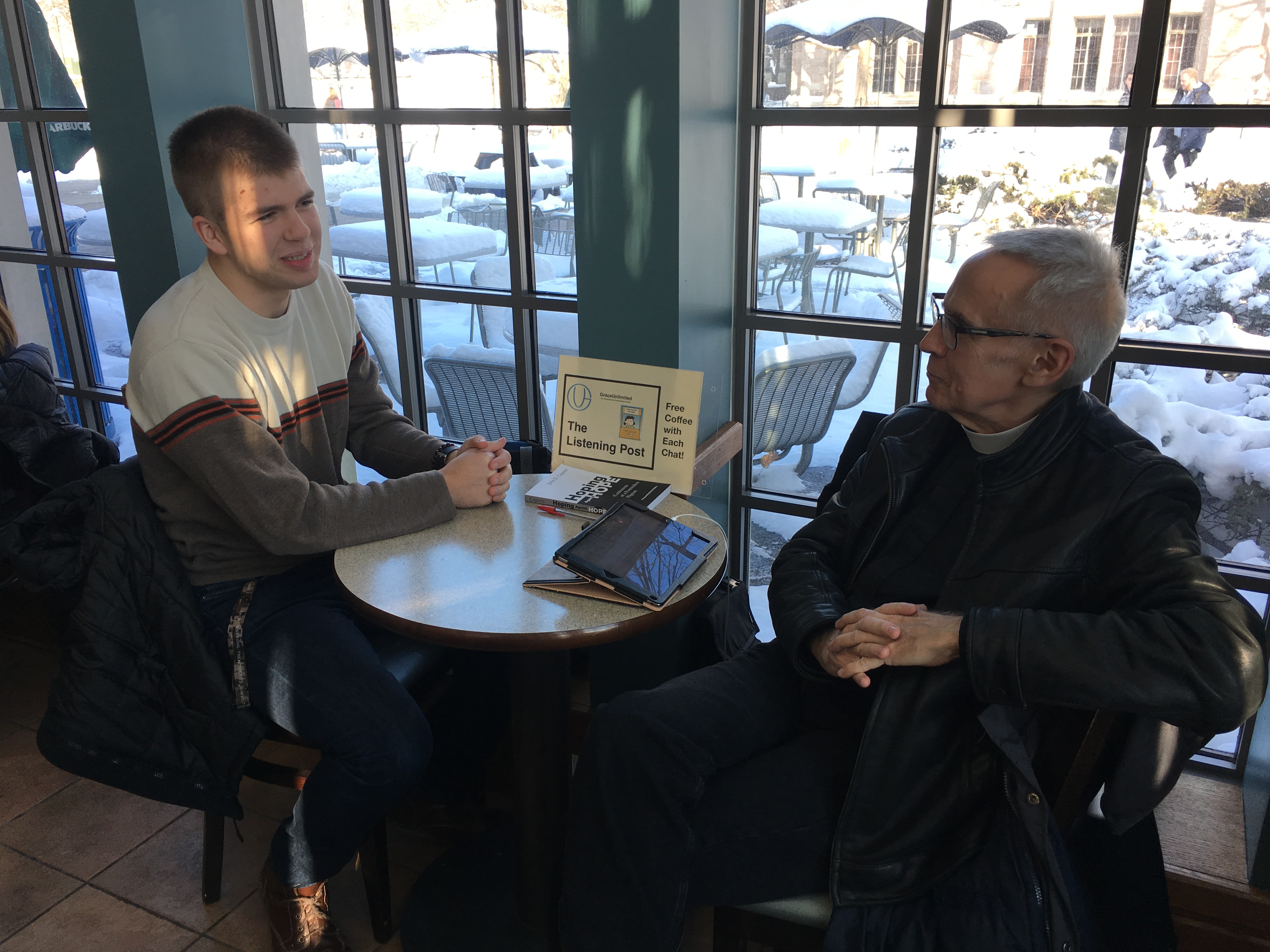 Charles Allen speaks with a student at the Listening Post. Photo provided by Charles Allen.

The sign rests next to a stack of books on a Starbucks table. “Listening Post. Free coffee with each chat.” The owner of the sign, Charles Allen, can be found sitting in the campus Starbucks study area throughout the week.

The Listening Post is sponsored through GraceUnlimited, a campus ministry on Butler University’s campus. Allen is an Episcopal priest and a chaplain for the organization.

“What I wish people would take me up on more is to have free coffee with me,” Allen said.

His goal, Allen said, is to engage people in conversation. He has a doctorate in theology and taught at the Christian Theological Seminary, but did not like the grading aspect because it felt like he was rating students. With a conversation, though, he can just watch them unfold without having to rate someone as it happens.

Allen said he tries not to have expectations for what students can take away from Listening Post conversations. His goal is not to convert students nor to have them think the way he does. He welcomes those with views different than his if they have questions or need help and has even accompanied students to the HRC for more consultation.

“It does not have to be a question they have about faith,” Allen said. “If they want to come and throw all their opinions at me, that’s fine.”

About a year ago, Jake Small, a junior anthropology major, did just that.

“I’m pretty sure I sat down one day and was like, ‘I don’t know about this whole whatever — I don’t think you’re right about anything and this is why,’” Small said, recalling a conversation with Allen.

Small’s first conversation with Allen was during a time of change in his life. He decided to “go up to this dude that sits here, talk to him and see what happens.”

He clearly wasn’t intimidated, and Small said it doesn’t appear that most students are.

Rachel Harrod, a senior religion and political science major is president of GraceUnlimited. She has also seen the effects of a Listening Post conversation first-hand. Harrod admitted that the first time she attended GraceUnlimited, she felt it was “wishy-washy” and thought Allen was very informal.

Since then, her conversations with Allen have helped her find her way. When she came to college, she was trying to find herself religiously. Over the last three years, she has gotten married, a ceremony which Allen officiated, and has become a member of the Episcopal Church.

“My relationship with Father Charles [Allen] has been one where he has allowed me to step out of my comfort zone with religion,” she said. “He’s always one of those people that’s there and wants to talk.”

Harrod said she has known people to stereotype those like Allen when they see the white collar or someone who appears to be a priest. Harrod said they think they will have their beliefs pushed on them, but that’s not what Allen is about.

“Don’t be fooled by the fact that he looks like a 65-year-old man,” Harrod said. “Father Charles [Allen] is probably one of the least judgemental people that I’ve ever met. He makes a point to say that anybody can come talk to him and have a conversation at Starbucks.”

People that interact with Allen, whether it’s at the Listening Post, GraceUnlimited or those that partake in the Butler Chorale with him, know that Allen has a larger than life sense of humor. Harrod also noted that he has bad road rage.

Despite his age, Allen is able to relate with college students and create relationships, such as the one he has with Harrod. As she puts it, he is with the times. And being with the times has allowed him to help people open up.

His relatability come from his experienced background. Allen grew up in a liberal southern Baptist family.

“There are such things,” Allen joked.

In high school, his views grew to be more conservative. He said he was horrified when his friend became an Episcopalian — a branch of Christianity that takes on a more liberal stance, such as ordaining women and open members of the LGBTQ+ community.

He soon found that he could not biblically support his arguments. Over the years, he grew to appreciate the Episcopalian denomination and “fell in love” with it, even though he did not become an Episcopalian until he was in his 40s.

“Episcopalians love to say this: ‘You don’t have to check your brains at the door when you enter a church,’” Allen said.

He is able to promote this type of faith by being a chaplain for GraceUnlimited, which accepts students in all walks of faith, including atheism and agnosticism. The campus ministry is sponsored by the Episcopal Church and the Evangelical Lutheran Church in America.

Junior student Small, who is also an officer for GraceUnlimited, said he joined the ministry for the great conversations — and for the free food. On Wednesday nights, the ministry serves Insomnia Cookies along with discussion. On Sunday nights, Allen provides pizza and a sermon.

“It’s a place where people can come and just unapologetically be themselves,” Small said. “We all recognize that in each other and there’s something really special in that, regardless of the faith-aspect of it.”

GraceUnlimited’s values include justice-seeking, contemplative, biblical, inclusive, traditional and progressive, according to their website.

Allen said he doesn’t like the term progressive because it sounds like they are patting themselves on the back. A lot of people think you cannot be all of those values, but Allen said GraceUnlimited’s progressive, inclusive and justice-oriented values flow out of their “high regard for scripture and tradition and contemplation.”

“He says whoever loves another has fulfilled the law,” Allen said. “Well, it seems like that’s what people are trying to do with same-sex marriage, so we do them.”

“He models, for many students, a different kind of Christianity,” Hege said. “It’s really wonderful to have someone here who understands the discipline that I teach and study. He’s the only one on campus.”