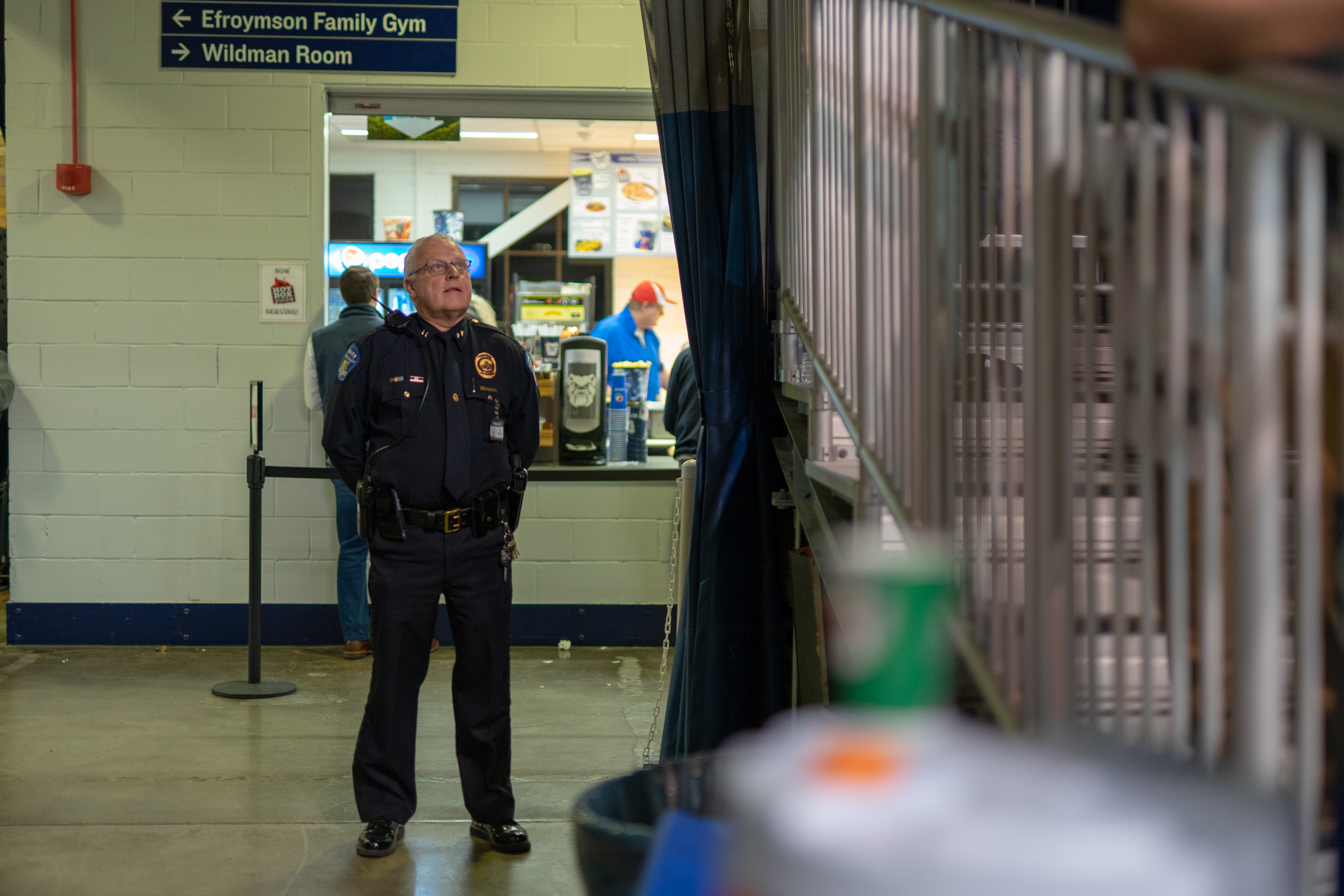 BUPD Chief John Conley at a Butler basketball game in Hinkle Fieldhouse. He has been at Butler since 2015. Photo by Adam Cvik.

Family first. That is the motto John Conley, chief of the Butler University Police Department, leads his department with every day.

It is this dedication which brought Conley to campus at 3 a.m. on a cold weekday night this past year. After receiving a call from a female student whom he did not know personally, Conley drove to campus to meet with her. The startled student had been robbed nearby her senior house.

She wanted to pray, so they prayed together, sitting in her living room. Conley reassured her an officer would be stationed outside her house the rest of the evening.

“He always makes sure everyone is OK,” assistant chief Tony Rivera said.

Rivera sat back in his chair. From his spot in the office he could see Conley’s door propped open, the way it always is. Rivera worked for Gary Police Department before coming to Butler. None of his previous chiefs had an open door policy. The same goes for Roy Betz, a Capitol police officer turned lead emergency preparedness and training officer for Butler.

Conley’s door is always open — no matter the issue.

“I wish people knew how approachable he is, and fair,” Rivera said. “If one of our officers is doing something wrong, he’ll do something about it. He will do whatever he can to bring a student a resolution.”

As chief of police, Conley said his main goal is simple: “To get these students through and out of here safe and sound, with nothing in their background that’s going to cause them embarrassment. I want everybody safe and to be successful.”

As a high schooler, Conley idolized his older brother, who began his career as a police cadet while in college. But by the time Conley was eligible, the position had been eliminated. After reaching out to the Indianapolis Metropolitan Police Department, Conley was offered a civilian position in their property room logging evidence into their system.

“I worked until my 21st birthday, and on that day, I walked into work and there was an application rolled up in a bow sitting on top of my cake,” Conley recalled. The application was already filled out and signed by his superiors. He began at the academy just a few weeks later.

After over two decades of patrol, Conley was promoted to lieutenant where he served as a human resource officer in addition to a sexual harassment investigator. He went on to serve as the deputy chief of operations, and even led the Department of Homeland Security process for Super Bowl XLVI when the championship was held in Indiana for the first time in history.

After devoting 40 years to IMPD, Conley retired on a Friday, and that’s where Butler came in.

Conley’s daughter had been accepted into Butler’s College of Education to become an elementary school teacher when he received a call in the spring of 2015 from Ben Hunter, the Butler police chief at the time. Hunter asked Conley to start Monday morning. He completed his first shift at Butler on March 3, 2015.

It was as most people would say, a sign. For Conley, “It was a God thing.”

Conley said he believes his profession is more than work, it is his mission field. As a man of faith and devotion to God, he has volunteered within the Indy area and traveled to Mexico for numerous mission trips. For the father of three, it became evident that his mission at Butler was to ensure the safety of students.

“What a better mission field than to be a police man and help others with trials and diversities in a way that you can really help,” Conley said.

Sergeant Roy Betz, a former field training officer for Conley, said he was heavily impacted by Conley’s leadership and advice just a few months ago.

“It was good advice. We all have daughters and sons,” Betz said, who is also a parent. “It’s a different type of policing. A lot of the decisions are from the heart here.” Betz switched his gaze down to his hands. “A lot of students don’t realize that.”

Separate from his philosophical contributions, Conley has made numerous policy changes during his time as chief. Betz, the lead training director, noted how Conley has tripled the department’s training hours. Not only has he implemented new training, vehicles, four additional officers and protective equipment, he has also provided officers personal support that shapes their work experience.

“He always tells me family comes first,” Betz said. “He realizes that you need to allow officers to have a separation of work and home. It keeps officers happy.”

Conley’s eyes light up and his smile widens when he speaks about the two most important aspects of his life: family and faith.

“I think sometimes people are worried to express their religion, but I think it’s more so of an opportunity,” he said.

On a dark and cold December morning, Conley walked up to the gazebo near the campus Starbucks, a big white plastic bag containing two dozen donuts in hand. It is his weekly ritual. His way of bringing the community together — administrators and students.

The group, which includes students who’ve attended every Monday for four years, has gone through death, illness and life’s stresses together. For Conley, it is just another group added to his ever-growing family.

“It’s an opportunity to start the week off right, and touch base with everyone and see if we need to pray about anything,” Conley said.

At 7:45 a.m., three students and six faculty members joined Conley in the cramped outdoor space. Many swayed side to side in puffy coats to stay warm, and the Chief warmly greeted each person with a quick check-in. Once all the regulars arrived, Conley began.

“Is there anything anyone would like us to pray about today?”

One student mentioned her stressful finals schedule. After the requests concluded, Conley and the group of nine bowed their heads and closed their eyes in prayer.

Lasting no longer than five minutes, Conley featured every member of the group in his blessing. He prayed in a way that seemed to relieve the group’s stresses, and provide them with the strength to push through the week ahead.

Once he concluded, the group slowly opened their eyes to the sight of a now brightly lit, crisp morning. Conley took a moment to direct the group to the bag of donuts and stuck around for conversation before the group headed to classes.

Before Conley left to begin his day, a faculty member asked if he plans to retire.

It is a question the 62-year-old has gotten a lot recently. His youngest daughter — the one who brought him to Butler in the first place — will graduate this May. Conley quickly brushed off the question.

“I take it one year at a time,” he said. “I love it here. I love the Butler environment.”

Conley has a goal for when he does eventually retire which he speaks of proudly. When the time comes, he wants someone to walk down the hall and ask, “Hey, where’s the chief? I haven’t seen him.” The reply is simple. “John? He retired three months ago.”

As the leader of the department, Conley said he hopes he prepared each of his officers to take over effectively. As a man with experience, heart and dedication, Conley’s job is what fuels his happiness and fulfills him.

“It’s an opportunity, not a task,” Conley said. “It’s not a ‘I have to go to work.” For Conley, this is the ultimate blessing. He closed with a grin on his face, “I get to go to work every day. That is how I see it.”