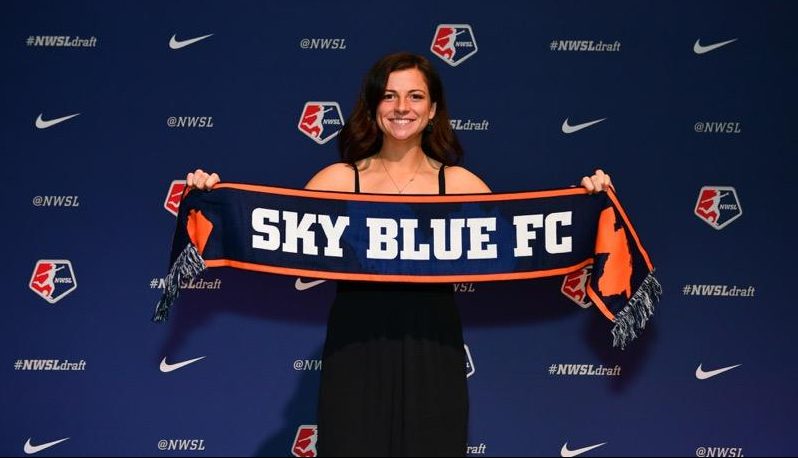 When Paige Monaghan stepped up to the podium after being chosen by Sky Blue FC with the 10th pick of the National Women’s Soccer League Draft on Jan. 10, she immediately forgot everything she had planned to say.

Not only is the Succasunna, New Jersey, native realizing her dream of becoming a professional soccer player, but she will be doing so at Yurcak Field in Piscataway, half an hour from home.

“Everything felt so right, and everything felt so normal even though it was not a normal situation to be in,” Monaghan said. “I was extremely blessed and as I was walking up. I kind of get into a zone when things are either really crazy or really good, so I just spoke from the heart.”

After her name was called, Monaghan donned a Sky Blue scarf and took a picture with NWSL president Amanda Duffy.

“It was the best feeling I’ve felt so far in my entire life,” the 22-year old said. “It was pretty amazing.”

The first Butler women’s soccer player ever to be picked in the NWSL Draft, Monaghan scored 22 goals and assisted on 18 more in her four years as a Bulldog. She was the 2017 Big East Offensive Player of the Year and a two-time All-Big East First Team selection.

Following the end of her senior season this past November, Monaghan took an entire month off from soccer before turning her attention to preparing for the draft and conditioning. She graduated in December, so she could focus exclusively on the draft.

“It’d been a long time in planning in terms of making that happen,” Butler co-head coach Rob Alman said. “She did all the work she needed to do with of classes in the summer and shifting her schedule around and everything.”

Multiple teams expressed interest in drafting Monaghan, including Sky Blue. Alman said head coach Denise Reddy was in contact with Monaghan and both Butler head coaches early on, discussing “every different topic you can imagine.”

The NWSL draft process is full of unknowns. There is no pre-draft evaluation or combine, which means teams base picks solely off how players performed in college.

“I don’t really get nervous for games anymore, but this I was nervous for because you’re putting everything on the line and there’s no combine like the men,” Monaghan said. “There’s no, ‘Oh, how can I prove myself now?’ Did my body of work over the past four years impress the right people?’”

Former teammate Madison Toth wasn’t surprised to see Monaghan selected with the first pick in the second round.

Monaghan becomes part of a rebuilding project at Sky Blue she likened to her experience at Butler. Sky Blue finished last season with a 1-17-6 record, scoring 21 goals and conceding 52 in 24 games.

Prior to Monaghan’s arrival, the Bulldogs hadn’t won 13 games in a season since 2002. They did so three times during her career and reached the NCAA Tournament for the first time in program history.

“Coming to training every day and being the one that’s just ready to go,” Alman said. “That just automatically has an instant effect on the three or four people that you’re first in contact with and that goes through a team pretty quickly. It’s pretty contagious.”

For Monaghan, her belief in what Sky Blue head coach Reddy is building and being close to family make this opportunity even more special.

“Coach Reddy just was so sincere and so genuine and had such an awesome vision,” she said. “It’s great going home, and I can promise there’s going to be a lot of fans from the Monaghan clan.”

Even with the step up in competition, Alman is confident Monaghan will have a smooth transition to the professional game.

When the season gets underway, her friends and family will be watching.

“I’m just so excited to be able to watch her play because watching her play is one of the best things ever, watching her fly down the sideline and just cream someone,” Toth said. “I’m just really excited for her.”

Monaghan and the rest of Sky Blue’s players will report for preseason training next month. The NWSL regular season schedule has not been released yet.

“She’s a worker and she doesn’t shy away from having to prove herself every step of the way, which I think she did through her youth career and then came here and did it through her collegiate career,” Alman said. “We expect nothing different in the pros.”