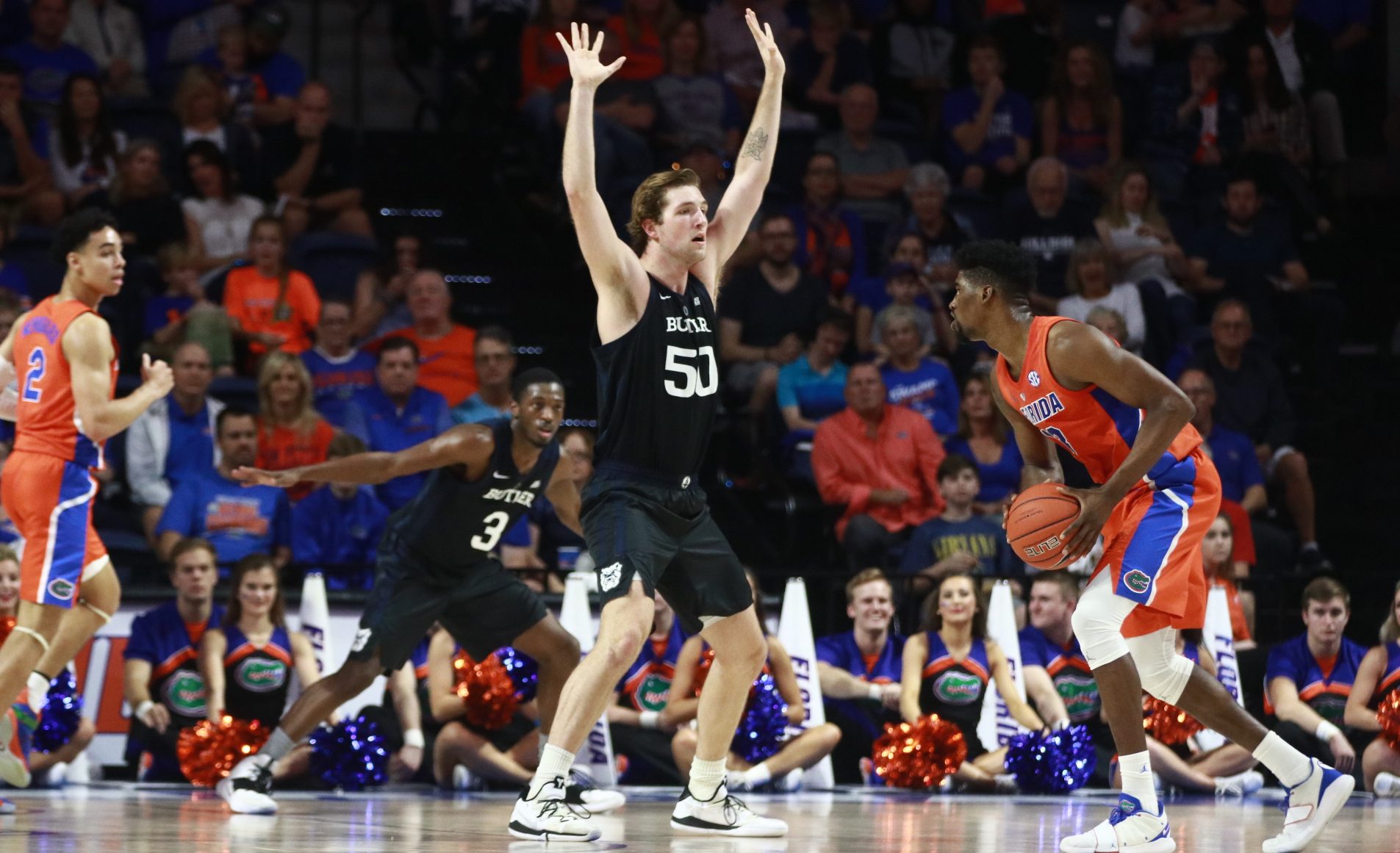 Joey Brunk on defense against Florida earlier this season. Brunk and the Bulldogs travel to Seton Hall on Jan. 9.

After a much-needed win against Creighton, the Butler men’s basketball team heads to Seton Hall to face the Pirates in its first Big East road game. Here’s what you need to know before the matchup.

Butler’s nonconference performance doesn’t provide it the luxury of only winning home games in the Big East. Simply going 9-9 probably won’t be good enough to get the Bulldogs in the NCAA Tournament, not to mention they’ve already dropped a home game in Big East play. The point is, Butler needs road wins to strengthen its resume and a win at Seton Hall would be a good one. The Pirates have looked vulnerable at home this season, losing to Louisville and Saint Louis inside the Prudential Center while beating Kentucky at Madison Square Garden during nonconference play. Butler needs road wins and this is a game it can absolutely win that can boost its resume.

When Seton Hall wins, they shoot the three well.

As of Jan. 9, Seton Hall is 267th in the country in 3-point field goal percentage, which isn’t exactly scary. However, when Seton Hall gets big wins, they shoot the ball well. Against Kentucky, they knocked down 11 3-pointers while shooting 42.3 percent from deep. At Maryland, another top 20 KenPom team, the Pirates made eight 3-pointers and shot just under 40 percent. On the flip side, when they got blown out by Nebraska earlier this season, they went 2-for-16 from beyond the arc and went 3-of-18 in a home loss to Louisville. The Pirates aren’t an explosive offensive team and protecting the 3-point line makes them that much easier to guard. Butler did a really good job of that against a great 3-point shooting team in Creighton, so, in theory, the Bulldogs should be able to do that again Seton Hall.

Butler’s big men were awesome against Creighton. (and Myles Powell)

Against Creighton, Joey Brunk and Nate Fowler combined for 24 points on 7-of-15 shooting and Fowler knocked down three 3-pointers. He clearly had a newfound confidence from distance against the Bluejays and that ability to shoot will pull Seton Hall’s big men away from the basket, giving Butler’s guards more room to operate and making them that much harder to guard.

If Butler stops Myles Powell, the Bulldogs will win this game. The junior guard is averaging 22.2 points per game while playing over 35 minutes per contest. He shoots the ball at a decent clip —  37.7 percent from deep — and shoots 87 percent from the foul line. In Seton Hall’s most recent loss to DePaul, Powell was held to just 16 points on 4-of-13 shooting. Doing anything to disrupt Powell and keeping him off the foul line will force the Pirates to look for scoring elsewhere. Powell is the only double-figure scorer for the Pirates, and forcing other players to step up on offense means good things for Butler.