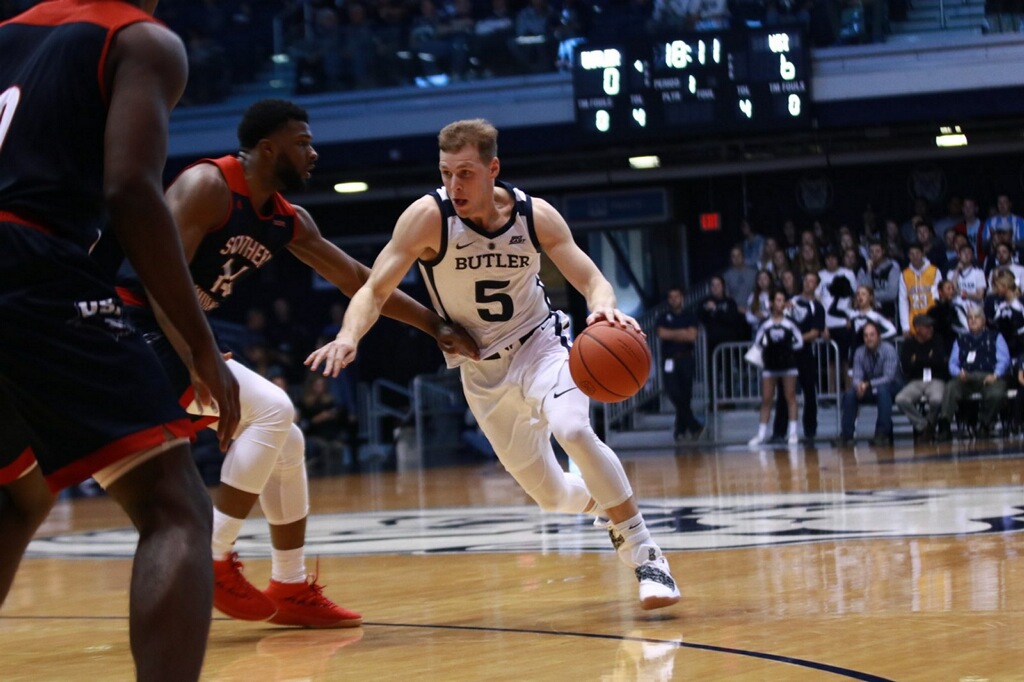 Paul Jorgensen drives to the basket against Southern Indiana. Jorgensen and the Bulldogs open the regular season at home against Miami (OH) on Nov. 10. Jimmy Lafakis/Collegian file photo.

The Butler volleyball team will host its last ranked team of the season as the Bulldogs face off against the 19th-ranked Marquette Golden Eagles. These two met in the second week of October, but it was Marquette who came away with the win in a 3-0 sweep. As the penultimate home game and the final home night home game of the season, Dawg Pound will be hosting their annual Chick-fil-A Night for its members. First serve from Hinkle Fieldhouse is set for 6 p.m.

Coming off of two successful events in the Big East Championships, the men’s and women’s cross country teams will participate in the NCAA Great Lakes Regional event in Terre Haute, Indiana. At the Big East Championships two weeks ago, the men finished third while the women took fourth place in the event. Both of last year’s teams met their season’s end at the regional meet as the men took seventh and the women placed 20th in a stacked field. The first gunshot will sound at 11:15 a.m.

On Friday, the women’s basketball team will open up its regular season play with a matinee matchup with the Eastern Illinois Panthers. This is the beginning of a six-game homestand to start the regular season for the Bulldogs before they travel to Bloomington to take on in-state rival Indiana in the first week of December. Eastern Illinois is coming off of a rough season where they lost 26 of 29 games and were winless away from home. Tipoff from Hinkle Fieldhouse is at noon.

Family weekend at Butler kicks off with the Butler football’s senior day against Stetson. After winning three of their first four games, the Bulldogs have lost five straight PFL matchups to plummet them to a tie at the cellar of the league. On the flip side, the Stetson Hatters are 5-1, with their lone loss coming at league power San Diego. Butler will honor the careers of the 15 seniors who will play their final game at the Sellick Bowl. Kickoff is at noon.

The men’s basketball team will open up its regular season play with a non-conference match against the Miami (OH) RedHawks. The Bulldogs are coming off of a couple of comfortable wins in their exhibition slate led by senior Paul Jorgensen’s 17.5 points per game. Miami’s leading scorer from a season ago is last year’s MAC Freshman of the Year Nike Sibande, who Bulldog fans may remember from the 2017 Indiana state champion Crispus Attucks team. The already-sold out regular season opener will tip from Hinkle Fieldhouse at 7 p.m.

The Butler volleyball team will close its 2018 home slate with a match with the DePaul Blue Demons on senior day. The Bulldogs squandered a 2-1 set lead in Chicago in these team’s last meeting. The team begins this week just two games back of potentially earning a spot in the Big East tournament. Butler will be celebrating the careers of seniors Bri Lilly and Taylor Takeda as the final home volleyball game of the season will begin at 2 p.m.