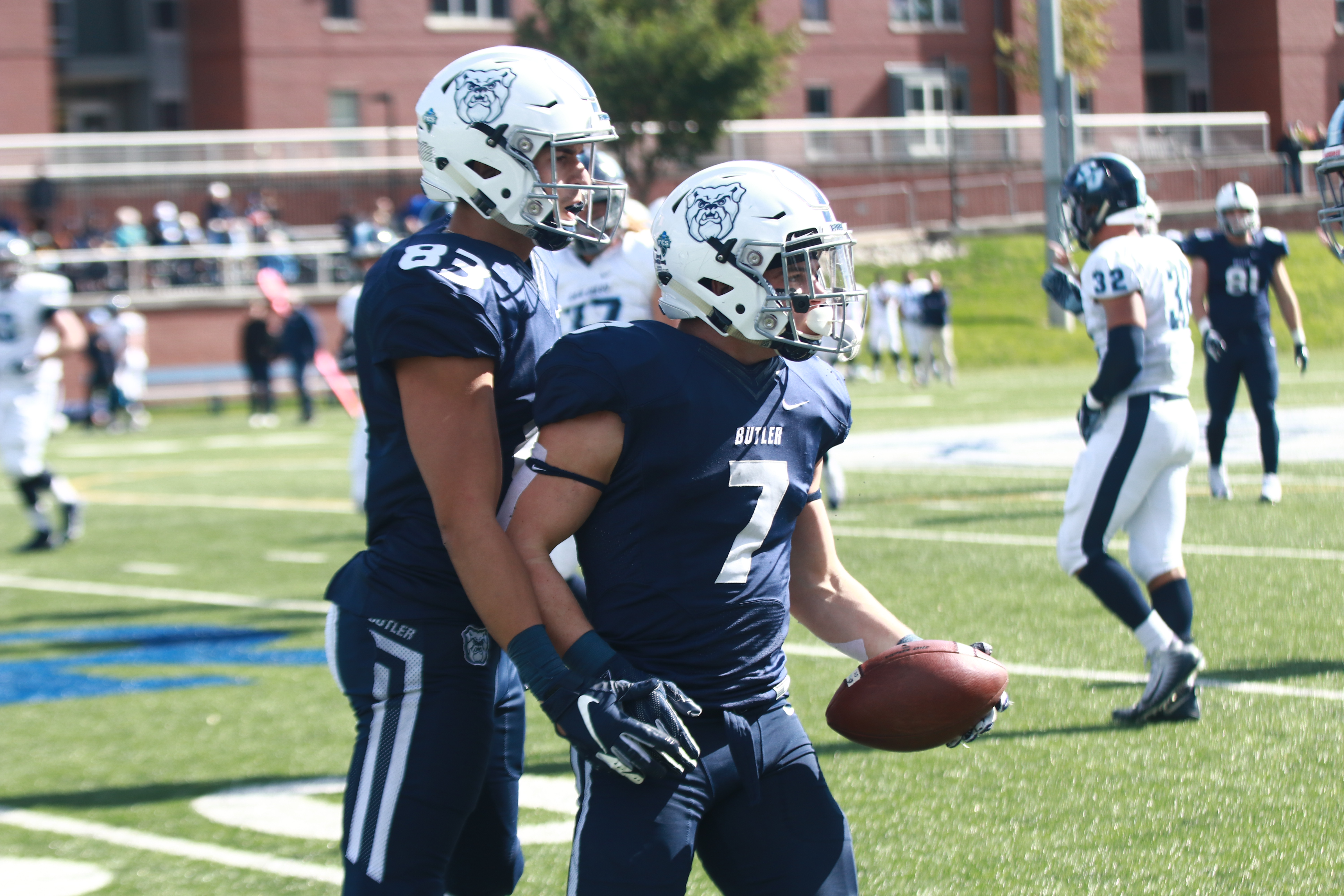 Brad Sznajder (7) and Stephen Dennis (83) celebrate after a play. The Bulldogs travel to Davidson for their final game of the season. Jimmy Lafakis/Collegian file photo.

After defeating Miami (OH) in their opening game, the Butler men’s basketball team has a short turnaround to face former Horizon League foe Detroit Mercy. The Titans made a splash in the offseason by hiring former Indiana coach Mike Davis, but they were projected to finish last in the Horizon League. These two haven’t met since 2012, when Ray McCallum’s 20 points lifted Detroit over Butler in Hinkle Fieldhouse. Tip is scheduled for 6:30 p.m.

After trouncing the Eastern Illinois Panthers on Friday, the Butler women’s basketball team hosts yet another Ohio Valley Conference member in the Murray State Racers. The Racers were the only team to finish behind Eastern Illinois in the Ohio Valley preseason poll. Nevertheless, Murray State should be coming into Hinkle with some confidence after a 58-point win over Oakland City on Saturday. Tip is set for 7 p.m.

As students begin to head home for Thanksgiving Break, the Butler men’s basketball team finishes up their homestand to begin the season with a tilt against the Ole Miss Rebels. After a rough season for Ole Miss last year, they brought in former head man at Middle Tennessee in Kermit Davis. He will be tasked with rebuilding a Rebel team that was picked for the cellar in an improved SEC. This is the last home game for Butler until December 5th. The game will tip at 8 p.m.

After not competing for a couple weeks, the Butler women’s swim team is back in action as they make the short trek to IUPUI’s natatorium to compete in their House of Champions Invitational. The Bulldogs finished seventh in this competition last fall. In their last meet at Olivet Nazarene, sophomore Sydney Gurry recorded a Big East qualifying time in the 200 Breaststroke event. The meet will begin on Friday and events will take place all the way through Sunday.

Having been officially eliminated from Big East Tournament play, the Butler volleyball team will attempt to play spoiler against the Villanova Wildcats. Villanova is in a close race with Xavier and Georgetown for the fourth and final spot in the postseason tournament, and the Bulldogs will look to complete their second season sweep of the Wildcats in the last three years. First serve from Villanova, Pennsylvania, is set for 7 p.m.

After an emotional win over Stetson on Senior Day, the Butler football team will end its season on the road against the Davidson Wildcats. After winning two out of their first three conference games, Davidson has lost four straight games, pushing them to a similar 2-5 conference record to Butler. These two teams didn’t meet last year, but Drew Bevelheimer used a last second kick to knock off the Wildcats in 2016. The Bulldogs look to defeat Davidson on their senior day and end the season on a high note as kickoff from Davidson, North Carolina, is at 1 p.m.

Despite solid showings from both the men and women in the Great Lakes Regional meet, Butler’s Euan Makepeace will be the only Butler representative in the NCAA Championships on Saturday. Makepeace finished 13th overall at the meet, finishing the course in just over 31 minutes. He will travel to Madison, Wisconsin, at a course Butler ran earlier in the year, on Saturday to compete for an individual title.

On Saturday, the women’s basketball team will host the Western Illinois Leathernecks. WIU comes out of the Summit League, where they were 10-4 in conference last year and received an invitation to the NIT before being bounced in the first round. They were voted to finish in the same position in the preseason rankings this year. Tipoff from Hinkle Fieldhouse is scheduled for 2 p.m.

To cap off a busy week in Butler sports, the volleyball team will wrap up its season with a match against the Georgetown Hoyas. As mentioned earlier, Georgetown is part of that three-team pack fighting for the last spot in the Big East Tournament. For the Bulldogs, this will be their last game of the season, as they look to avoid the season sweep and spoil the Hoyas’ senior night and possibly their season as the match will begin at 5 p.m.