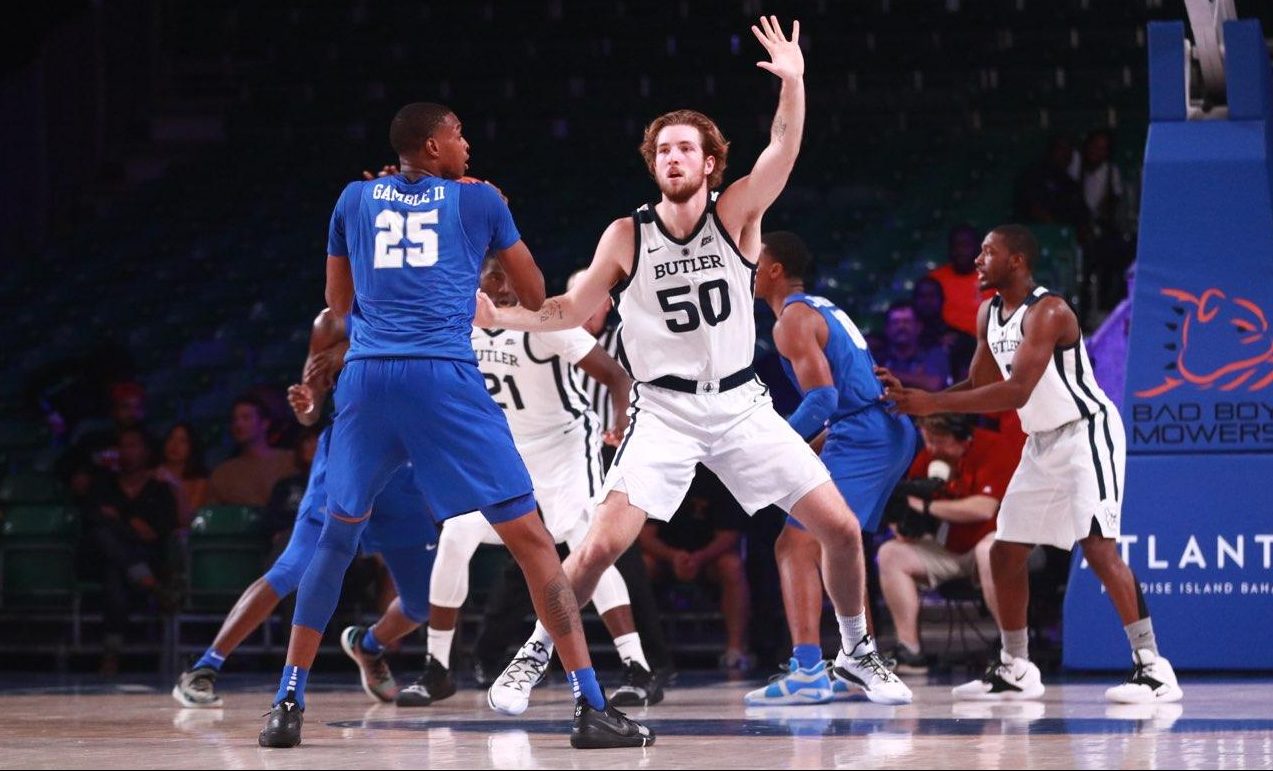 Joey Brunk guards the ball against Middle Tennessee State. Brunk and the Bulldogs face Florida in their final game of the Battle 4 Atlantis tournament. Photo by Jimmy Lafakis.

Coming off an impressive bounce-back win against Middle Tennessee State, the Butler men’s basketball team finishes their feast week tournament against the Florida Gators as they try to leave the Bahamas with a winning record. Here’s what you need to know.

Who: Butler vs. Florida

Three games in three days is not common in college basketball. Very rarely are teams asked to play high-level opponents in three consecutive days. The Bulldogs answered the bell against MTSU, playing one of their better games of the season on the second night of a back-to-back. Now both Butler and the Gators are onto game three. The team that’s more focused and active will probably come away with the victory. Energy is always important, but on the back end of a long week, it could really be the difference between a win and a loss.

Make the Gators shoot it

So far this season, Florida has struggled from the 3-point line, shooting only 32.5 percent as a team. KeVaughn Allen and Deaundrae Ballard, Florida’s leading scorers, are both struggling from beyond the arc but shoot over 80 percent from the charity stripe. If Butler can keep these guards in front of them and defend without fouling, chances are they’ll have a more difficult time scoring the basketball. As for the rest of the Gators roster, there are four players playing over 16 minutes per game that are 60 percent or worse from the free throw line. “Make the Gators shoot it” means different things depending on who the personnel is but the underlying goal is no easy baskets.

Sean McDermott (and the rest of Butler deep threats)

Sean McDermott has been fantastic in paradise, shooting 12-21 from behind the 3-point point line and scoring 39 points in two games. McDermott’s deep threat makes Butler so much harder to guard. His shooting gives Kamar Baldwin and Aaron Thompson more room to get to the rim and Joey Brunk and Nate Fowler have more room to operate down low, all of which is a good thing. In addition to good shooting, Florida is 102nd in the country in three-point defense. McDermott and Paul Jorgensen, who is also shooting better than 40 percent from three this season, will be key as the Bulldogs look to leave the Bahamas with a 2-1 record.