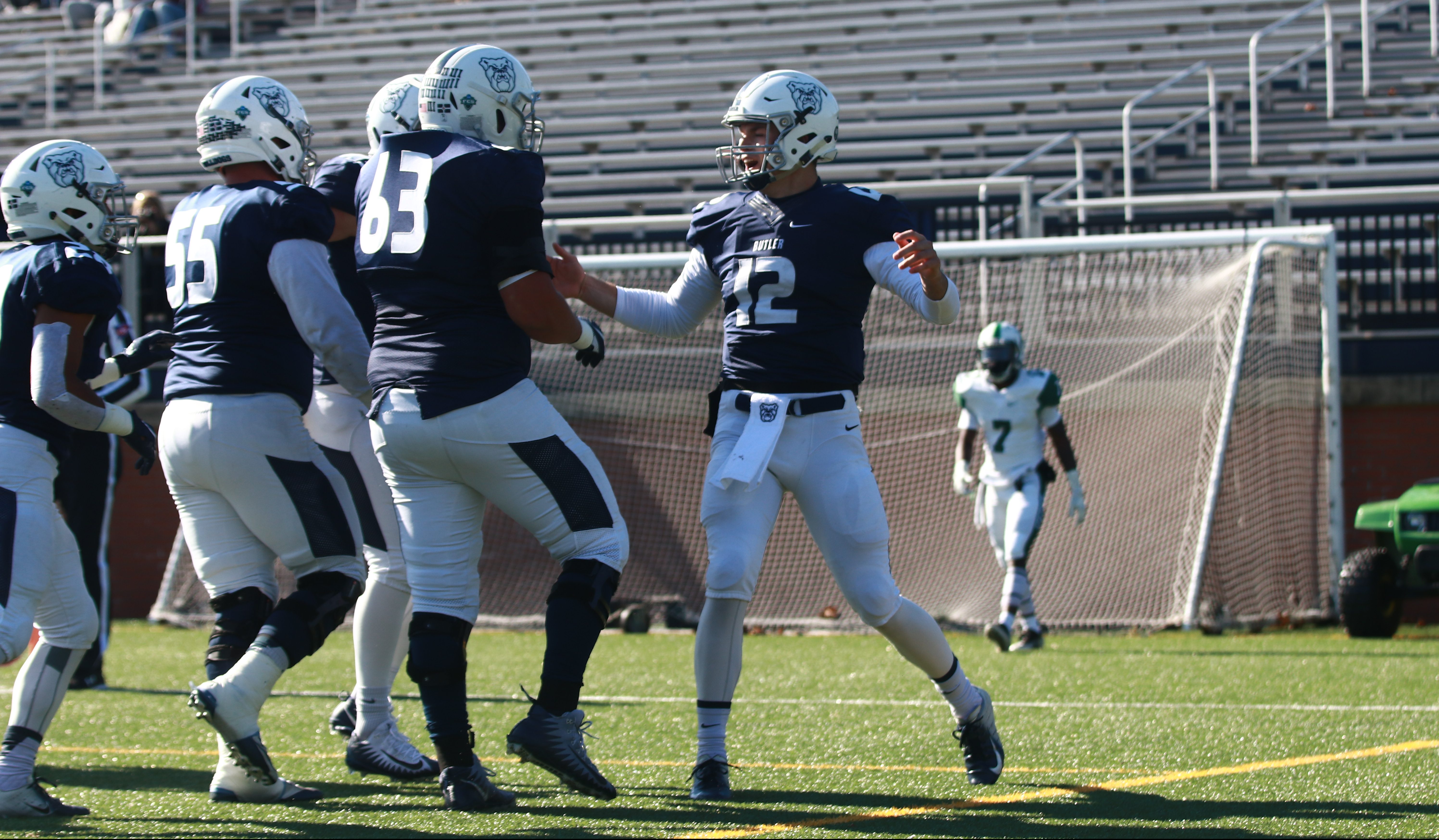 Will Marty celebrates with his teammates following a touchdown against Stetson. Marty threw for 266 yards in Butler’s 28-23 victory. Photo by Jimmy Lafakis.

The Butler University football team broke their losing streak with a 28-23 home win over Stetson on Nov. 10.

For the first time since their last win on Sept. 29, the Bulldogs got on the board first with a 4-yard touchdown run by junior running back Brad Sznajder.

The first play of the drive saw senior wide receiver Pace Temple box out a defender and take to the air to grab down a high pass in what ended up as a 22-yard gain.

“We needed to start fast and to settle in and get some drives early,” head coach Jeff Voris said. “It was important, but just as important was the continuous, 60-minute effort that we got from the defense.”

For the most part, the defense played well. Even when Stetson scored, they had to work for it.

On the drive following Butler’s touchdown, the Hatters were pushed to a fourth and 17 but managed to convert and eventually score.

The Bulldogs saw their first deficit in the game after Stetson scored again early in the second quarter.

A 14-yard touchdown run on a scramble by senior quarterback Will Marty regained the lead for Butler. The drive came to a fourth and eight at one point, but Marty found junior tight end Stephen Dennis to move the chains.

“Will has done a great job all year,” Voris said. “He understands what’s trying to get done. He’s a coach on the field. He’s constantly coming up with great suggestions and ideas.”

Dennis had a breakout game of his own after having produced steadily all season.

“It’s kind of the way it’s been all year for us offensively,” Voris said. “At some point they doubled Pace [Temple] and tried to take him out of the game and then who’s going to be the guy that steps up in that situation? The nice thing with us is all year, it’s been different guys. Whether it’s been the offensive line or other receivers or the tight end or the running game with [Anthony] Scaccia and Brad [Sznajder]. It just happened to be that it was Stephen’s number called today and he pulled away twice on great plays and much needed plays.”

Dennis’ touchdowns sandwiched a Stetson field goal, all of which gave Butler a 28-16 lead early in the third quarter.

Defense dominated the rest of the quarter.

Stetson’s touchdown with 6:45 remaining in the fourth quarter brought them to within five points.

Butler drained all but 23 seconds of the clock with a 13-play drive. The drive was nearly much shorter but was saved by a 15-yard Marty run on a third and 13.

“[Offensive Coordinator Kyle] Conner did a great job as far as calling it,” Voris said. “That was a huge four-minute drive to try and run the clock out and get some key first downs on key play calls by Coach Conner. Key execution by all 11 and, certainly Will gets a lot of the credit, being the quarterback, but it was 11 guys doing their job that made the drive.”

Stetson got to Butler’s 31-yard line with four seconds remaining but a throw into the endzone was batted down and fell incomplete.

“They love the game and they truly enjoy each other,” Voris said. “This group wasn’t going to crumble, they kept showing up and preparing. They’re excited to get one more chance.”

That chance will come at Davidson, where Butler will play its final game of the year on Nov. 17.

Butler moves to 2-5 in conference play and 4-6 overall.

“This one’s special for us because it had 22 seniors that played the last game in the [Sellick] Bowl and really the group as a whole, the 100 plus that won’t be together again coming up the tunnel like that,” Voris said. “It gave us the drive and the focus to prepare and to keep going and it’ll be a bittersweet time next week when the guys all get together for the last time.”