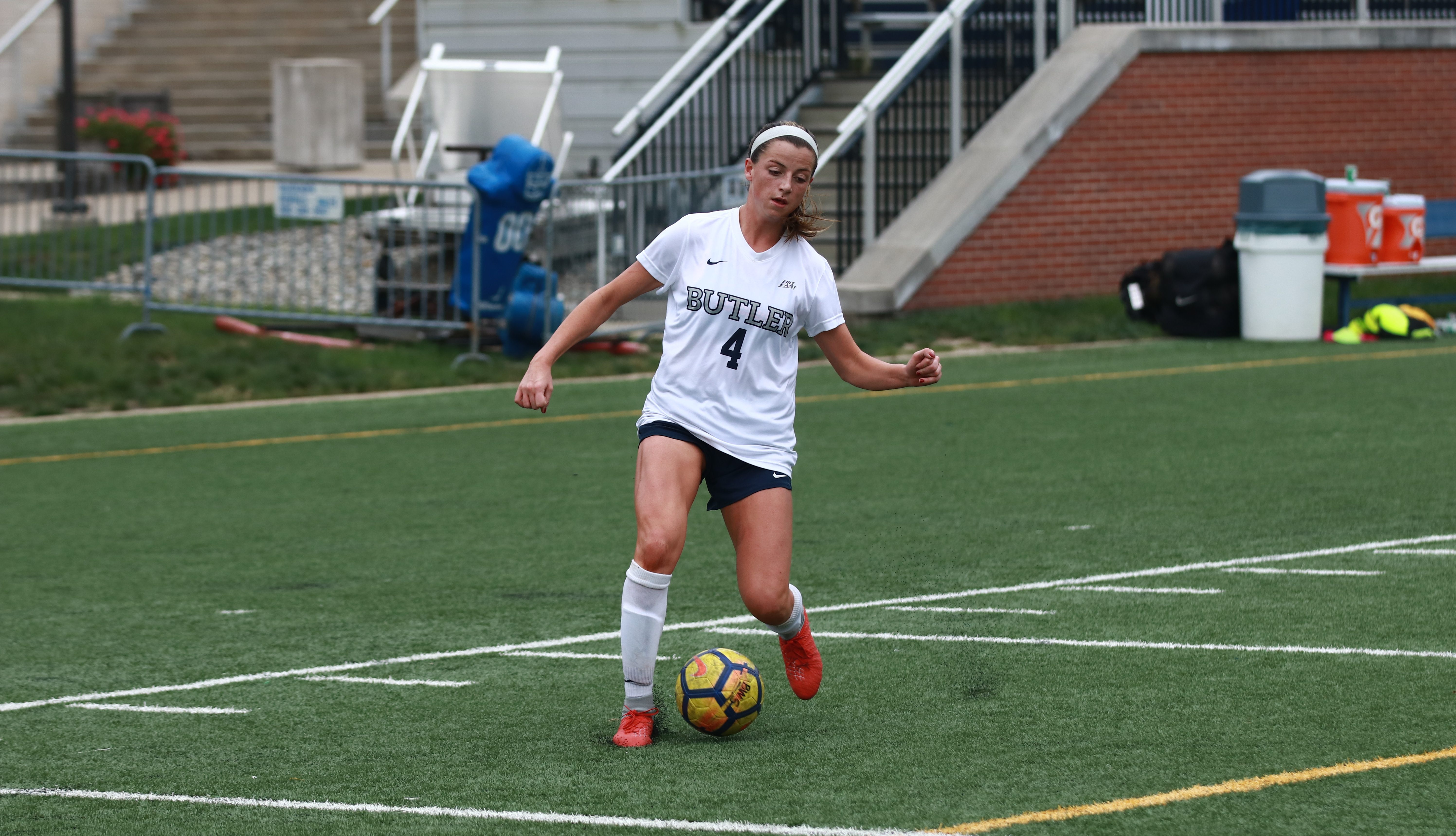 Paige Monaghan handles the ball during a game this season. Monaghan and the Butler women’s soccer team will square off against Providence in the Big East semifinals on Nov. 1. Jimmy Lafakis/Collegian file photo.

We start off this week with a Halloween men’s soccer showdown between the Butler Bulldogs and the Xavier Musketeers. In last year’s match, the 15th-ranked Bulldogs pulled away 2-1 to cap off a successful regular season. Butler has been eliminated from postseason play, but could play spoiler as Xavier is slotted at sixth in the Big East standings. The Bulldogs will look to knock off their archrival on their Senior Night as the match is scheduled for 7 p.m. at the XU Soccer Complex.

The Butler women’s soccer team kicks off their postseason play with a date with the Providence Friars in the semifinals of the Big East Tournament. The Bulldogs received a bye in the quarterfinals due to their second-place finish in the regular season. Providence defeated St. John’s 1-0 in the quarterfinals on Saturday. In their meeting with the Friars this year, Madison Toth scored her first career goal which proved to be the winner for Butler at the Sellick Bowl back in September. The game is set to begin from the Sellick Bowl at 7 p.m.

The Butler women’s basketball team opens up the season with its lone exhibition game of the season against the Trine Thunder. A Division III school out of Angola, Indiana, Trine is coming off a wildly successful season with 26 regular season wins, a conference championship, and a trip to the Sweet 16 of the Division III Women’s Tournament. This will be Bulldog fans’ first chance to see the team led by fifth-year coach Kurt Godlevske. Tipoff from Hinkle Fieldhouse is set for 7 p.m.

The men’s tennis team will wrap up its play in the fall semester with a trip Cleveland, Ohio, to compete in the Viking Invitational hosted by Cleveland State. The Bulldogs defeated the Vikings five matches to two in their spring meeting last year. As former Horizon League members, this invitational will take old Butler sports fans back to the times where these two would play annually in all sports. The invite begins on Friday and will finish on Sunday.

The Butler volleyball team will get a shot at redemption on Friday as they host the Xavier Musketeers. The Bulldogs won the first set against Xavier at Hinkle Fieldhouse earlier this month before surrendering the next three sets to the Musketeers. Butler has struggled on the road this year, only winning two matches against Providence and Seton Hall, last and next-to-last, respectively, in the Big East standings. The match will start from the Cintas Center at 7 p.m.

After winning three out of their first four games, the Butler football team has dropped four in a row, all in PFL play. However, they will get a real chance to turn that tide as they travel to take on the Jacksonville Dolphins, who have lost six in a row and have yet to pick up a conference win this year. Ironically, in last year’s game at the Sellick Bowl, it was the Bulldogs who handed Jacksonville their first PFL loss of the year, 37-22. With the Colts and Jaguars on bye and playing next week, hometown fans from both cities can get their football fix as the game is set to kick off from D.B. Milne Field in Jacksonville at noon.

The Butler men’s basketball team will wrap up its exhibition play with a game against the Southern Indiana Screaming Eagles. A Division II school just outside of Evansville, Indiana, the Screaming Eagles will be continuing their tour of historic Indiana venues as their game in Hinkle will be just two days after visiting Assembly Hall and the Indiana Hoosiers. While they shouldn’t be a challenge for the Bulldogs, USI is coming off an exhibition win at DI Eastern Illinois last year. Tip off from Hinkle Fieldhouse is at 4 p.m.

Should the Butler women’s soccer team win their game against Providence, they will advance to the Big East championship game, a game with which they are familiar as they were runner-ups last year and won the conference in 2015. The two-time defending champ Georgetown Hoyas would be host of this game if they win their semifinal, but the game would be played at the Sellick Bowl if Butler were to advance and Georgetown loses. The match starts at 1 p.m.