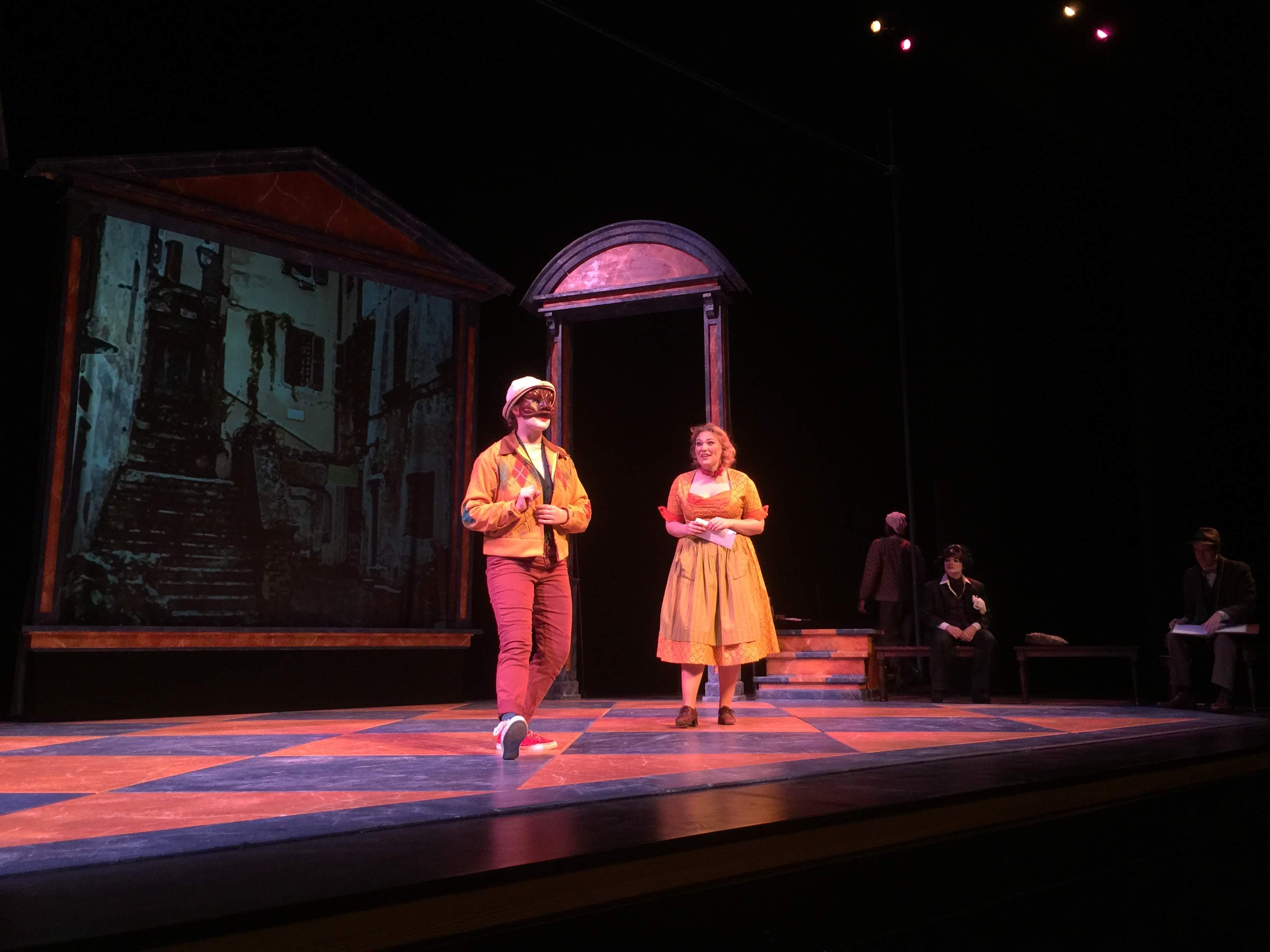 Students rehearse for their fall theater performance, “The Servant of Two Masters.” Photo by Kelly Schwantes.

Sarah Ault, a sophomore theater major and one of the show’s two masters, explained the show is exactly what it sounds like. Arlecchino, the servant, finds himself in a predicament when he not-so-cleverly decides to take on two masters. However, along with having to juggle two sets of commands, Arlecchino is unknowingly playing into unfolding drama between his two masters.

His first master, Beatrice Rasponi, has disguised herself as her dead brother to search for Florindo, who is both her brother’s assassin and the man she loves. Florindo, on the run from the law, just so happens to be Arlecchino’s second master. Beatrice and Florindo are subject to utter chaos brought about by Arlecchino’s attempts to avoid discovery.

Ault added that the show includes a unique twist, as it is performed in Italian commedia dell’arte style. According to the Metropolitan Museum of Art, commedia dell’arte is a theatrical form characterized by improvised dialogue and colorful stock characters. It emerged in northern Italy in the 15th century and rapidly gained popularity throughout Europe.

“It’s a way for people to learn about a different style of theater than what we’re normally exposed to through other Butler shows, TV shows and movies,” Ault said. “I feel like everyone will definitely laugh at some point in the show.”

Luly grew up in Italy surrounded by commedia dell’arte.

“We can improvise both during rehearsals and during the show, this is a comedy of mistakes,” Luly said. “We use our mistakes or we remake mistakes from rehearsal during the show, so the audience really cannot understand if it’s real or fake.”

Ault added that this performance style is unique because actors never leave the stage. Once they are done with their traditional role, they stay on stage and take on another role.

“On stage, we’re playing the show’s traditional roles and once that’s done, we’re portraying a different story with the audience where we’re a troop of actors putting on this show,” Ault said. “It adds something new to the show because it gives us more opportunity to have fun with what’s happening on stage versus off stage.”

Along with this unique performance from cast members, Luly added that the show will include unique, location-specific details.

“I love that every time the show is different and location-detailed,” Luly said. “You will see that we try to incorporate some culture of the place hosting the show, so you will recognize something that is American, something from Indianapolis, something from Butler, that makes this show unique to here.”

The Servant of Two Masters will be performed in the Schrott Center for the Arts from Oct. 31 to Nov. 3 at 7 p.m. Additional shows can be seen on Nov. 2 at 10 a.m. and Nov. 4 at 2 p.m. Tickets can be purchased for $19 on the Butler Arts Center website, and a free preview of the show will be performed this evening.