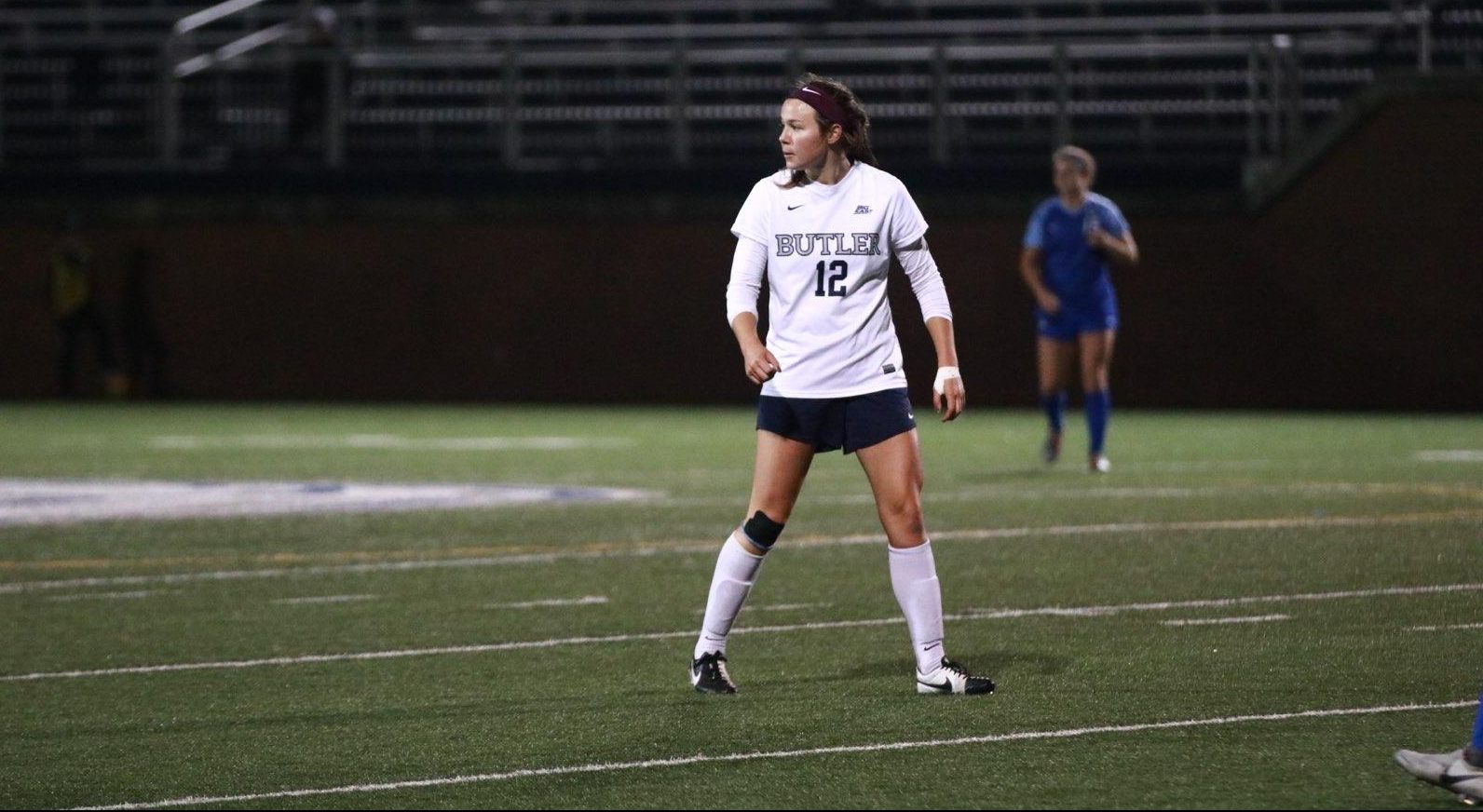 Halle Stelbasky surveys the field against Creighton. Stelbasky scored the only goal in the 1-0 victory. Photo by Jimmy Lafakis.

The Butler women’s soccer team improved to 11-4-1 (5-1-1) with a 1-0 win over Creighton on Oct. 18. A 76th-minute goal from senior forward Halle Stelbasky was all the Bulldogs needed to pick up the win over the Blue Jays.

It was the second time in the last two games that the Bulldogs have used a goal in the final 15 minutes to pick up a Big East conference win. Katie Soderstrom’s 88th-minute goal propelled the Bulldogs to a 2-1 win over DePaul on Oct. 14.

“I was particularly impressed with our patience. Obviously, Creighton is very organized and sat pretty deep and was hard to break down.” co-head coach Tari St. John said. “A lot of times you get that late in a game but I thought we were really professional about it and just kept at it and continued to create chances.

Butler goalkeeper Hannah Luedtke was rarely tested in a first half that saw the Blue Jays take only one shot, which did not come on goal. The Bulldogs held the advantage in the shout count 21-3 in the match.

Creighton goalkeeper Katie Sullivan kept the Blue Jays in the match with three saves in the first half.

The Bulldogs once again maintained control into the second half of play as Butler saw several opportunities that sailed over the top of the net. In the 55th minute, senior forward Paige Monaghan took a rocket of a shot that just cut the top crossbar.

The goal for the Bulldogs came after junior forward Macy Miller won a ball at midfield and played it to freshman forward Anja Savich. Savich lost control of the ball, corralled it, then dished it to Stelbasky who beat the defender on the near side and hooked the ball into the right side of the net.

Take a look at the strike from Halle Stelbasky to give the Bulldogs the 1-0 edge over Creighton #GoDawgs pic.twitter.com/E3hqzshaSD

“All it takes is one play to make the difference,” St. John said. “I thought Anja did incredible, after kinda losing the ball a little bit under her feet, to remain calm and composed to find the next pass which was Halle and from there Halle scored a screamer for us tonight.”

The Bulldogs’ second-half-goalkeeper Leonie Doege then closed the door on a potential equalizer to put away the Blue Jays.

With an 8-0 record, the Bulldogs finish undefeated at home for the second straight regular season, after an 8-0-2 record in 2017. The Bulldogs hold a 21-game unbeaten streak at the Sellick Bowl dating back to their last home loss to DePaul in October of 2016.

The Bulldogs will continue their Big East campaign on Oct. 21 against No. 4 Georgetown in a battle of the Big East’s top two teams in the standings. The Hoyas are undefeated on the season and have a stranglehold on the regular season conference title with two games left.