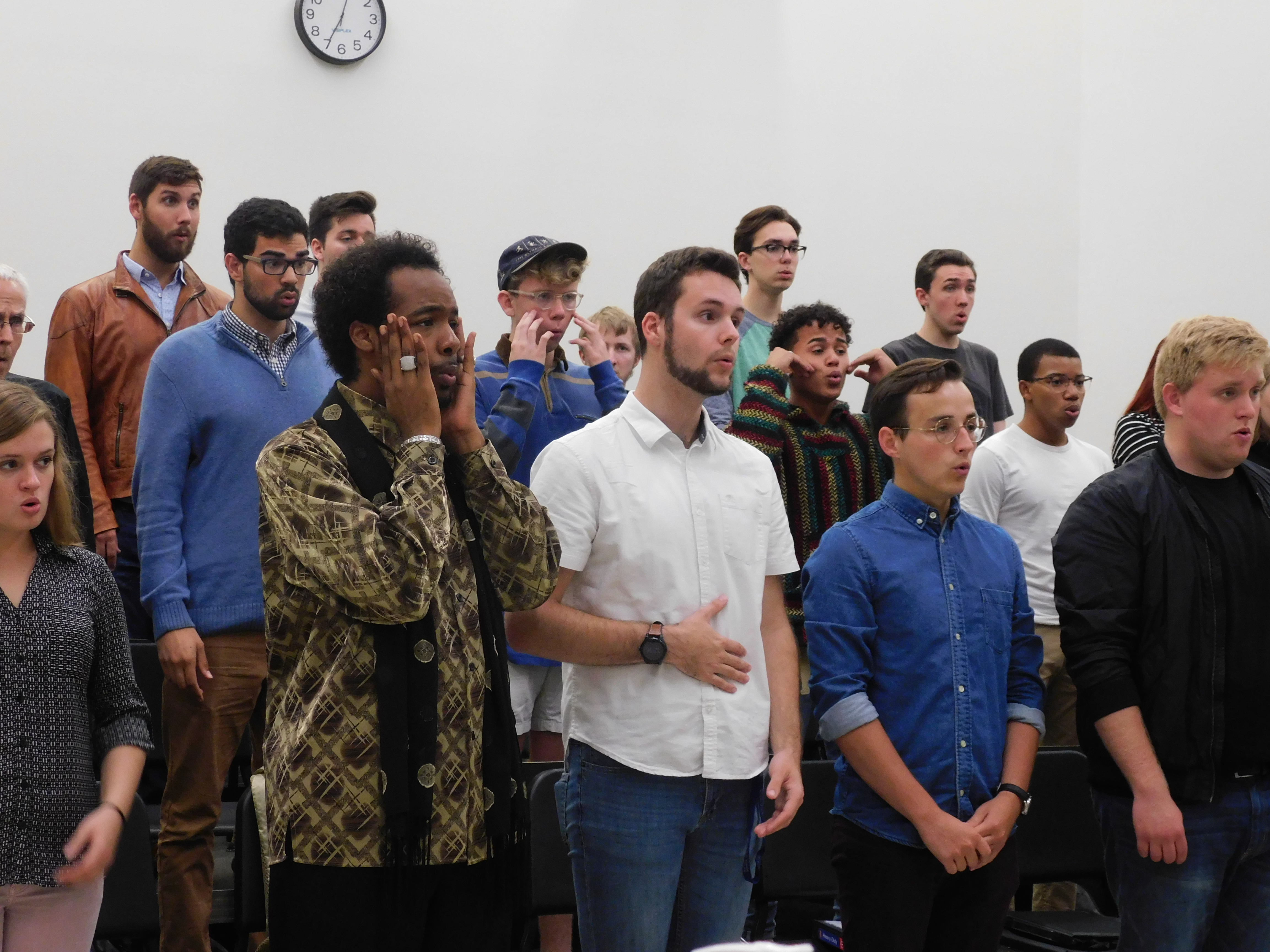 Students rehearse for the School of Music Showcase. Photo by Abby Glaws.

The Music at Butler series is starting again with the Music Showcase. Currently, the showcase has been performed at least ten times. This year’s showcase takes place on Sunday, Sept. 16.

David Murray, a faculty member at Butler University who is the professor of bass and director of the school of music, explained the basic details of the showcase. Generally speaking the Music Showcase features the Butler Symphony Orchestra, Percussion Ensemble, University Choir, and Butler Chorale. The director of orchestral studies, Richard Clark, will be the conductor of the Beethoven piece that features all four groups and some staff performers as well.

“It happens early in the season, which is not enough time for a single ensemble to prepare an entire program, and it also gives variety to the performance by having these different ensemble.” Murray added.

James Sterling, the president of the Butler Chorale, had this to say about his upcoming performance: “I think Butler students [may] be surprised to see so many familiar faces in Chorale, university choir, or any of the featured ensembles that will [be] performing this Sunday… I hope that they can appreciate the music and [take] time to reflect on the meaning behind the lyrics and musicality.”

While Murray is not a part of the concert, he did prepare his students and helped schedule the event. Kate Boyd, Butler University’s professor of piano and piano area coordinator is directly involved in the showcase as she is one of the soloists in the final number.

“The thing that I think is really cool at this concert is that it starts off with the Butler Percussion Ensemble, the ensemble is going to play some really interesting pieces by living composers and pieces that are very energetic,”  Boyd said. “The last piece [Beethoven] has a lot of people; the stage is completely full, including the piano, the big orchestra, both choirs and risers in the back and the four voice soloists. It is pretty exciting, it is like it is a cast of thousands. It is really cool to be a part of,”

Pieces by Ivan Trevino, Drew Worden, and a traditional West-African rhythm will be performed by the percussion ensemble. The choirs will perform songs by Randall Thompson and Haydn as well as a traditional Sea Isles spiritual. A piece by Smetana will be played by the orchestra. The night will end with all musicians coming together to play Beethoven with the faculty.

When asked about their favorite portion of the showcase, both Boyd and Murray had similar things to say.

Murray agrees and is proud of the students’ work for the production.

“It is exciting to be able to work with the students, in my case the bass section, to prepare the literature; but my favorite part will be actually sitting back and listening to the entire production. I feel like a proud parent when I hear student performances,” Murray said.

The Music Showcase will be performed at the Schrott Center of the Arts on Sunday, Sept. 16. Tickets are free with a Butler ID, $10 for the general public and students and seniors are $5. The tickets can be purchased online, at the door or at the box office.