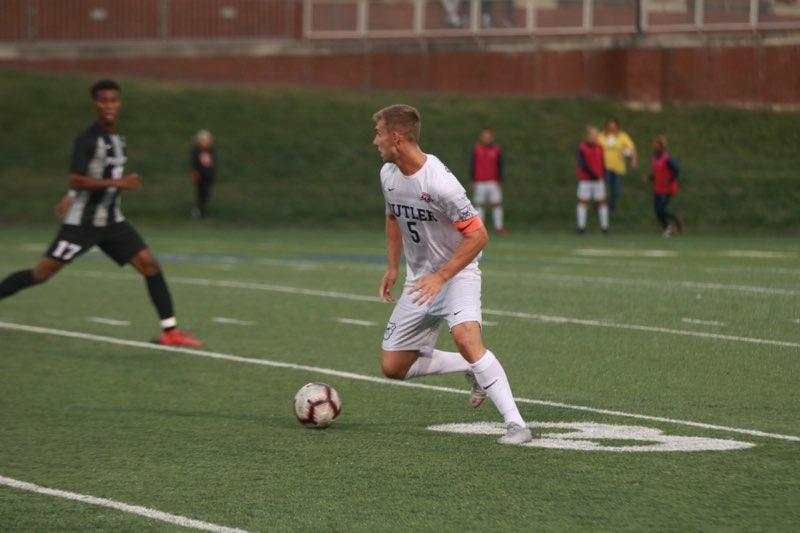 Jared Timmer searches for a teammate to pass to. Timmer and the Bulldogs have lost their first two Big East matches. Photo by Jimmy Lafakis.

The Butler men’s soccer team suffered their second straight defeat to open Big East play on Sept. 22, losing at home to Providence, 3-2. Butler is now 1-5-1 on the season.

The first half was a chippy affair, as the teams combined to acquire four yellow cards, three for the Friars and one for the Bulldogs. Butler opened the scoring in the 25th minute when Alex Lehtinen headed Jack Haywood’s free kick into the back of the net. It was Lehtinen’s first goal and Haywood’s first assist of the season.

Aside from the goal, the Friars were on the front foot for most of the first half. They held a 9-3 edge in shots but were unable to capitalize on multiple high-quality scoring chances in the opening 45 minutes.

The second half was a different story. Providence’s Andualem Chisholm got on the end of a ball over the top of Butler’s defense and slotted it home in the 59th minute to tie the match at one.

The Friars struck again in the 76th minute. Gil Santos beat Butler goalie Gabriel Gjergji to a cross and knocked it in to take a 2-1 lead. Santos then added a second four minutes later on a stunning shot from outside the box into the top left corner of the goal.

Lehtinen converted a penalty kick in the 88th minute to pull the Bulldogs back within one, but it was too little, too late.

“We thought we were there but we’ve gotta attack stuff,” Snape said. “You’ve got to be there on the front foot. Our guys aren’t on the front foot. We’re not doing doing it. We’re trying different ways and you know, we’re going to have to find it. I don’t understand right now why we’re not.”

Butler is back in action on Wednesday, Sept. 26, when they host Marshall University at the Sellick Bowl.