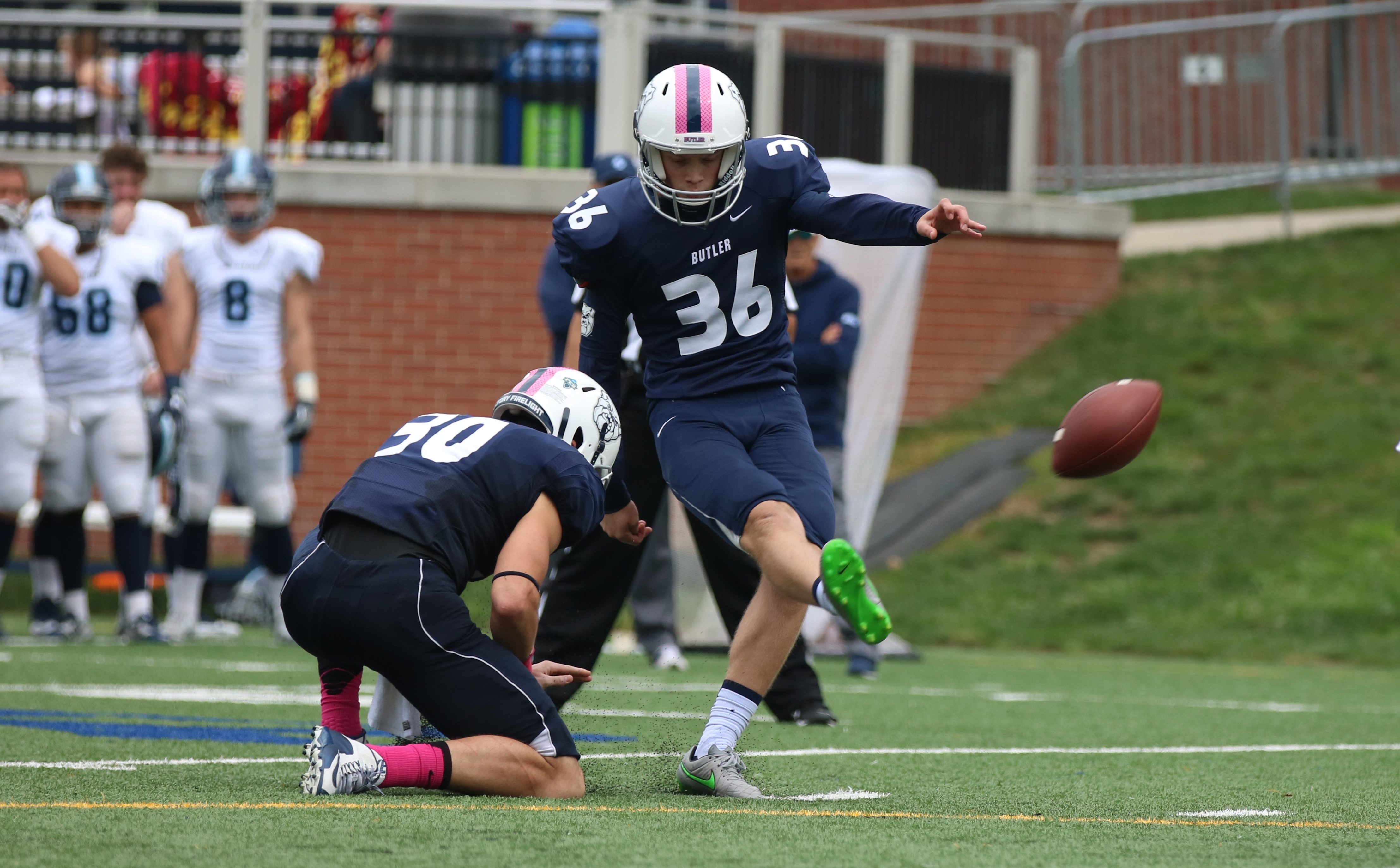 Upwards of 50,000 athletes play football at the collegiate level every year. Twenty-two of these athletes were named to the Allstate and American Football Coaches Association Good Works team on Sept. 13.

Among this group is Butler junior kicker Drew Bevelhimer.

While Bevelhimer may be an all-Pioneer Football League kicker, his on-field contributions are not the reason he made this team.

“Drew does such a good job of understanding that in a 24-hour day, there’s time to be great at more than one thing,” Butler head coach Jeff Voris said. “He really appreciates the opportunity to be a Division I athlete and recognizes that that window he has is a great opportunity to help people and impact his campus and community. He cares about people, and his first thought never seems to be of himself.”

The Good Works team, presented by Allstate and the American Football Coaches Association, recognizes players that have made significant contributions to their communities.

“The Allstate AFCA Good Works team has honored the college football players whose charitable involvement and community service contributions stand out among the more than 50,000 student athletes participating in the sport,” Allstate said in a press release.

Bevelhimer said that he cannot take sole credit for the award.

“Really, it’s a team thing,” he said. “It’s my name on the trophy, but it’s all hundred of our guys that helped me out with it — whether it’s our Team Impact stuff or helping out with the special needs clinic.”

One endeavor the team is involved in is Team Impact Organization. Through their partnership with the organization, the team signed eight-year-old Robert Shaffer as an honorary teammate. Shaffer was diagnosed with an incurable kidney condition.

He attends the team’s football practices and games and has his own locker in the team’s facilities.

Bevelhimer said he gets as much out of the relationship as Shaffer.

“He comes out here and has a smile on his face every day,” Bevelhimer said. “So why should I have a bad attitude walking out of the tunnel?  I just learned a lot from him, and I probably get a lot more out of him than he gets out of me to be honest. It gives me another view on life.”

Berkley Cohn, an assistant account executive for Taylor Strategy representing Allstate, said Bevelhimer’s relationship with Shaffer was a factor in honoring the kicker.

“Drew stood out to us just with his deep involvement and the fact that Robert [Schaffer] means so much to him and to the program,” Cohn said. “We thought it was a really special story.”

The impact Bevelhimer and the team have on Shaffer and other children with disabilities was apparent on Sept. 19, during a surprise presentation of the trophy for Bevelhimer. Before entering the field, Ean VanGordon, another child involved with the Butler football team, offered to help. VanGordon was born with numerous ailments that make it impossible for him to walk.

“I want to give him the trophy,” VanGordon said to local Allstate agent Darrell Frye, who was prepared to do the honor himself.

Frye obliged, and VanGordon handed Bevelhimer the award in front of the team.

Bevelhimer is also a key part of Butler’s youth clinic, which the football team runs every year for children with disabilities. Over the summer, he and nine other teammates spent time in the Czech Republic, Austria and Poland, teaching everything from English to football to physical education classes.

Bevelhimer said the charitable involvement he’s been a part of has taught him in a way that can’t be replicated.

“I think I get more out of it than anybody I’ve ever helped,” he said. “They show me so much more about life than I could ever learn by just being in a classroom or on a football field.”

The Allstate AFCA Good Works team will be taken to the 2019 Sugar Bowl, which will be played in New Orleans in January.

Approximately 49,750 college football players will not be in attendance.

But Drew Bevelhimer won’t be one of them.