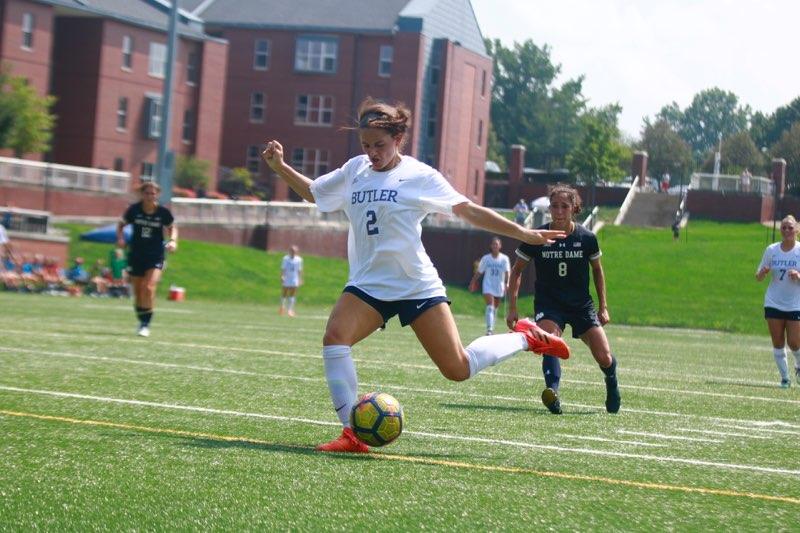 Katie Soderstrom takes a shot against Notre Dame. Soderstrom scored the first goal in a Butler uniform in the 4-1 win over the Irish. Photo courtesy of Jimmy Lafakis.

The fact that it was National Dog Day may have been a good omen for the Butler women’s soccer team as they took on No. 20 Notre Dame.

The Bulldogs used a three-goal second half and a two-goal performance from senior forward Paige Monaghan to knock off the Irish 4-1 and improve to 3-0 on the season.

It didn’t take long for Butler to strike first and grab a 1-0 lead. Monaghan netted her first goal of the season in the 2nd minute off a feed from freshman forward Anja Savich. The shot, from just inside the box on the right side, snuck into the bottom left corner for the only goal of the first half.

“Paige is relentless,” co-head coach Tari St. John said. “She played all but maybe 10 minutes for us today and when you have that kind of pace on the field, you’re always dangerous.”

Monaghan went on to shoot four of Butler’s five shots in the first half, including back-to-back shots near the 14th minute, one of which was stopped by the outstretched hands of diving Irish goalkeeper Mattie Interian.

The Irish’s best chance of the first half came near the 8th minute on two quick shots right in front of Bulldogs’ redshirt junior goalkeeper Hannah Luedtke. Sammi Fisher’s shot went wide left then Eva Hurm’s shot was blocked by the Butler defense.

Heat caused both teams to take multiple hydration breaks throughout the match as temperatures pushed into the low 90s off the field at the Sellick bowl. Weather forced the Bulldogs to move to a deeper bench.

“We thought we were a deep team but we didn’t really need it the first few games.” St. John said. “Today we desperately needed it and every player that stepped onto the field was prepared and I think it was a huge factor for us.”

Monaghan’s goal may have been the lone goal of the first half, but the second half was a much different story for both teams.

The Irish opened the second half with a penalty kick after a foul was called on the Bulldogs to the left of the net. After coming in for Luedtke, sophomore goalkeeper Leonie Doege layed out towards the right side to save the shot from Olivia Wingate and keep the Irish scoreless.

“That moment was probably the single most pivotal moment in the game because I think if we invite them back in and they equalize in that moment then it’s a totally different game then managing a game when you’re up 1-0,” St. John said.

Butler then tacked on two more goals in the 58th and 62nd minutes of the second half on two shots from inside the box. Freshman midfielder Morgan Kloosterman netted her third goal of the year from a Savich chance that was blocked by the Irish. After a Monaghan shot from way out on the right side, freshman midfielder Katie Soderstrom corralled the ball to score her first goal of the season and give Butler a 3-0 lead.

The Irish answered with a 69th minute goal by Olivia Wingate from right in front on the right side to make it 3-1.

In the 89th minute, Monaghan put the cherry on top for the Bulldogs as she got into open space and beat the lone defender for the Irish to score her second of the match and seal a 4-1 win for Butler.

Before the win over the Irish, Butler was 0-11 all-time when facing Notre Dame and was scoreless in the last four matchups.

“You beat Notre Dame 4-1 and that should give you some confidence but we are also a team that doesn’t get too high and doesn’t get too low with wins or losses,” St. John said.

The Bulldogs will continue their 2018 campaign with a road trip to the University of Dayton on Aug. 30.