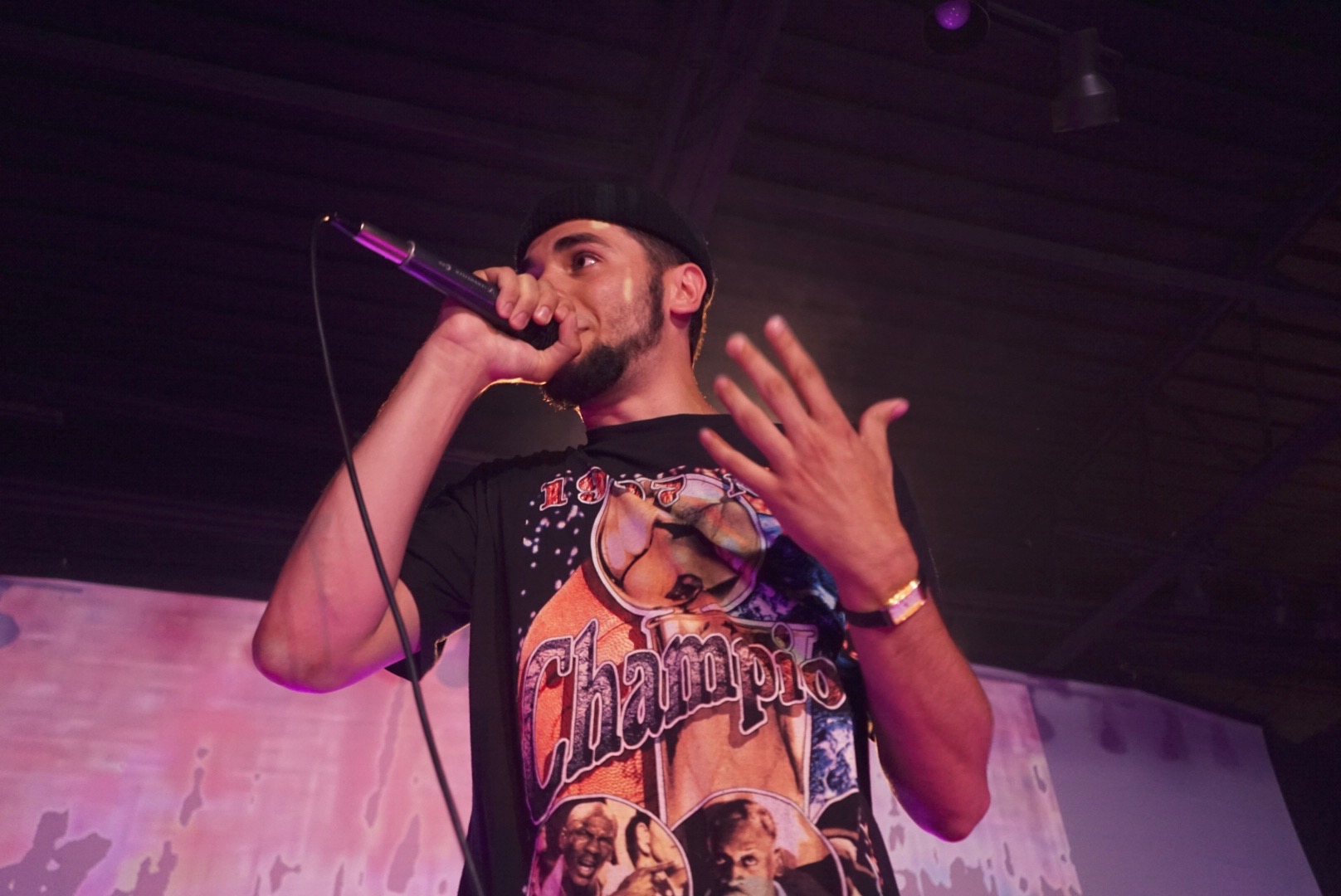 Aaron  Marshall, also known as Double A, performing at an event. He recently released his summer album. Photo courtesy of Aaron Marshall.

As the new school year begins, students reminisce on the special moments and memories that highlight their summer. Music can be a bookmark for those events. This past week was the music festival Chreece featuring rising talent from across Indianapolis’s Hip-Hop community. One of the performers included Butler alum Aaron Marshall who graduated this past spring and is making moves musically and in business, going by his stage name Double A.

“If you want to take yourself seriously as an artist, you’re going to have to invest in yourself and knowing that can make the difference on becoming successful in honestly, anything,” he said.

Marshall was born and raised in Indianapolis and attended Butler University as a recording industry studies major. He currently has two EP’s out including 2017’s “Delawhere” and his most recent summer album “Peaked” available on all major platforms.

“Chreece was great and exactly the type of atmosphere I wanted to perform my new music in front of,” Marshall said. “The project [“Peaked”] had had time to sink in from the beginning of the month until Chreece and by the festival some people even knew the words to the songs already! It made them that much more fun to premiere.”

Some of his most acclaimed songs and singles include Bliss from his “Delawhere” album, and Seconds and Used 2 from “Peaked.”

“The best thing I’ve heard is that people can hear the growth from my last project. Growth is good. You never want to move backwards or stay stagnant.” Marshall said. “It’s a culmination of all the things and experiences that had been culminating after its release. It was a personal project of growth and my confidence.”

Marshall talks about how being an up and coming artist in a smaller market can make it harder to become mainstream, especially with the lack of radio airtime and exposure. With odds stacked against local artists he said “you start to question yourself,” and yet he drew inspiration from his time hustling and performing to release his album.

“I’m confident in my work and I think it could compete with the people playing on the radio,” Marshall said. “But it doesn’t have the kind of response as the Kanyes and Lil Waynes. So, as a local artist trying to write new material, and you keep not getting the response you think you deserve, you begin thinking ‘Have I done my best work already? Have I peaked?’”

Despite the question mulling over during the creation of his latest project, the IndyStar nominated him for best local hip hop in Indianapolis.

Soon, he will be opening a store called Naptown Thrift with a location approximately fifteen minutes from Butler’s campus.

His store is both connected yet separate from his music career with products representing his personal brand and market aesthetic and many times operating as his own personal wardrobe. He believes in growing his music and business “organically.”

“I don’t self-promote on my store’s Instagram page, simply because I don’t want to be that guy,” he said with a chuckle. “if the people are flocking to one more than the other then I’m going to keep it that way, especially because one is an extension of the other.”

His store’s Instagram page has a higher following than his music page, but he doesn’t let that discourage him.

“I’ve collaborated with artists who thought I was the guy with the cool T-shirt and buy something from me and then walk out knowing me as Double A the guy making music,” Marshall said.

Indianapolis has a bustling community of local artists who are creating music regularly and performing across the city. Marshall invites and insists that listeners and music lovers support their local artists in Indianapolis and in their hometowns.

“Our scene will never progress if that doesn’t happen,” Marshall said. “But everyone wants to just support the next trend, but often you forget about your own community.”

He believes that artists are pursuing music and the recording industry to pursue their dreams, be successful, and then to give back to their communities.

“I see guys go to LA and try to make their mark in a bigger and affluent market and artist space, but I always say it’s important to bring that back eventually.” Marshall said. “I would encourage it to grow and learn in these big cities with all the events, and connections, and popular music, but the important thing is to bring that knowledge back to where you’re from.”

Marshall does not have any more upcoming shows scheduled, but fans can keep a look out for the opening of his new store location.

“With our age group we grew up listening to Kanye and Kid Cudi, and two here those two of them back in a spectrum of working with each other was refreshing.”

What was your “song of the summer?” What album did you have on repeat while relaxing on the beach or earning some summer income?

“Probably “No Brainer” because once again I’m basic and Justin Bieber is the love of my life,” Lebleu said. “However I think that my favorite album was between Drake’s album [Scorpion] and Travis Scott’s [Astroworld]. I literally had those on repeat.”

“I try not to listen to the song too much because I never want it to get old, but I literally can’t help it,” Forrest said.

Other songs that hit student playlists include The Carter’s “Apesh*t” released on Beyoncé and Jay Z’s summer album Everything is Love, and “God is a Woman” by Ariana Grande which was released on her newest album Sweetener and was recently performed at the MTV Video Music Awards.