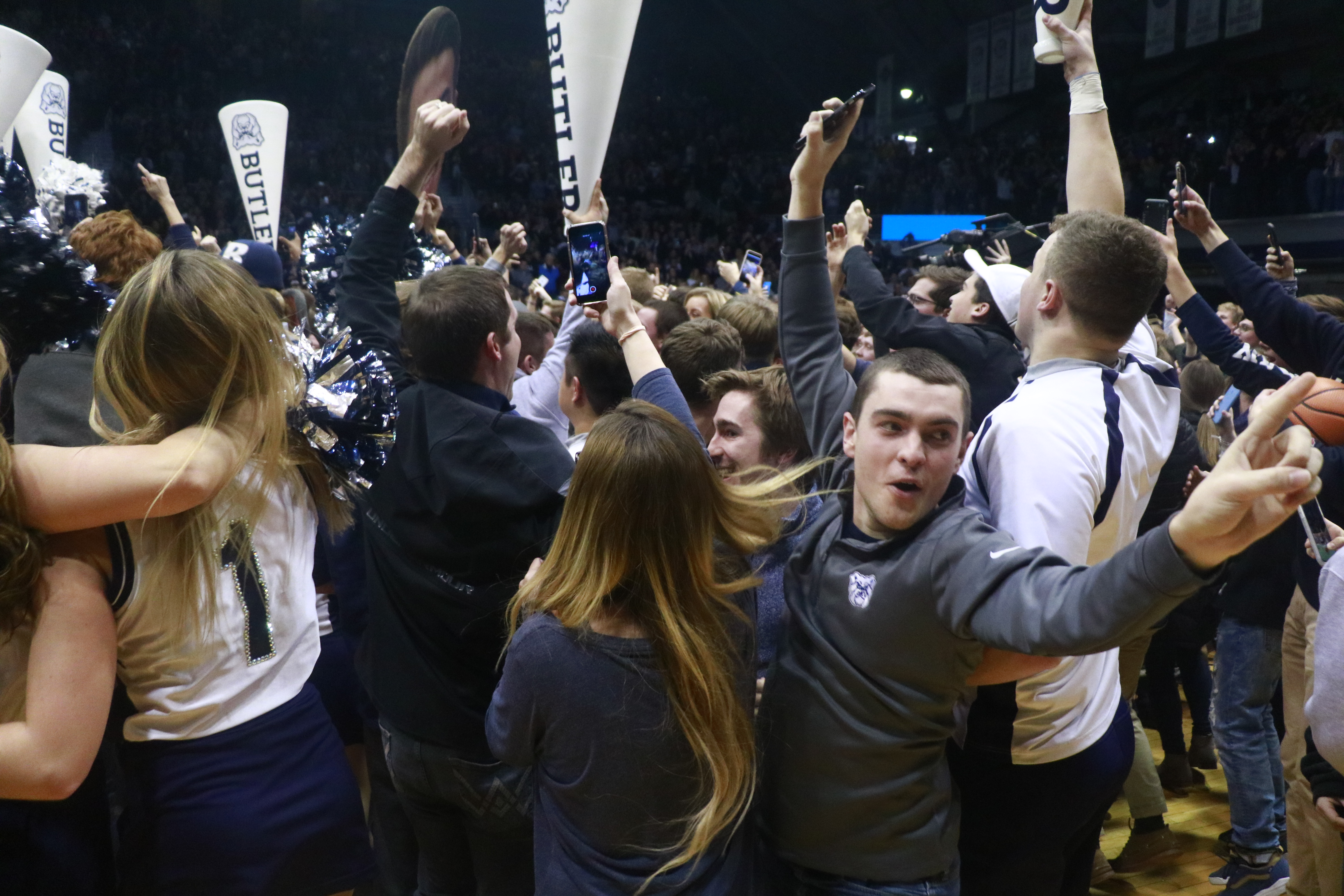 Butler fans storm the court after defeating No. 1 Villanova on Dec. 30. It was the Bulldogs’ third straight win over the Wildcats. Jimmy Lafakis/Collegian file photo.

Every year Butler athletics offers something new, and this year was no different. There were upsets, incredible streaks and big wins. The men’s basketball team welcomed new head coach LaVall Jordan back to campus, women’s soccer pulled off a nine-game shutout streak and the school’s football team won their home opener in the final three minutes of the game. Here are the top 10 Butler sports moments of the 2017-2018 school year.

It was a whirlwind of a summer for Butler men’s basketball. Chris Holtmann left Butler to take the head coach position at Ohio State University on June 9. Three days later, athletic director Barry Collier hired LaVall Jordan, who graduated from Butler as the program’s winningest player in 2001. Jordan went on to win 21 games, including the school’s first Big East Tournament game and an NCAA tournament game.

Spanning over a month, the women’s shutout streak wasn’t highlighted by one particular moment, but it’s still one of the most impressive accomplishments on a Butler athletic field this year. They outscored their opponents 21-0 in that stretch, including a 2-0 win over the No. 10-ranked Texas A&M.

After two games on the road to begin the season, the Bulldogs played Taylor University in their first home game. Butler was down 21-20 and had the ball on their own 43 yards with 3:19 left on the clock. Will Marty proceeded to drive the Bulldogs down the field and score on a 1-yard run to take the lead. This would have been a big moment any other Saturday, but being the first home game and adding 4,000 fans turned this into a highlight of the football season.

Sharon Clark has been at the helm of the volleyball program for 18 years. She has 12 winning seasons and seven 20-win seasons as head coach. On Oct. 7, she notched her 300th win as Butler’s head coach. At a school that appreciates Tony Hinkle’s decades-long tenure at Butler, Clark is right up there with the legendary coach.

The game broke attendance records at the Bowl as over 6,000 people came to watch these two top-25 teams play. After two overtimes, the final score was 0-0. It also marked the fifth-straight time the teams went into overtime.

With 3:39 left in regulation, the Bulldogs were down 56-44 to former coach Chris Holtmann and Ohio State in the PK80. Butler proceeded to go on a 15-3 run in the closing minutes to tie the game at 59 and force overtime. In overtime, they won on a Kelan Martin layup with just four seconds left. Butler went on to win seven of their next eight basketball games, including a win over No. 1 Villanova.

Butler played an almost perfect game against the Wildcats inside Hinkle to defeat the No. 1 team in the country, 101-93. After struggling to beat Georgetown days before, the Bulldogs shot 68 percent from behind the arc. Paul Jorgensen transformed into an emotional leader and Kelan Martin had 24 points and eight rebounds. For the third time in a row, the Bulldogs had beaten the Wildcats and the Dawg Pound was rushing the court again.

Two years ago, the Butler women’s basketball team won six games total. This year, they won six conference games, including a road win over Villanova, ranked No. 21 at the time. This was a landmark win for Butler, showing how far the team had come.

In the first round of the Big East Tournament, Kamar Baldwin had 32 points to lead Butler to their first conference tournament win in program history. Tyler Wideman tipped in a missed layup with four seconds left to give the Bulldogs the 75-74 victory over Seton Hall.