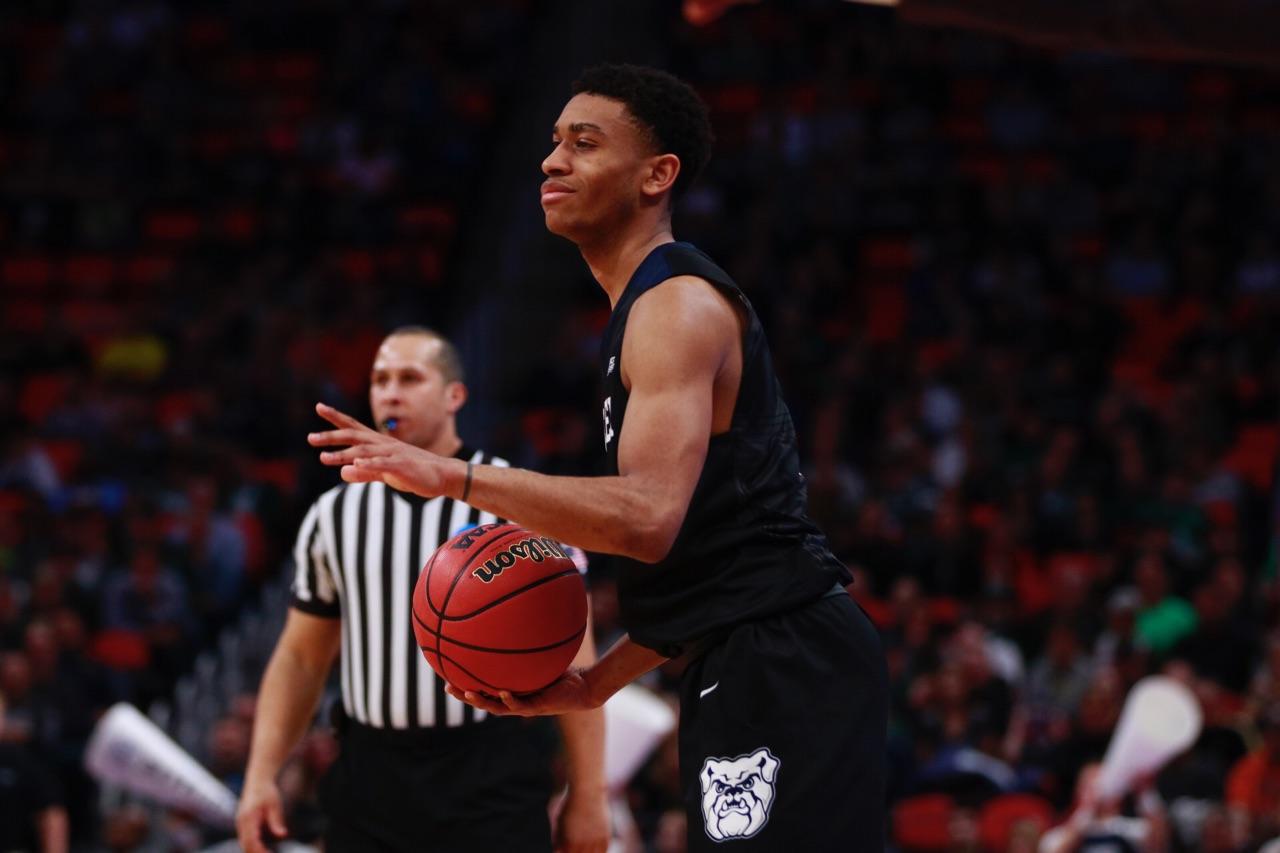 Aaron Thompson sets up the offense during Butler’s win over Arkansas. The Bulldogs face Purdue with a spot in the Sweet 16 on the line. Jimmy Lafakis/Collegian file photo.

How to Watch: CBS

After a 79-62 win over Arkansas in the Round of 64, the Butler men’s basketball team finds themselves in a matchup against the Purdue Boilermakers. The two teams met in the Crossroads Classic in mid-December where the Boilermakers took home a comfortable victory. But it’s March, anything can happen, and a key component is different from the first meeting. Here’s what to look out for as the Bulldogs try to even the score against Purdue when it matters most.

This is not a secret, but the first round game against Arkansas was a massive reminder of how important these two are to the success of this team. The numbers are staggering. Baldwin and Martin scored 51 points combined (Arkansas had 62 total) on 18-of-33 shooting, had 18 rebounds and six assists. It will be very hard for anyone in the country to beat Butler if these two are playing at this high of a level. Beyond the numbers, the rest of the Butler team can play much freer when Baldwin and Martin are efficient offensively. Sean McDermott gets a lot of open looks from beyond the arc and Paul Jorgensen benefits in a similar fashion. They might be the most valuable duo in college basketball and if the Bulldogs want to take down the Boilermakers, another top-tier performance will be needed from Butler’s best players.

The first matchup between these two teams was ugly. No ifs, ands or buts about it. In the first half, particularly, Butler didn’t look like they belonged on the same floor as Purdue. That simply can’t be in the Bulldogs’ heads coming into Sunday’s game. March is a whole different animal and anything can happen, just ask the No. 16 seeded UMBC who beat the No. 1 overall seed Virginia. The only way the Bulldogs are not competitive is if they let themselves down before game time. Learn from the mistakes in the first game, but don’t let those mistakes haunt you. Butler has more experience now, they are playing better basketball and they always show up in March. Not to mention one key change in tomorrow’s matchup…

…Isaac Haas has a broken elbow

Purdue senior Isaac Haas suffered a fractured right elbow in the latter stages of the Boilermakers’ first round win over Cal State Fullerton. Haas stands at seven feet, two inches and weighs in at 290 pounds. He has the best back-to-the-basket game in college basketball and might be one of the most unguardable players in the country. He is the definition of a matchup problem for the Bulldogs, who’s tallest starter stands at 6 feet 8 inches. Originally, the verdict on Haas was that his season was over, but recent reports suggest the giant might suit up the Boilermakers. Either way, the game is changed due to this injury. If he sits, Purdue loses a major part of their offense and if he plays, he is playing with one and half arms and probably won’t be quite as effective on either end of the floor. If nothing else, this changes the dynamic of the contest, which is always a good thing for the team that got handled the first time around.

Keys to the Game

The first key is winning the 3-point line again. Butler’s exceptional performance against Arkansas, forcing the Razorbacks into a 4-of-18 shooting night from beyond the arc, is only rewarded by another dangerous perimeter team. Vince Edwards, Carsen Edwards, and Dakota Mathias can all knock a lot of threes down in a hurry. With all of Purdue’s size, Butler can’t afford to lose the battle from deep.

The second key is stopping Carsen Edwards. Purdue features four seasoned seniors with years of experience but the sophomore guard is the most explosive player for Purdue. In three of Purdue’s six losses, Edwards has been held to less than 15 points. Stopping him is easier said than done, but his success is a big part of the Purdue offense. The Bulldogs can’t let him get into a rhythm or he could quickly put up 40 points on 19 shots like he did against Illinois earlier this season.