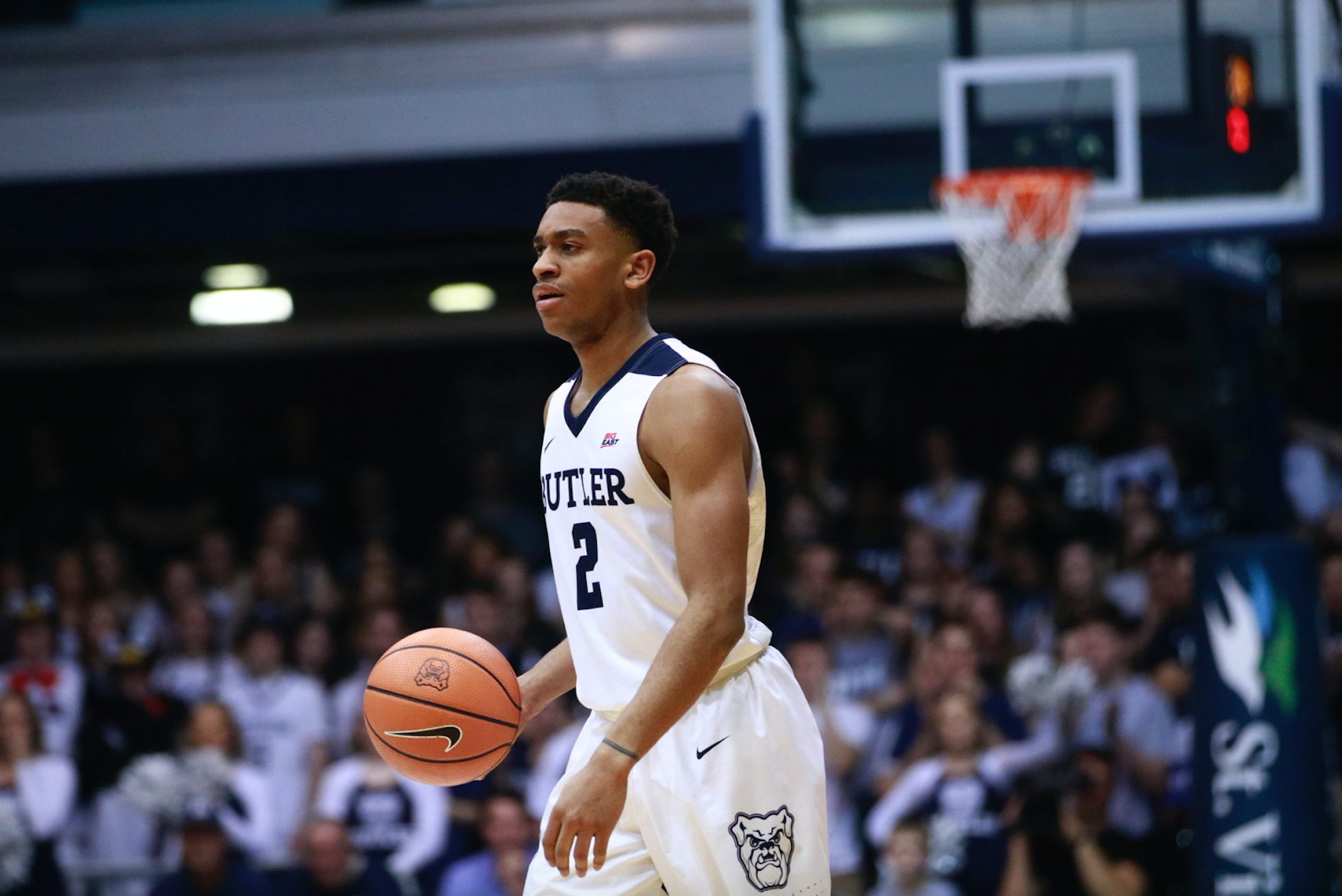 Aaron Thompson brings the ball up the court. Thompson makes his NCAA Tournament debut against the Razorbacks. Collegian file photo.

Who: Butler vs. Arkansas

How to Watch: truTV

It’s March. And March means that 68 men’s college basketball teams are dancing around the country, and the Butler men’s basketball team is one of them. The 10-seed Bulldogs are headed to Detroit to take on the seven-seed Arkansas Razorbacks. These two teams have only met once before and it was way back in January 1931. Butler beat Arkansas 37-21 in what was at the time known as Butler Fieldhouse.

Being from the SEC, Arkansas might not be a familiar team for most Butler fans, so here’s the rundown. The Razorbacks secured their seven seed by going 23-11 overall and 10-8 in conference play. They are in the top 40 in the country in points per game, scoring 81 points per contest. Their resume includes wins over Oklahoma, Tennessee and Auburn. Arkansas beat Florida in the SEC Tournament before losing to Tennessee in the semifinals. Here’s what to know as the Bulldogs look to win an NCAA Tournament game for the fourth straight year.

Battle of the Backcourts

Arkansas’ offense is fueled by the play of two senior guards: Jaylen Barford and Daryl Macon. Both players score more than 16 points per game and shoot better than 42 percent from the 3-point line. The offense goes when they go. In Arkansas’ better wins against Oklahoma, Tennessee, and Florida, the duo has at least 40 points. The best version of this Razorbacks team shows itself when Barford and Macon are scoring points in bunches.

Fortunately, Butler has one of the best defensive backcourts in the country. Guards Kamar Baldwin and Aaron Thompson have shut down some of the best scorers in the Big East. Against Marquette, the two forced Markus Howard and Andrew Rowsey, who both average 20 points per game, into an 8-of-21 shooting night. St. John’s guard Shamorie Ponds failed to score one field goal against Baldwin and Thompson in a 70-45 stomping of the Red Storm. Another lockdown defensive effort against the Razorback guards forces third and fourth options to make big contributions.

Arkansas ranks fourteenth in the country in team 3-point percentage at 40.1 percent. Obviously, controlling the 3-point line will be a key to Butler success. More importantly, it makes Butler’s margin for error much smaller. Butler’s performance against Villanova really was not bad. They shot a higher percentage, only missed two free throws, and only turned the ball over 12 times. But the big gap was on the 3-point line, where Villanova made seven more threes than Butler. The 3-point line can turn a solid team performance into a blowout very quickly. If Butler doesn’t do anything great against the Razorbacks, but wins the 3-point line, they will still find themselves in the game coming down the stretch. In March, just give yourself a chance and anything can happen.

Butler has struggled some breaking the press all season. It became a scouting point for getting back in the game against the Bulldogs. Villanova’s press early in conference play that cut an 18-point lead into a six-point lead comes to mind first. Arkansas forces 14 turnovers a game trying to speed up the opponent offensively. There are a couple ways to beat the press. First, if the Bulldogs play well defensively, Arkansas won’t be able to set up a press while the ball goes through the basket. Fewer buckets means less stress for the Butler offense. Second, beat it. Make Arkansas pay for putting multiple bodies away from the basket with quick passes and easy looks. If Butler can break the press with efficiency, the open looks will be there on the offensive end.