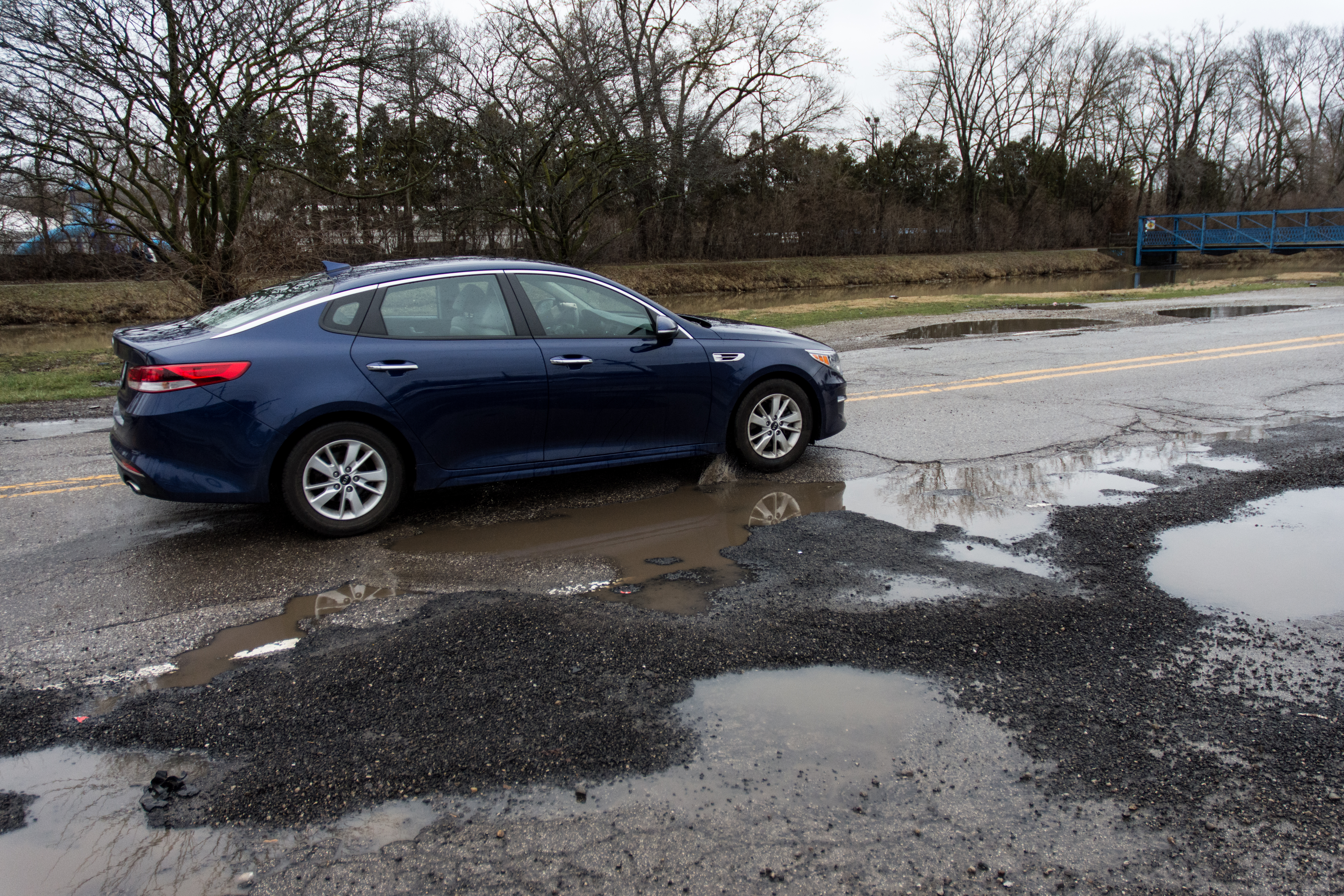 Potholes are scattered along Westfield Boulevard. Photo by Peter Larson.

Potholes around Butler University and the surrounding area are becoming dangerous and forcing commuter students to take alternative routes to school.

Nearly 14,000 potholes have been reported in Indianapolis so far this year, according to the IndyStar.

Another IndyStar report found it would cost at least $732 million for the city streets to be upgraded to fair condition from the current rating of poor.

Commuter students like first-year David Shammas, a healthcare and business major, believes the potholes are dangerous. Shammas popped his tire on a pothole while driving down Michigan Road.

“Basically the road is so bad that you can’t even drive to avoid them, it’s like one giant pothole,” Shammas said. “I was going like 35 miles per hour and hit some area and popped my tire. My dashboard lights up. I had a fully flat tire.”

Shammas believes the roads are dangerous because it is easy for people to get into a car crash.

“If people keep slowing down like that it causes traffic and people could get rear-ended,” Shammas said. “A lot of people try to swerve but the road is so narrow. The road is skinny enough it should be expanded, but the potholes make it such a pain to drive on.”

Due to the condition of the roads, Shammas said he would take detours to avoid the potholes.

Sophomore Malayna Pottschmidt, accounting and finance major, said she also has to sometimes take alternative routes to school because there is so much construction on the roads due to the potholes.

The potholes also slow down Pottschmidt’s commute to campus.

“46th Street is awful,” Pottschmidt said. “It is terrible, I have to drive on the other side of the road because the potholes are so deep and wide. It has definitely gotten worse from last year. Some holes are so deep that people are getting stuck.”

Pottschmidt said her brother’s car tire burst this past Saturday night due to hitting a pothole.

“I think they definitely can be dangerous, not only to the car,” Pottschmidt said. “Getting stuck or creating an accident is an issue. It’s dangerous also if you don’t know the area you’re in when that does happen. I think it’s just ridiculous how bad they are at this point.”

Clark Kirkman, president of the Butler Tarkington Neighborhood Association, said it is obvious and beyond dispute that there is a pothole situation city-wide and it is “not becoming of the city.”

“The city deserves better,” Kirkman said. “I understand why it is what it is, and there’s budget issues, but there needs to be some good out-of-the-box thinking to get our roads up to what we deserve.”

Kirkman said he reached out to the director of the Department of Public Works, trying to plan a pothole fix in certain trouble areas, although he has not heard back yet. Some specific pothole-heavy areas he mentioned were Illinois Street, north of 46th Street and 42nd Street.

Indianapolis is looking at a proposal to impose a commuter tax on neighboring counties to help remedy the situation. Kirkman said he is personally in favor of this tax.

The commuter tax would require people who work in Marion County to contribute a portion of their income taxes to Indianapolis.

“There’s a lot of people who live in other counties and they use our roads and rely on Marion County and don’t contribute when it comes to paying for the infrastructure,” Kirkman said.

Although Kirkman said he has been lucky enough to not have a tire blowout yet, he knows the potholes cause a lot of damage to people’s cars. He said he knows it is a safety issue and that he has had to swerve into another lane before to avoid potholes.

“I know it’s something that were all dealing with,” Kirkman said. “I’m out there putting on my Mario Kart driving skills trying to dodge all of the potholes.”

Butler student Shammas wishes to see change in the nearby future.

“I just want the city to actually fill the potholes,” Shammas said. “I never really noticed them until this year. My teacher from Colorado noticed the potholes, and right away knew why the taxes were so bad here, it’s because the roads are so bad.”

Commuter Pottschmidt said filling the potholes is the first step but she thinks Butler and the city could work together to help solve the problem.

“I’d like to have a Butler speaker at the city meetings,” Pottschmidt. “Not only that, but Butler should get preferential treatment because we bring in a lot of money for the city. We have to keep the ways to get to Butler accessible.”

She also said not only filling the potholes, but prevention of potholes is extremely important. She also wishes there was reimbursement for people that have had their car damaged by potholes.

Anyone can report a pothole by entering a service request on Request Indy. Or if there is a pothole on the highway or interstate, people can visit the Indiana Department of Transportation’s website to report it.