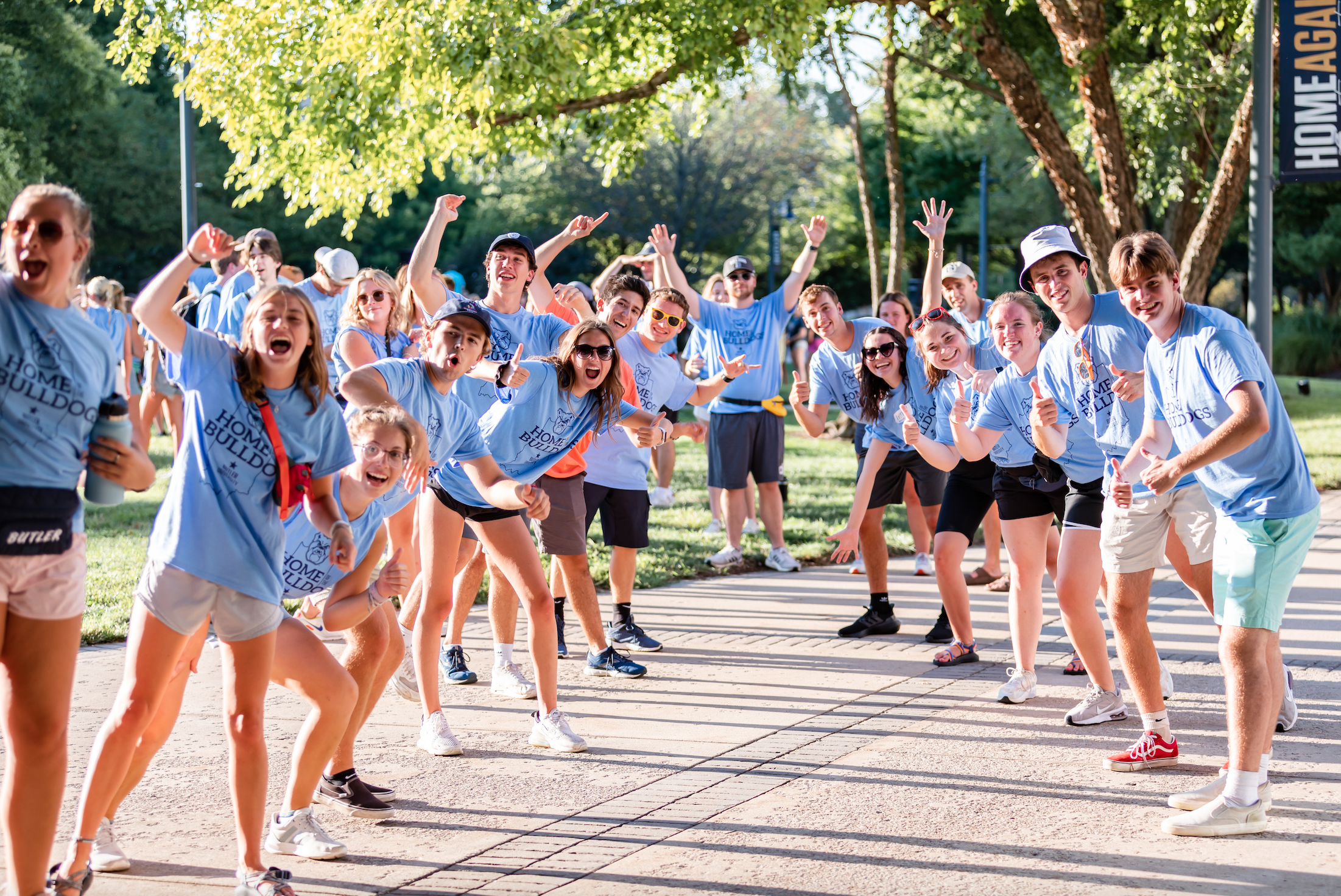 First-years make Butler University their home through the countless events presented by the orientation team. Photo by Lauren Hough.

Who let the dawgs in?

After the first four days of extensive fun-filled welcome week festivities, the class of 2026 was left exhausted yet energized for the new semester. During those four days, Butler first-years were given many opportunities to customize their orientation experience. Apart from the required programming, such as the convocation ceremony and guest speakers, new students curated their schedules by engaging in the packed Saturday, Aug. 20 through Tuesday, Aug. 23, 9 a.m. to 1 a.m. activities.

While many students waited in line to check in, several dawgs moved in early for various reasons. These students explored the campus, free to wander or get involved. One option was attending Butler Athletics events. The Butler volleyball team had their first game of the season on Aug. 20 against Bradley University. The women’s team lost 3-2 in a competitive five-set match. Later that evening, the Butler men’s soccer team had an exhibition game against Bradley.

New students, parents and returning students were able to catch a glimpse of Butler’s climate and culture on the hectic move-in day. Lanie Nicholson, a first-year biology major, shared her first-day experience.

“I was mainly focused on moving in [on my first day] and getting to know my roommates and suitemates,” Nicholson said. “[I am] excited to meet all the new people.”

Getting those freshman jitters out was no problem at Saturday’s First Night Frenzy. Students met other students while participating in yard games, playing competitive trivia, enjoying delicious local treats, taking train rides around the mall and competing in Minute-to-Win-It games.

“I started off the day getting breakfast at the dining hall … then went to the student orientation guide’s meeting,” Seigel said. “They told us some tips and tricks on how to navigate at Butler.”

Tuesday night’s Block Party had been the most anticipated event of orientation as it’s a way for new students, like Seigel, to get immediately involved in Butler’s 130+ clubs and organizations.

“I’m looking forward to seeing all the other clubs and to see what there is to do other than school … and sports.” Seigel said.

The Butler orientation team did not come to play when it came to the snacks and freebies provided each night. Pizza, breadsticks, cupcakes, cotton candy and popsicles were among the food line-up. Vinyl records, Squishmallows, a Keurig, board games and back-to-school supplies were available as prizes on Saturday night trivia. Design your own t-shirts, glow sticks and foam glow sticks were handed out at the Sunday night rave. Saturday’s resource fair and Tuesday’s Block Party showered first-years with Butler swag, from water bottles, T-shirts, drawstring backpacks, stickers, tattoos and everything in between.

After late nights of social fun, morning activities allowed students to refresh and recharge before another jam-packed day. Wake Up With Wellness, hosted on Monday and Tuesday mornings, provided students with ideas for self-care. From morning yoga on the mall to sleeping in to grabbing a coffee with a new friend, first-years were encouraged to relax before another exhausting day.

Aside from all the fun, first-years traveled around campus for various required meetings. Convocation formally invited the Class of ‘26 to the society of scholars. Families said tearful goodbyes to their students, leaving them to join the Butler family. Student orientation guides fully immersed freshmen into life on campus through games, lectures and interactive activities.  Academic Day allowed students to connect with their college and department plus get to know other students with similar majors. Although these events were mandatory, first-years found the opportunity to connect with the campus, the faculty and other students beneficial.

“I’ve gone to a few different events for orientation,” Resner said. “My favorite part so far has been [spending time with] my first-year seminar class … I’ve been hanging out with them all day.”

As orientation dwindled to a close, some first-years began their excitement for the new year. Like other students, Resner has eager anticipation for orientation to end and the real school year to begin.

“[I am looking forward] to be done [with orientation] because I do enjoy learning, but I feel like I need to do things on my own and make mistakes sometimes, but so far it’s been fun”, Resner said.

New student orientation 2022 proved to be a rollercoaster of emotions and activities, guiding first-years to act quickly on their feet and adjust rapidly to the dramatic life change of college. After this whirlwind experience, many students were eager to begin the semester. The class of 2026 has much to learn, but orientation provided a glimpse of opportunities Butler will provide for them.