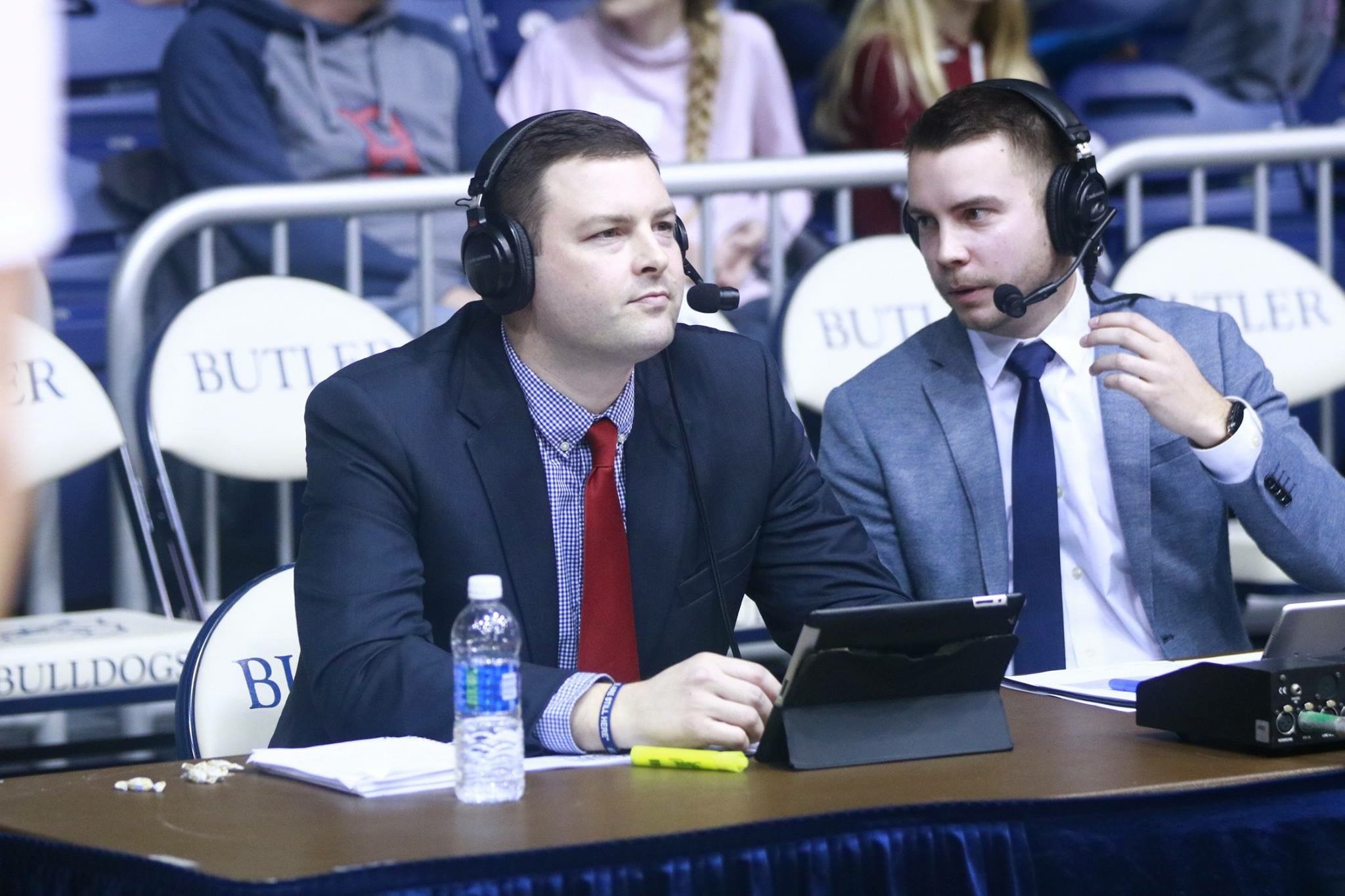 Nick Gardner (left) and Mark Minner (right) during a broadcast. The duo started working together in 2013. Photo courtesy of Jimmy Lafakis.

Nick Gardner and Mark Minner have guided fans through Butler basketball games since Minner joined Gardner in 2013. Gardner provides color while Minner covers the play-by-play portion of the broadcast.

Both Gardner and Minner attended Butler University as undergraduates. Gardner walked on to the Butler basketball team in the 2000-2001 season and earned a scholarship his senior season. Minner graduated from Butler in 2012. He spent four years working in the Butler athletics department calling women’s basketball, soccer and volleyball games. Minner also hosted “Bulldog Blitz,” a show ran by Butler students.

The Collegian sat down with this radio team to discuss their jobs as radio broadcasters, the Butler men’s basketball team, and what it is like being around the team everywhere they go.

The Butler Collegian: How do you prepare for a game as a color analyst (Nick) /as a play-by-play (Mark)? What is your process of gathering information to be ready for a broadcast?

Nick Gardner: Watching the league throughout the season and being familiar with the team.  Having that base of knowledge is important. First of all, you have to know the tricky names, get the pronunciations down. Mark [Minner] and I will make sure we are on the same page and getting that right. With the Big East being a true round robin, you’ve got a game against every opponent and you can use what you saw with your own eyes and understanding what they are trying to do. And obviously take some insight from the coaches. We are able to learn some things about what to look for. As well as knowing Butler and how they operate and just understanding how they want to play and how they want to attack. But I don’t like to get too much stuff because I want the game to dictate my commentary. I don’t want to have too many preconceived notions because the play dictates how we call the game.

Mark Minner: Some of the key elements include making sure you watch game film of the opponents that you will be playing. Watch so you can familiarize yourself with the players’ tendencies and get familiar with who they are. In addition, you are reading news articles and games notes. You are talking to sports information directors, coaches and players to make sure you know all the different storylines. Then you take all that information that you have gathered and create what is called a spotting board. Spotting boards become big cheat sheets for quick reference to key pieces of information. You want to get as much information as possible so that you can tell the best story possible.

TBC: How do you approach painting a picture for the audience since they can’t actually see the play happening in front of them?

Gardner: As the color analyst, I just want to stay out of Mark’s way because he does the heavy lifting in regards to describing the action. I want to be succinct and I want to get out of the way. You got to be very efficient with your words because they can’t see it and you can’t talk over action. My main thing is give something good quickly and get out the way because there is action coming the other way that Mark needs to describe.

Minner: The way I think about it is it’s a lot like storytelling. Going into reading a book or watching a movie, there are characters and plot themes that come into play and then the ball gets tipped and you just get to read along. My job is to paint that picture that folks who can’t experience it in person can feel as close to it as possible. Time and score is critical, people go in and out so often that setting the immediate scene is critical. Resetting the game is also helpful. If someone picks up the game in the second half they want to know what led them to this spot. I think it’s really fun that you get to find unique descriptors that help build a picture in somebody’s mind. You can’t just say somebody scored, you have to say how they got the ball and how they scored. On top of that, you have to set the scene what the emotions are like and what the atmosphere is like.

TBC: What is it like traveling with the team? What do you learn about the players and coaches that you don’t see on the floor?

Gardner: You get to know those guys as people, which is great. A guy who is the best player is not always the vocal leader in the locker room; all players have different dynamics. You get to find out some of those things that you don’t see if you are looking at stats or just showing up and calling the game. You get to really understand how guys operate and how they interact and their other immeasurables. That’s the kind of thing you see when you travel with them and you get to know them as people rather than just players. That adds to understanding what they bring to the court when they are out there.

Minner: It’s one of the unique parts of being affiliated with a team or school from a broadcast perspective. There is so much more that goes into a season than people see. By being around the team, you get to see the storylines develop throughout the season. There are things that you can use in a broadcast like what the team is trying to accomplish and what they are looking out for. It’s about getting to know who those players are beyond seeing them on the floor. We are able to tell their stories.

TBC: What has been the team’s success this season? When they are playing well, what are a couple things they are doing right?

Gardner: They are loud defensively, they communicate, they are talking through those situations. The best defensive teams are the ones that are loud out on the floor. They are being active and getting back on defense in transition and making teams work in the half court. Offensively, when that ball moves is when they are clicking and when they are able to work their offense from the inside out. When those things come together, that’s when you see good looks on the offensive end and you see more guys getting those shots. This team is at its best when there are guys like Sean and Paul are able to step out and make some plays.

Minner: This team cares a ton about representing Butler, winning and improving every day. Butler has had a trajectory of seeing the team improving every day, even through losses. The thing I can appreciate about this team is the way they are committed to improving and then you look at the fact that there are incredibly talented players on the team. It’s been an interesting journey to watch this team get to know each other as the season has progressed. The team is committed to getting the best outcome and it has been a really fun team to be around.

TBC: What has impressed you most about this team?

Gardner: Most teams improve throughout the year, but this team has improved exceptionally on both ends of the floor. Also, guys have understood their roles and have filled those in pretty quickly. Individually, a guy like Henry Baddley has been really impressive and the role he has stepped into offensively. Kelan Martin has been extremely impressive. Everybody knew he was good, but he has raised the bar and has put together just a remarkable senior year.

Minner: They were challenged in the middle of the Big East defensively, and they responded in a pretty big way. Despite all the transition, they have had a next man up mentality and they have always improved. They are not perfect and they aren’t where they want to be, but it takes a lot for a team to all be bought in and to all care so much about they way they are playing. The culture and personalities are awesome, but also the commitment they have to getting better every day.