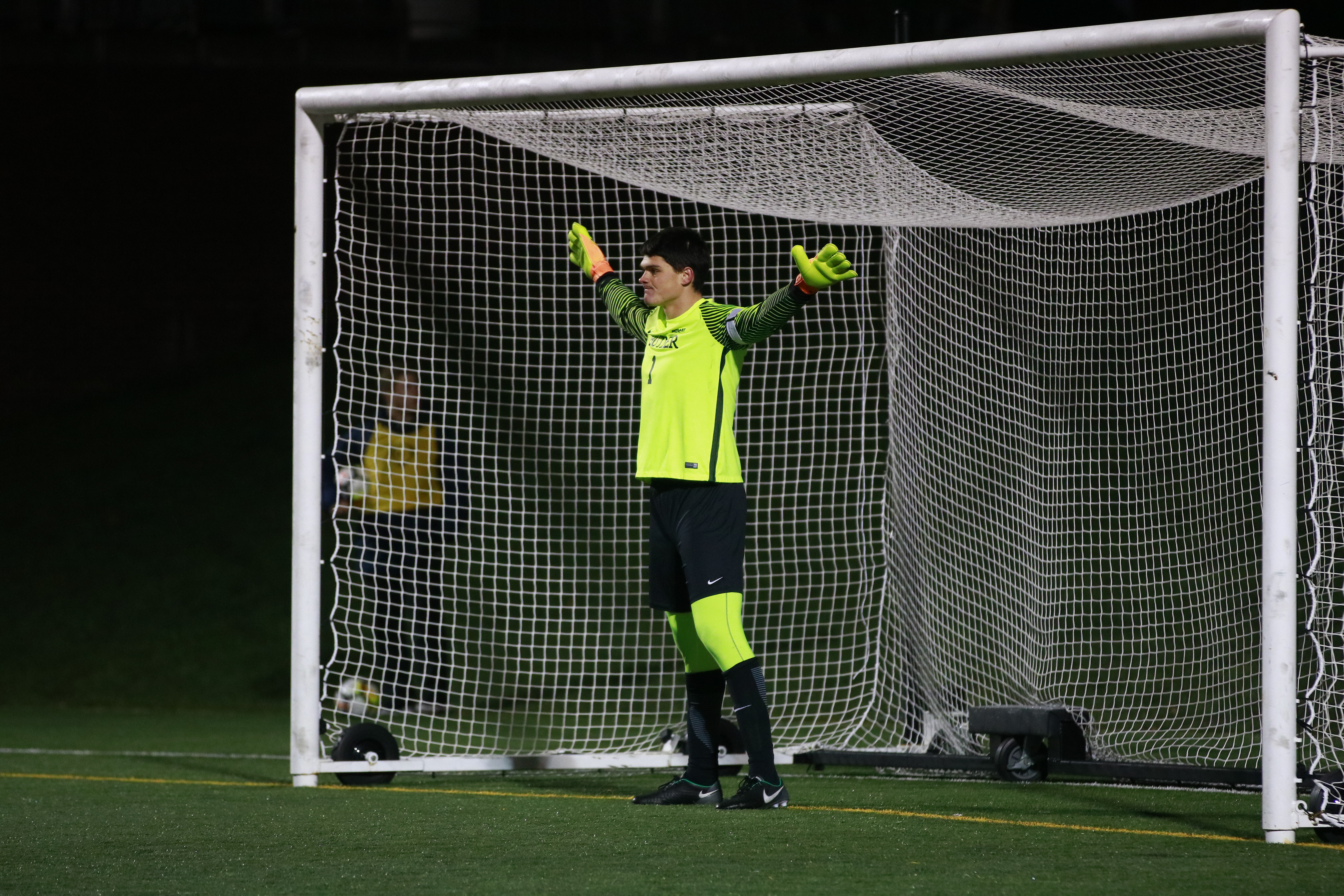 Eric Dick protects the net for the Bulldogs last season. Dick was the 13th overall pick of the MLS draft on Jan. 19. Collegian file photo.

It was supposed to be a day Eric Dick would remember for the rest of his life. On Jan. 19, the former Butler goalie was selected as the 13th pick in the 2018 Major League Soccer Superdraft by Sporting Kansas City.

He almost missed the whole thing. His flight to Baltimore was delayed. It took almost another two hours to drive to Philadelphia, where the draft took place.

By the time he finally got there, the draft was in progress and the room was full. Dick had to explain who he was to even get in.

Less than half an hour later, he walked across the stage and shook MLS commissioner Don Garber’s hand.

“Quite honestly, I blacked out a little bit, just in shock,” Dick, who was born near Kansas City, said. “I walked up there, I was all smiles, obviously. This is a dream come true and honestly unexpected. Very, very unexpected.”

Coming into the draft, Dick said he had no idea Sporting Kansas City was interested. They watched him play with Butler, as well as with the Oklahoma City Energy U-23 team in the Premier Development League over the summer.

“They do their research, I guess,” Dick said. “I think that’s why they really played it close to their chest and really didn’t interview me because I guess they saw enough through that.”

After redshirting the 2013 season, he played in 71 of a possible 77 games for the Bulldogs, conceding only 68 goals. The Bulldogs made NCAA tournament appearances in 2016 and 2017 with Dick in net.

In his final season at Butler, Dick was named a team captain, and helped lead the Bulldogs to their first Big East regular season championship and advance to the Sweet 16 of the NCAA tournament. He was named a United Soccer Coaches first team All-American and Big East Goalkeeper of the Year.

“I haven’t met a better shot stopper, better leader, better man who has been so passionate about the game of soccer,” Eric Leonard, who played all four seasons at Butler with Dick, said.

Prior to the draft, Dick participated in the MLS combine from Jan. 11 through Jan. 17. The combine consists of interviews, physical testing and full-field scrimmages so MLS teams can better evaluate players.

He is the first Bulldog picked in the opening round of the MLS draft since Zach Steinberger in 2015, who currently plays for Jacksonville Armada of the North American Soccer League.

Since entering the MLS in 1996, the Kansas City franchise has won two MLS Cups and four U.S. Open Cups.

Of those six championships, four came under current head coach Peter Vermes, who took over the team in 2009. Sporting Kansas City has qualified for the MLS playoffs seven consecutive seasons.

Dick and the rest of Sporting Kansas City start their 2018 campaign at home against New York City Football Club on March 4.

“They are getting one of the most unique personalities I’ve ever met and just a freak of a goalie,” Jared Timmer, Dick’s teammate at Butler, said. “That’s what Sporting Kansas City is getting.”