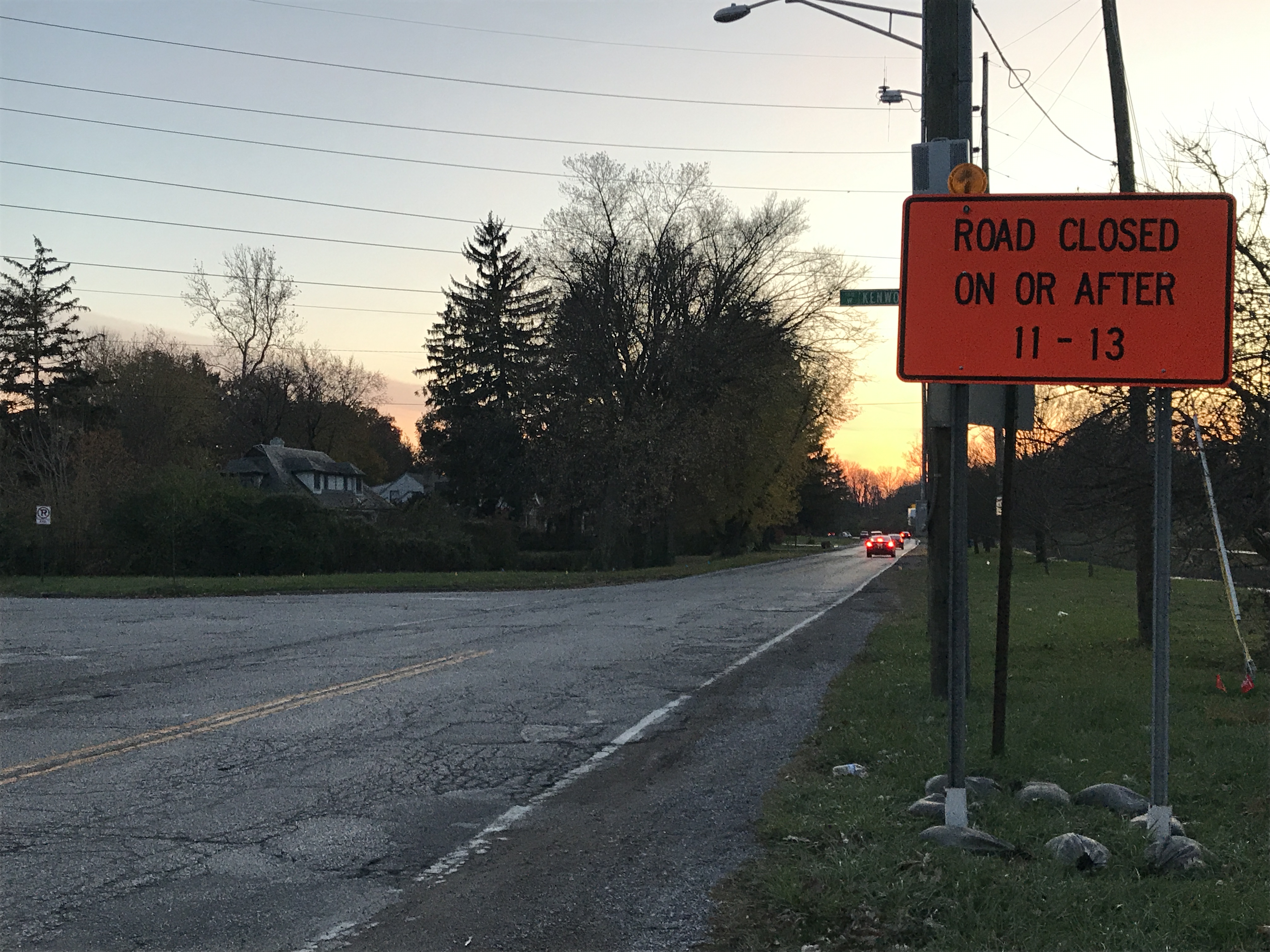 Westfield Boulevard is a common route from campus to Broad Ripple. Photo by Zach Horrall.

A section of Westfield Boulevard is now closed off due to construction from the Indianapolis North Flood Damage Reduction Project.

The estimated construction end date is Dec. 22, but may be extended due to a delayed start date. The original start date was Nov. 13.

The section of the road from 54th to 56th Street will be shut down to accommodate the utility relocation work.

The INFDRP consists of a wall that will protect 1,200 homes in Broad Ripple to Butler-Tarkington, decreasing the flood insurance costs of residents while simultaneously increasing the value of their property, according to the Indianapolis Department of Public Works.

Ben Easley, a spokesperson for Indianapolis Department of Public Works, said the construction will be completed by Indianapolis Power and Light.

The electricity company will relocate the power wires along Westfield Boulevard as part of Phase 3B-3 of the INFDRP.

Westfield Boulevard is a frequently used route to go to Broad Ripple, a local neighborhood with a variety of shops, restaurants and bars.

Michael Kaltenmark, director of external relations at Butler, spoke about the closing of Westfield.

“It’s a pain in the neck,” Kaltenmark said. “That’s a major artery for us.”

He pointed out that the closing will be detrimental for traffic toward Butler, especially with the frequent basketball games and Clowes Hall performances during this time.

He said it normally takes him exactly seven to nine minutes to drive from where he lives at Sigma Nu to the Bagel Deli, depending on how many stop lights he hits on Westfield.

Cardenas often works mornings and the closing of Westfield is going to affect his wake-up time and commute to work.

“Now I don’t get to sleep in much on Saturday mornings and that’s gonna suck,” Cardenas said.

He expects the closing will take him 15 minutes or more to get to work.

The INFDRP will also eventually affect Butler University, specifically by the canal and Holcomb Gardens area, the Collegian reported on March 28.

It was eventually decided, though, that the project continue. The city and Butler formed an agreement that will allow Holcomb Gardens to go under construction for the INFDRP.

Kaltenmark said Butler was opposed to the trajectory of the current flood project, but still fundamentally in favor of adequate flood protections for Butler’s neighbor, Rocky Ripple.

“The nice thing is, when you get to the other side, hopefully we’re going to have adequate flood protection,” Kaltenmark said.

The U.S. Army Corps of Engineers and its contractors will complete the INFDRP. The excavation work done by IPL over the next months will prepare the Phase 3B-3 site for the construction work.

Westfield’s path will be rerouted to a few different streets in the Butler-Tarkington area. The streets include 46th, 49th, Illinois and Meridian Streets as well as Washington Boulevard.