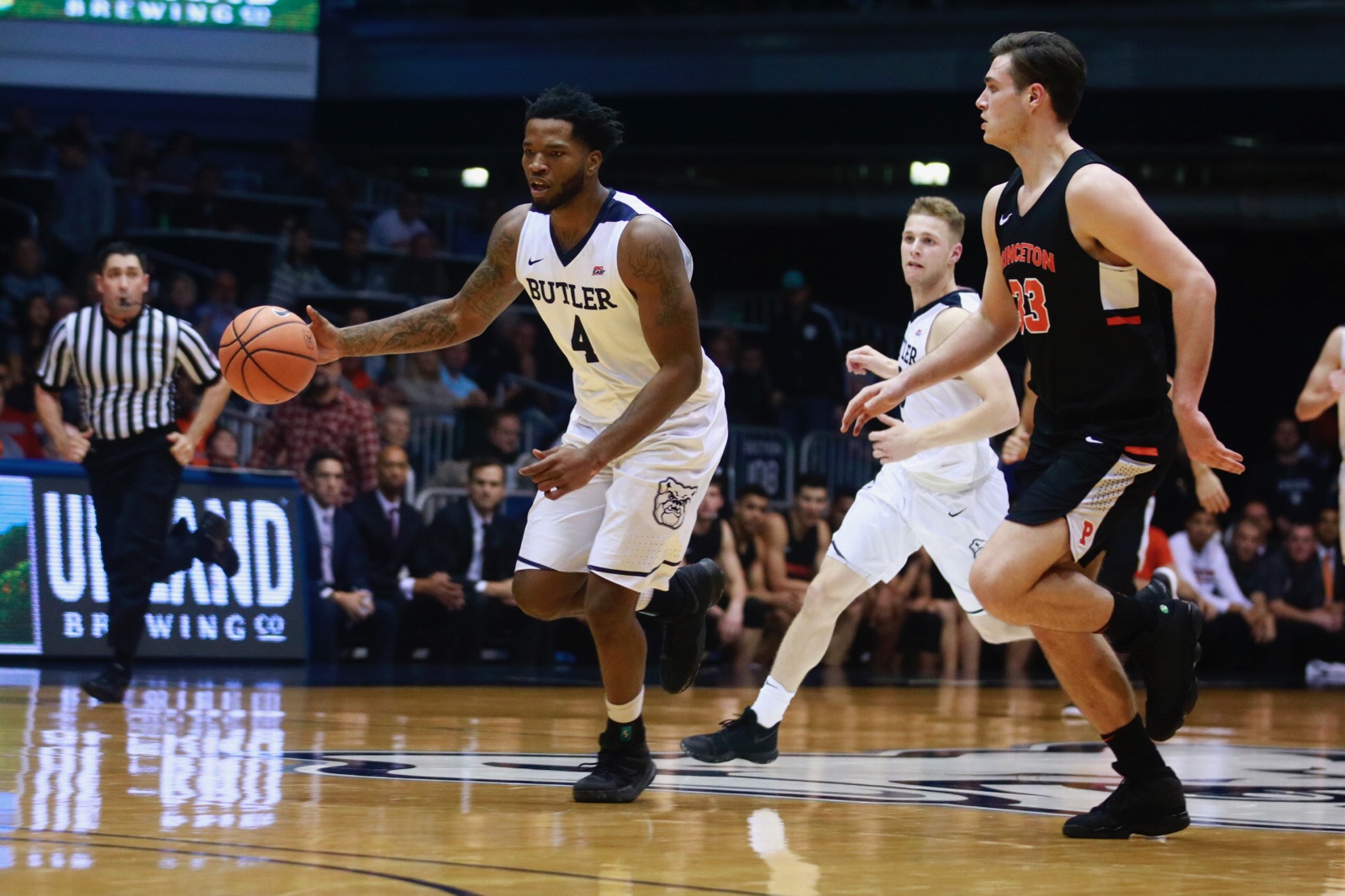 Senior Tyler Wideman works his way past a Princeton defender in a game on Nov. 12. The Bulldogs will take part in the Phil Knight Invitational in Portland, Oregon, where they will play three games in four days. Jimmy Lafakis/Collegian file photo.

Who: Butler vs. Texas

After a convincing win against Furman, the Butler men’s basketball team heads to Portland, Oregon, to play the University of Texas Longhorns in the first round of the PK80 Invitational.

The tournament is in honor of Phil Knight, co-founder and former CEO of Nike, who is turning 80 years old in February. The tournament features 16 Nike-sponsored schools from across the country including reigning national champion North Carolina and the current No. 1 team in the country Duke.

The teams are split into two, 8-team brackets. Butler is part of the motion bracket along with Duke, Gonzaga and Ohio State. Here’s what to watch for as the Bulldogs try tackle Texas.

Butler had one of their most effective offensive games of the season against Furman. They shot 57 percent from the field and 44 percent from beyond the arch. There are two main reasons for Butler’s success against the Paladins. The scoring and the contribution came from all corners of the floor. The Bulldogs had four players in double figures, and one of them was not Kelan Martin. Balanced scoring will force Texas to guard every position and take pressure off of Butler’s main scorers, like Martin.

The second reason is ball movement. The offense was static for most of Butler’s first three games, dishing out 10 assists or less as a team twice in that time span. It was a different story against Furman as the Dawgs had 19 assists with five different players dishing out three or more. Isolation drives to the rim late in the shot clock probably won’t work with the trees that Texas has in the paint.

Speaking of those trees, Mo Bamba is one of the best big men in the country. According to ESPN, he was the fourth best high school player in the class of 2017. The 6’11 freshman has an incredible wingspan and is a rim protector defensively, but he can also step away from the basket and knock down shots from the perimeter.

The effort on Bamba will have to be a collective one. Forcing him to step away from the basket defensively will give Butler guards a chance to get to the basket, and making him work for every shot defensively will be big. Tyler Wideman will get the bulk of the responsibilities against Bamba, and if Butler is going to win this game, slowing this talented big man down will be a big key to their success.

Texas is deep. In their last game against Lipscomb, 11 different Longhorns saw more than 10 minutes of playing time, and eight saw 16 minutes or more. They will have fresh bodies on the floor almost the entire game.

In Butler’s only loss of the season against Maryland, the bench was nonexistent; scoring only 13 points on 3-9 shooting. If Texas is going to be cycling players in and out, head coach LaVall Jordan has to be able to go to bench and have them be effective weapons on both sides of the floor.