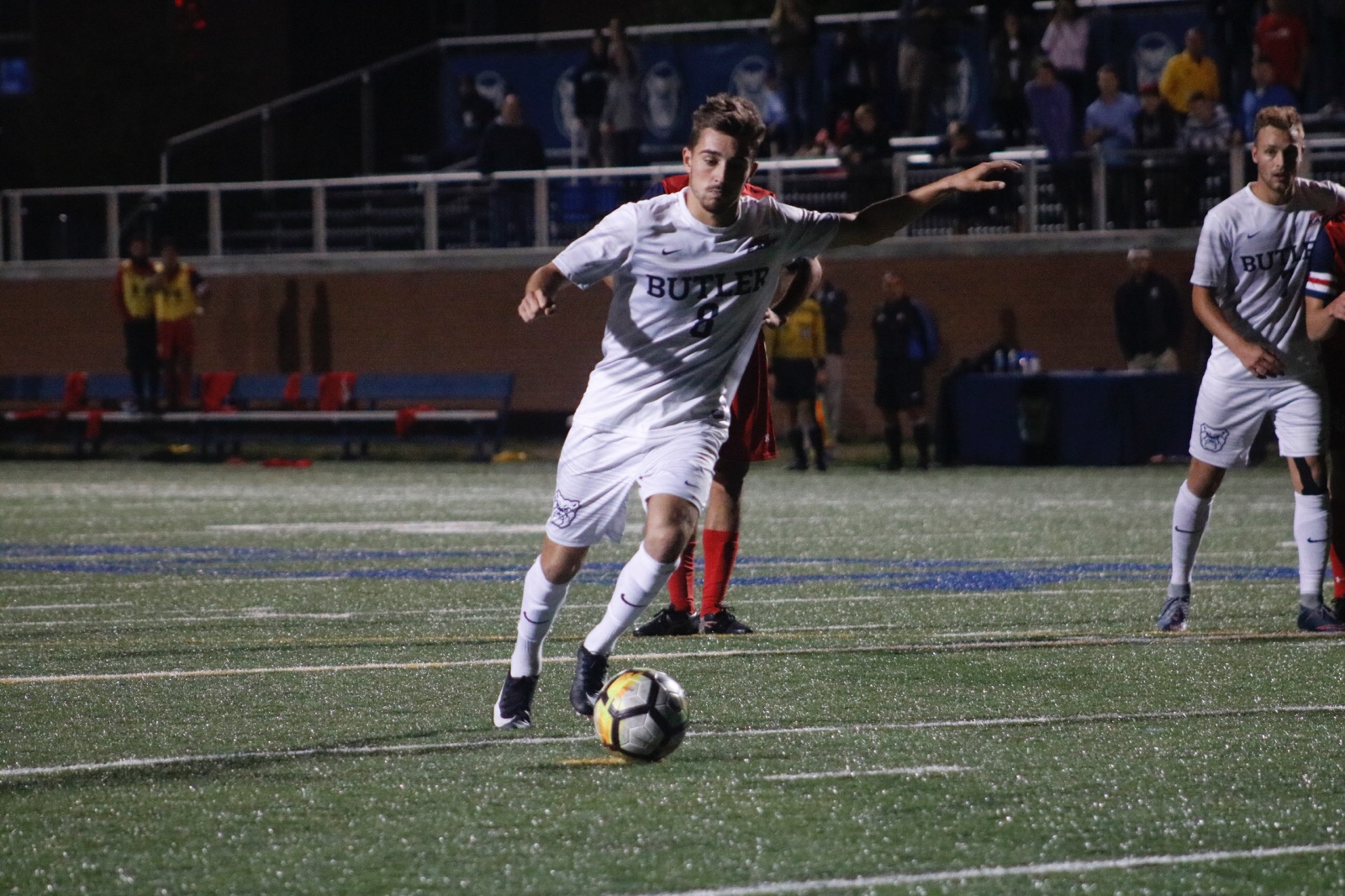 The text message announcing a mandatory meeting the next day came from redshirt senior goalie Eric Dick. The No. 15 Butler’s men’s soccer team was riding the bus back from their game at Southern Illinois University-Edwardsville on Oct. 10.

Dick did some research to prepare for the meeting. He found underdog teams from a variety of sports that redefined themselves at one point or another in their season.

To finish his list of examples, Dick turned to the one sport everyone in that meeting could relate to: soccer. He talked about Leicester City of the English Premier League, who stunned the soccer world two seasons ago by becoming champions of England’s top division.

Since meeting in the locker room, Butler has not lost, going 4-0-1. The draw came against No. 1 Indiana University at home on Oct. 18. All four wins were over Big East foes.

Now, just like Leicester City, the Bulldogs are champions. They clinched the outright Big East regular season championship with their 2-1 win over Marquette University on Oct. 28.

It is the first regular season championship for Butler in any sport since joining the Big East in 2013.

“I’m an Englishman — a European — and the tournament, even sometimes the tournament’s still kind of new to us,” head coach Paul Snape said. “It’s wonderful to win the tournament, but I’ve always said the regular season is kind of the best team wins it because it’s over nine games. I was absolutely thrilled.”

Entering this year, Butler was picked to finish third in the Big East preseason coaches’ poll. This was after the Bulldogs finished second in the 2016 regular season and won the program’s first-ever conference tournament.

Butler then lost starting midfielders Marco Charalambous and Jared Timmer to season-ending injuries before conference play started. The duo made a combined 72 starts between them in the 2015 and 2016 seasons.

Charalambous didn’t play at all in 2017 and Timmer, a preseason All-Big East selection, broke his tibia in the team’s second game.

“When we lost [Timmer and Charalambous], I think that we focused on the theme that you know what, we need someone to fill their roles,” Leonard said. “Someone needs to step into their shoes and that is exactly what happened.”

The other unknown heading into Big East play for the team was goal scoring. The graduation of 2016 Co-Big East Offensive Player of the Year David Goldsmith, their main attacking option for the past four seasons, left a void.

Sophomore forward Brandon Guhl was tasked with replacing Goldsmith’s offensive production. Guhl made eight appearances for Southern Methodist University in 2016 before transferring to Butler for his sophomore season.

“The simple message that I always told him is like, ‘Don’t be David Goldsmith, be Brandon Guhl,’” Dick said. “You’re replacing a great player. I mean, that happens in all sports. But what you’re not is, you’re not David Goldsmith.”

Creighton University visited the Bulldogs in the first Big East match for both teams on Sept. 16. The Bluejays scored in the fifth minute and again in the 65th minute to take a 2-0 lead.

Guhl responded with two goals in the final 15 minutes to send the game into overtime. Sophomore defender Alex Lehtinen’s header off of a corner kick in overtime completed the comeback for the Bulldogs.

“To show the grit and the desire with 20 minutes left to score two and then put that third away to win that, that to me said that we could do some great things this year,” Dick said. “It just reassured me and I think it reassured the entire team.”

Ten of the team’s 22 goals this season have come courtesy of Guhl, tied for the most in the Big East. He leads the team with 17 shots on goal and has three game-winning goals to his name.

“The great thing about [Guhl] is that he’s got a mentality. He just wants to keep learning and learning and improving,” Snape said. “I don’t think we’re gonna see the best of him until either next year or the year after.”

Eleven different Bulldogs have registered at least one point this season. Guhl tops the team with 23, followed by 17 from sophomore midfielder Lewis Suddick.

“We don’t have 11 guys on this team,” Leonard said. “You look at all the stats for our team, everyone’s scoring goals for us, everyone’s having assists, everyone’s making impacts.”

Butler enters the Big East tournament as the No. 1 seed and hosts a semifinal game at the Sellick Bowl on Wednesday, Nov. 8.

Despite a rash of injuries, unknowns and early setbacks, the Bulldogs didn’t quit, either.