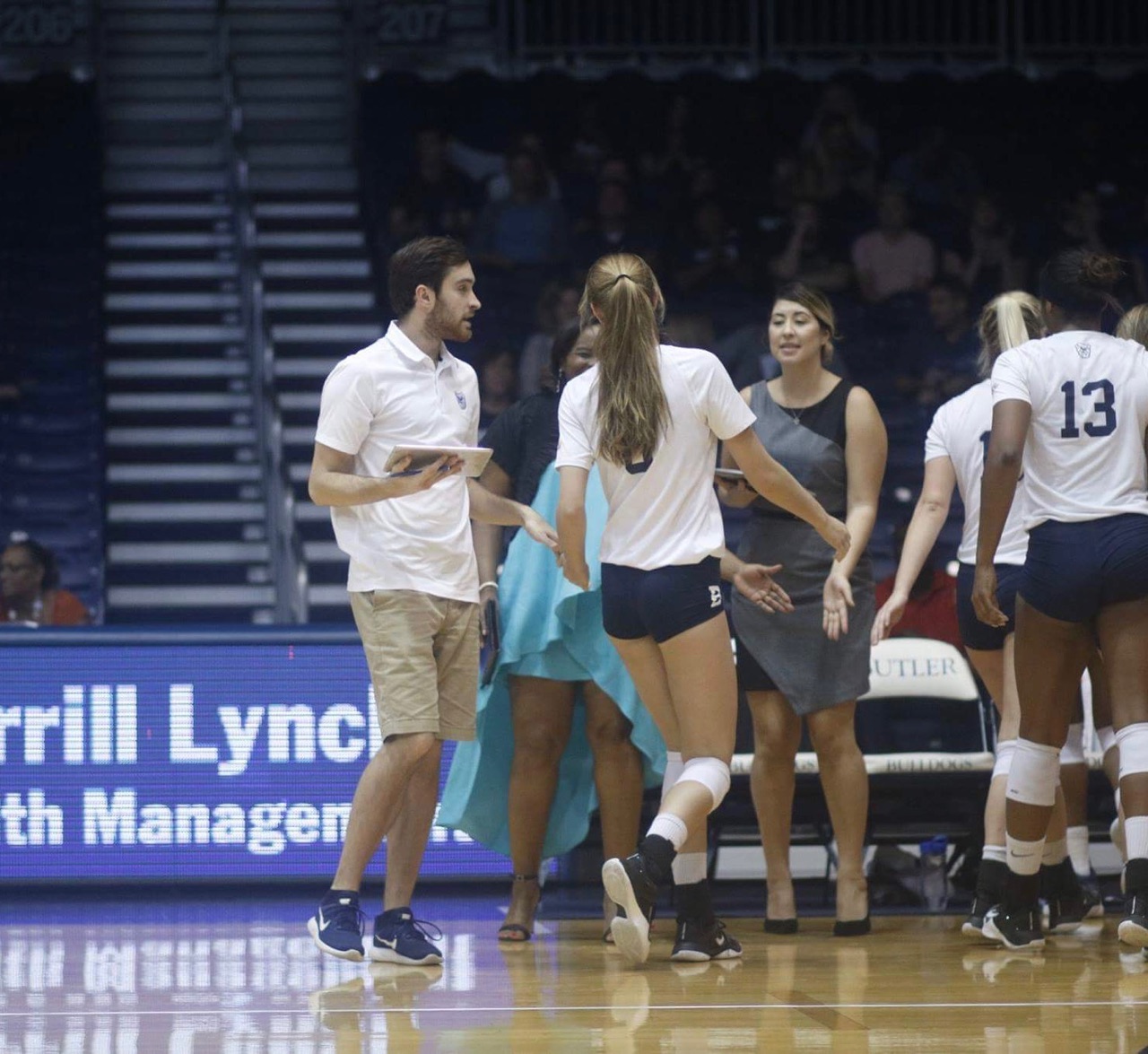 Assistant coach Sean Keeve talks with the players during the timeout. Photo by Jimmy Lafakis.

Pennington came from the University of Illinois-Springfield, where he primarily assisted with defense and serve and receive for two years.

Keeve, a Butler volunteer assistant coach, spent the last two years assisting at Saint Joseph’s College in Rensselaer, Indiana, before the school was suspended due to financial challenges. Both Division II schools competed in the Great Lakes Valley Conference as foes.

“Coming to something that’s much better than where we were before has been great for us to bond together and work to be at this next level,” Pennington said.

After one glance at the Bulldogs’ season stat sheet, one particular statistic pops off the page.

Butler holds a 227-106 total blocking advantage over its opponents and averages nearly three blocks per set. The new coaches have made that skill a point of emphasis.

“I would say the coolest part is the school pride here, which has been awesome so far,” Pennington said. “It’s amazing to be in this awesome fieldhouse. You can feel the atmosphere around you of that pride for your school.”

Clark said the new coaches bring balance to the staff and team.

“Sean brings great technical experience to our staff,” Clark said. “He’s a great on-court coach and very good with statistical analysis, which we were missing last season. He takes the data on the opponent’s tendencies and defensive schemes to make in-match adjustments. Eddie has been great with positive energy and uplifting voice for the players.”

The Bulldogs have jumped out to a 15-6 start (5-4 Big East) this season. Keeve was hired after reaching out to head coach Sharon Clark for the position. He said he and Pennington do whatever is asked of them.

“We go wherever we are needed most,” Keeve said. “We emphasize what Coach Clark puts into practice, and we’re constantly on the girls to to be the best they can.”

Junior setter Maddie Freiwald has a distinct connection to one of her new assistant coaches. Pennington once served as an assistant coach for the Colorado Volleyball Association club team, which Freiwald played for when she was 15 years old.

“They are not afraid to laugh and have a good time,” Freiwald said. “It is very entertaining to watch them play ‘Horse’ and try to dunk before games. They are really good at lightening the mood without even trying.”

Those “Horse” games are fiercely competitive. The all-time series is currently knotted at 1-1. Pennington said he comes into each game with a plan.

“I just want to try and shoot threes,” Pennington said. “Occasionally, I will try to dunk because I know Sean struggles to dunk.”

Junior defensive specialist Rachel Schultz transferred to Butler from Lake Land College this year and adjusted to Butler alongside the coaches.

“With Eddie, I know that I can go to him about anything and he will always give me great life advice,” Shultz said. “With Sean, I can get the direct feedback I need to hear from him. Sean works with me in individuals, so I think I have bonded with him a lot through that and him challenging me to do new things that I am not always comfortable with.”

Schultz said she has bonded with the coaches differently.

Pennington has offered her those valuable words of positive encouragement, while Keeve focuses on tactical skills. During individual workouts, he works with Schultz to use her hands instead of her platform.

“Even when I would get frustrated, he would make me work through it and try to fix it,” Schultz said. “He didn’t let me stop.”

Before the match against St. John’s University on Oct. 6, Pennington juggled a volleyball with his foot. A former hockey player, Pennington said his juggling is slowly improving.

“I wish I played soccer growing up,” Pennington said. “Not like long-term soccer, just enough to have experienced it. I’m getting better. It’s not perfect. I just like kicking stuff.”

Or as Keeve put it, “that’s just Eddie being Eddie.”

“Eddie is always keeping things light,” Keeve said. “There’s never a dull moment. We like to keep things loose, relax and just do our jobs.”

Keeve described Pennington as the source of comic relief when the team needs it the most. Clark said she enjoys the coaches’ sense of humor.

“They are both hilarious and laugh at all my jokes, which is important stuff for a head coach,” Clark said.

The pair met in June during Butler volleyball camps and room together on road trips. Even though they have known each other for just a few short months, Keeve said they have already hit it off.

“We’re always busting each other’s chops,” Keeve said. “Some stuff that is said in the office stays in the office … no, no, we love each other. Eddie has helped me countless times with parts of scout that I need advice with, as well as lending a hand to normal tasks throughout the day in the office and on the court. I like to think that I’m there for him in the same capacity.”

Keeve said that the pair bond during every possible occasion.

“We’re just guys, you know?” Keeve said. “In the end, we’ll crack any random jokes about each other from work that we’re doing, to making fun of each other on the court when we’re playing in practice if we screw up to just about anything. We don’t take things personally, so it makes for a fun atmosphere.”

That St. John’s win on Oct. 6 became a memorable night for both Keeve and the team. After the Bulldogs beat the Red Storm in four sets, the team belted out a chorus of “Happy birthday, Seandra” to celebrate Keeve’s 25th birthday. “Seandra” was a new nickname the players gave to their coach, and they subsequently mobbed him at half court.

“I wasn’t expecting that,” Keeve said. “I was actually hoping it didn’t happen. I get embarrassed pretty easily, but I appreciate the team for doing it. For my 25th birthday, all I wanted was a win and I got it.”