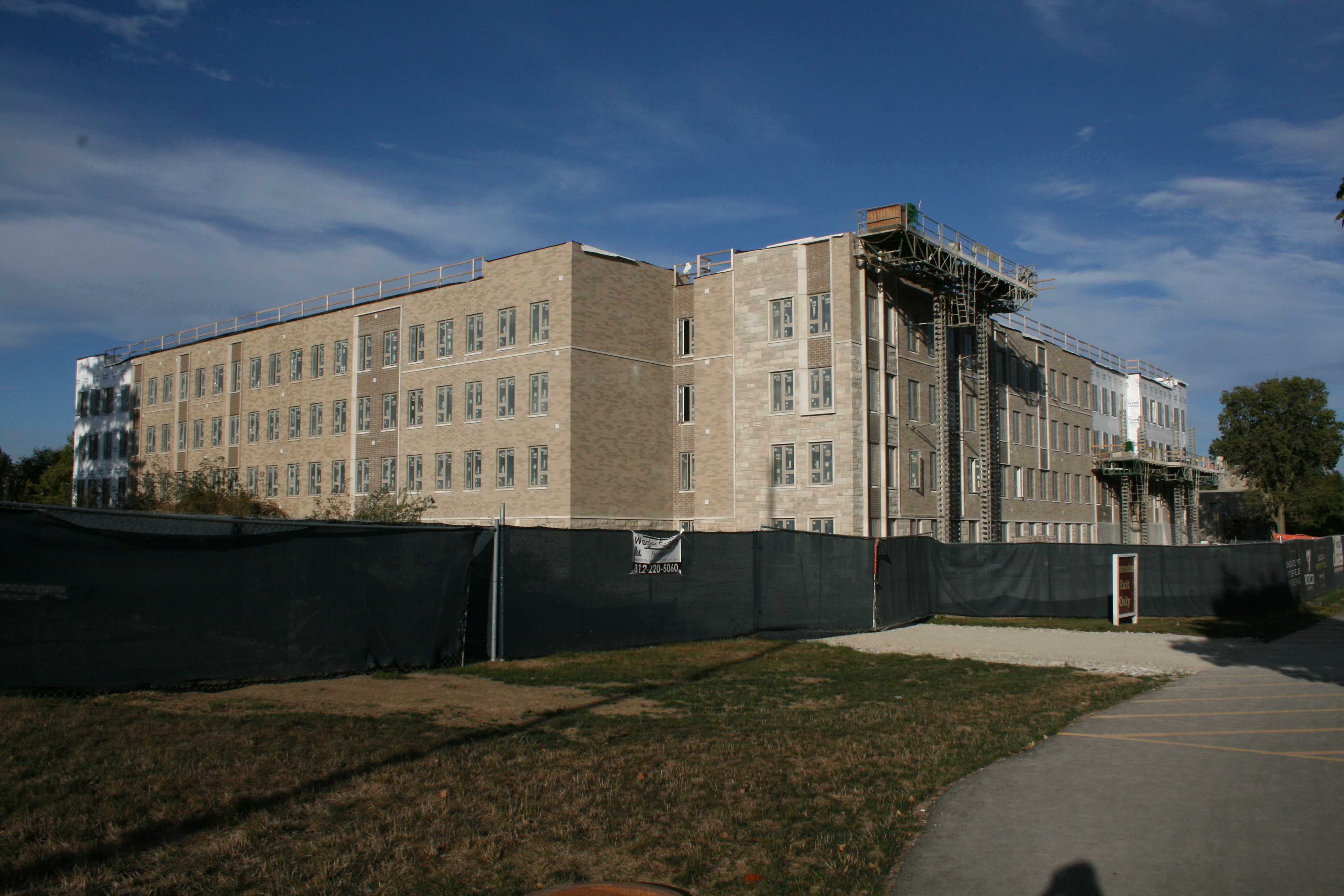 Irvington House is currently under construction and sits on Hampton Drive. It is set to open for the fall 2018 semester. Photo by Zach Bellavia.

The university announced Sept. 29 the name of the new residence hall. Irvington House will take the place of Schwitzer Hall, which was torn down last winter.

Butler was originally located at 13th Street and College Avenue. After 20 years, the board of directors sold that land and relocated the campus to Irvington where Butler stayed for 53 years. Butler then moved to its current location in Fairview.

Anne Flaherty, dean of student life, said in an email interview that Schwitzer Hall was named after Louis Schwitzer, who was an engineer and businessman who profited from his work with hydraulics. He also raced cars at the Indianapolis Motor Speedway.

“As a philanthropist, he was recognized by naming Schwitzer Hall after him,” Flaherty said. “There was a picture of him in the lobby of Schwitzer that is now in archives at the library.”

Flaherty said the name Schwitzer lived with the former building. Because there is a new building, it gave the opportunity for a new name.

“With the development of our newest residence hall, and also with Fairview House, it provided a an opportunity to recognize Butler’s history,” Flaherty said. “Fairview House is named for the current campus where Butler exists, and Irvington House reflects the name of Butler’s second campus location, before it moved to this current location.”

Both names are considered ‘placeholder’ names, meaning that the buildings could be renamed in honor of a future donor, Flaherty said.

Flaherty said she was in the meeting when the name Fairview House was suggested.

“I liked how [Fairview] connects to Butler history and place,” Flaherty said. “Irvington House does the same. Since the name is just now being released publicly, I’ve not been in many conversations about individuals perceptions of the name; however, I believe it will be well received.”

“For a lot of girls, Schwitzer was their home away from home and when they tore it down everyone was super upset,” Sweeney said. “You could never repeat it because it was one of a kind. We’re running out of classic Butler buildings.”

“It’s interesting that they are all very similar to each other,” Sweeney said. “For first-year students, the names could be miscommunicated within the first couple months of school. I think had they asked students about their opinion or to have input on the name it would have been better.”

“The names are very similar, and I know that there has been confusion, at least from the people I have encountered, around the difference between Fairview and Fairbanks,” Watson said. “I wouldn’t be surprised if the new name also sparks some confusion, especially for visitors or those new to campus.”

Watson wishes they chose a name that is more related to what Butler looks like today.

“I wasn’t surprised that they chose Irvington for the new residence hall because it relates to Butler history,” Watson said. “But the campus is moving toward a more modern look, and a historic name for the building doesn’t really represent that.”

Sweeney said she thinks the new name will not change how alumni and older students remember the building.

“The new buildings are super great but it’s kind of moving away from the typical Butler traditions,” Sweeney said. “Everyone on campus knows the building, and you know I think for a lot of alumni and students now, they’re going to come back and it will always be that is where Schwitzer was.”

The official ribbon cutting for the new Irvington House building will be in the fall of 2018.