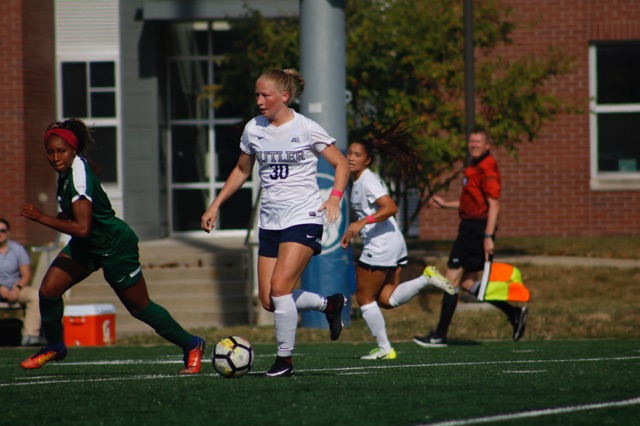 Caitlyn DiSarcina looks up field in a match against Cleveland State. DiSarcina scored the only goal in Butler’s 1-1 tie with DePaul. Photo by Jimmy Lafakis.

The Butler women’s soccer team tied DePaul University 1-1 in Chicago on Oct. 15. The tie is Butler’s third draw in the last six games.

The Bulldogs got on the board early, when redshirt sophomore defender Kyra Cooke found freshman forward Caitlyn DiSarcina for a goal in the second minute. The goal was DiSarcina’s six goal of the year.

DePaul would answer in the 16th minute. After a failed Butler clear, DePaul’s Franny Cerny scored to even the game up at one. Neither team would score in the next 94 minutes, remaining tied after both regulation and two overtime periods.

Redshirt sophomore goalkeeper Hannah Luedtke made one save and allowed the lone goal in the first half. Freshman goalkeeper Leonie Doege remained busy throughout the second half and the overtimes, making a total of six saves in the contest.

The tie with DePaul moves Butler to 10-1-4 on the season and 3-1-3 in Big East play. The Bulldogs will travel to Creighton University on Oct. 19 for a match with the Bluejays. The game will start at 8 p.m. and can be seen online on the Big East Digital Network.