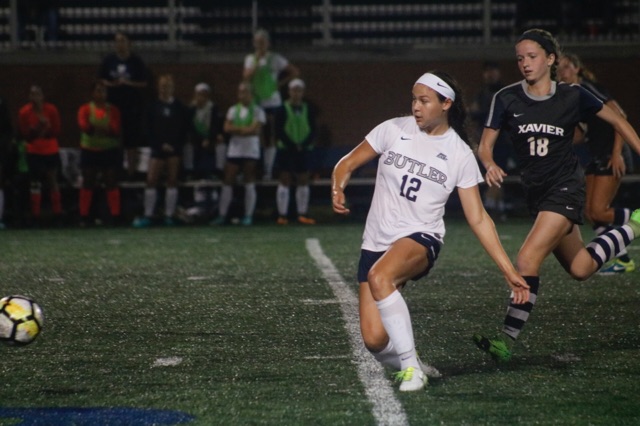 Junior forward Halle Stelbasky battles an opponent for the ball in the 0-0 tie against Xavier on Oct. 5. Photo by Jimmy Lafakis.

The Butler women’s soccer team played to their second draw in the last three games in the 0-0 match against Xavier University on Oct. 5.

The key moment in the game came in the 88th minute. Redshirt sophomore defender Annika Schmidt received a red card after getting her second yellow card of the match. The Bulldogs then had to play with only 10 players for the final minutes of regulation, as well as both overtimes. Junior forward Halle Stelbasky said the team had to be careful when playing down a player.

“We just had to sit in, that’s what any team has to do after losing a player on the field,” Stelbasky said. “Even with 10 players, I think we had a lot of good possession and a lot of chances that we could’ve scored off of. But we just didn’t get that last final touch.”

Junior forward Paige Monaghan nearly ended the match a minute into overtime. Her shot from 23 yards out was bobbled by Xavier goalkeeper Toni Bizzarro, but Bizzarro held on for the save.

The shutout is Butler’s 11th shutout of the season. This shutout ties the school record, which was set back in 2012.

The draw moves Butler to 9-1-3 overall and 2-0-2 in Big East play. The Bulldogs play their fifth Big East game against St. John’s University at the Sellick Bowl on Oct. 8 at 1 p.m.