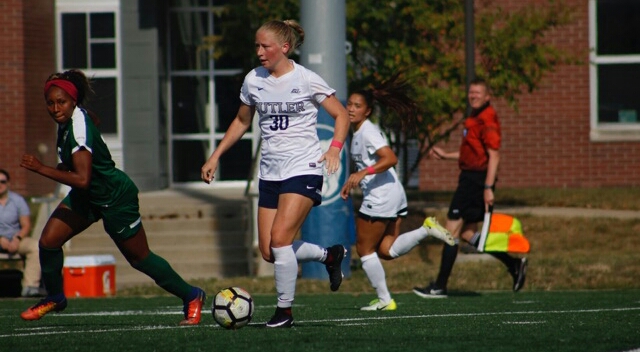 Freshman forward Caitlyn DiSarcina looks for a teammate against Cleveland State on Sept. 3. DiSarcina’s goal against Providence gave Butler the 2-1 win on Oct. 1.

Providence’s Katie Day scored the game tying goal off of a Butler deflection in the 73rd minute. It was Butler’s first goal allowed since Aug. 20 against Ohio University, their second game of the season.

Butler’s game winning goal came in the 108th minute. With under two minutes left in the second overtime, Monaghan crossed a pass on the left side. Freshman forward Caitlyn DiSarcina knocked the pass into the back of the net for the game winner.

Redshirt sophomore Hannah Luedtke and freshman Leonie Doege split time at goalkeeper. Luedtke made three saves and shutout the Friars in the first half. Doege played the rest of the match, making five saves while allowing her first goal of the season.

Providence outshot the Bulldogs 18-11 in the match. Monaghan led the team in shots with five and finished with a goal and an assist. DiSarcina and junior defender Madison Toth added a pair of shots.