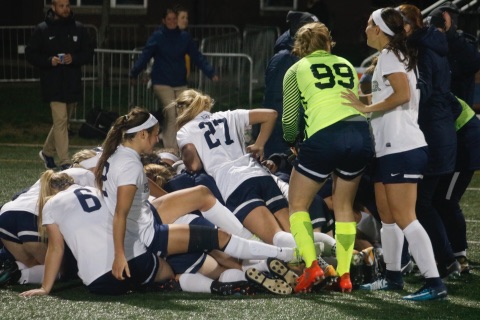 The Butler women’s soccer team dogpiles on Paige Monaghan after scoring the game-winning goal over Villanova on Oct. 26. Photo by Jimmy Lafakis.

The Butler women’s soccer team had to win or hope Providence College lost on Oct. 26 to get a bye in the Big East Tournament. After being down 1-0 early, the Bulldogs fought back to earn a 2-1 overtime victory over Villanova University.

Villanova’s Emily Kuefler scored off of a free kick in the 24th minute. The goal was the only shot the Wildcats got on goal in the first half, yet it was enough to give them a 1-0 halftime lead.

“The first 25 minutes were not at the level we needed to be in terms of competing,” Co-head coach Rob Alman said. “It was disappointing and we got what we deserved, to be honest.”

After the 75 minutes, it looked like the Wildcats would pull off the upset. However, redshirt sophomore defender Annika Schmidt got fouled in the box in the 79th minute to set up a Butler penalty kick. Junior forward Paige Monaghan scored the penalty kick to tie the match.

“Annika is an absolute handful in the box,” Alman said. “She’s always in there, scrapping and fighting. Kind of got us back in the game.”

The Wildcats nearly scored a late goal in regulation. In the 87th minute, Villanova’s Bri Austin got a breakaway chance to score. Freshman goalkeeper Leonie Doege made a save to keep the Bulldogs in the game and force overtime.

The overtime period lasted 25 seconds. In the 91st minute, Monaghan took a shot from outside the box at around 25 yards to find the back left corner of the net.

“It was a great press from the forwards that had them locked in,” Monaghan said. “It was an easy read for me just to pick up the ball from the Villanova player. And then I took a touch, looked at the goal and placed it in.”

The win gives Butler (12-1-5, 5-0-4) the No. 2 seed and a bye in the Big East Tournament. The Bulldogs will await the winner of Providence and DePaul University. That game will be on Nov. 2 at 7 p.m. at the Sellick Bowl.

“I’m so proud of my teammates,” Monaghan said. “We wouldn’t be here without them at all. It’s a great position to be in but it’s just a grind and it’s exciting. And we want to keep getting better.”