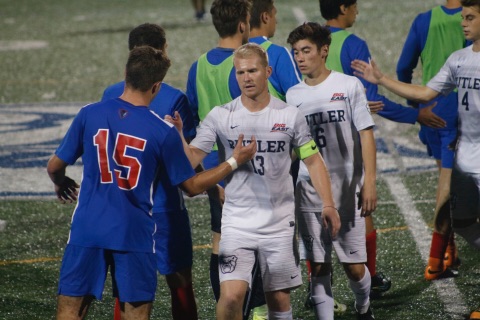 The Butler men’s soccer team got back on track with a 2-0 victory over DePaul University at the Sellick Bowl. The win stops a two game losing streak and puts the team at 8-4 on the year, 4-1 in Big East play.

Butler started off strong thanks to sophomore forward Brandon Guhl’s eighth goal of the season in the 10th minute when he intercepted a DePaul goal kick and knocked it into the net.

10′ — Guhl with the Goal! Intercepts a clear from the keeper and then beats him 1v1

In the first half, the Bulldogs outshot the Blue Demons 11-5 and 6-2 in shots on goal. A pair of set pieces late in the first half led to great chances to get a second goal, but nothing came of them.

DePaul goalie Quentin Low recorded five saves before halftime, including one on sophomore midfielder Lewis Suddick’s curling effort in the 42rd minute that was headed for the top corner of the net.

The second half featured nine shots and four shots on goal from a more aggressive DePaul offense.

With the score still 1-0 in the 81st minute, Guhl got on the end of sophomore defender Alex Lehtinen’s cross for his second goal of the match.

Brandon Guhl doubles Butlers lead in the 81st minute to make it 2-0 and 2 for him on the night. 🔥

Butler’s defense held strong for the final minutes to secure the 2-0 win. Redshirt senior goalie Eric Dick made six saves in the shutout.

The team has a big week in front of them. No. 1 Indiana University comes to the Sellick Bowl on Wednesday, Oct. 18, followed by a visit from Villanova University on Saturday, Oct. 21. Both kickoffs are scheduled for 7 p.m.