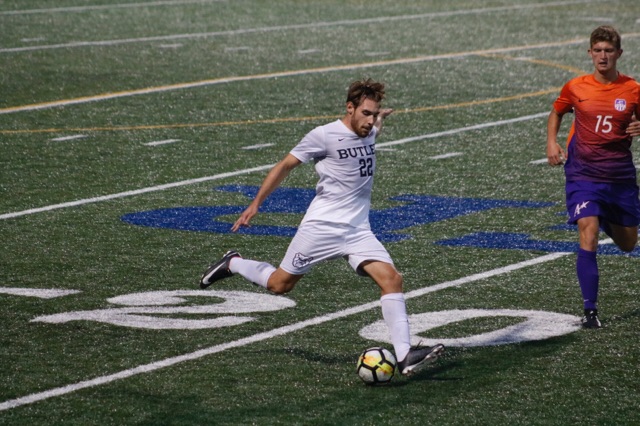 Junior defender Kieran Geldenhuys knocks a ball out of the defensive zone against Evansville. Photo by Jimmy Lafakis.

The Butler men’s soccer team were bested by Southern Illinois University Edwardsville 2-0 in a break from Big East action. The loss puts the team at 7-4 on the season.

The Cougars went ahead in the 17th minute thanks to Mohamed Awad put home the rebound after a save from redshirt senior goalie Eric Dick. The goal was enough to give SIUE the lead heading into halftime.

Both teams had five shots in the first half and the Cougars held a 2-1 shots on goal advantage. The Bulldogs were on the front foot most of the time but were unable to turn their possession into scoring chances.

Devyn Jambga’s goal in the 61st minute doubled the Cougars’ lead and would be the final tally in the match.

Butler mustered only two shots in the second half, one on goal. Sophomore forward Brandon Guhl was the only Bulldog to record multiple shots with three.

Regular starting midfielders Lewis Suddick and Isaac Galliford did not play in the game. They were replaced by senior Wyatt Scott and redshirt sophomore Braden Van Allen.

The Bulldogs will return to Big East action when they host DePaul University at the Sellick Bowl on Saturday, Oct. 14. Kickoff is scheduled for 7 p.m.