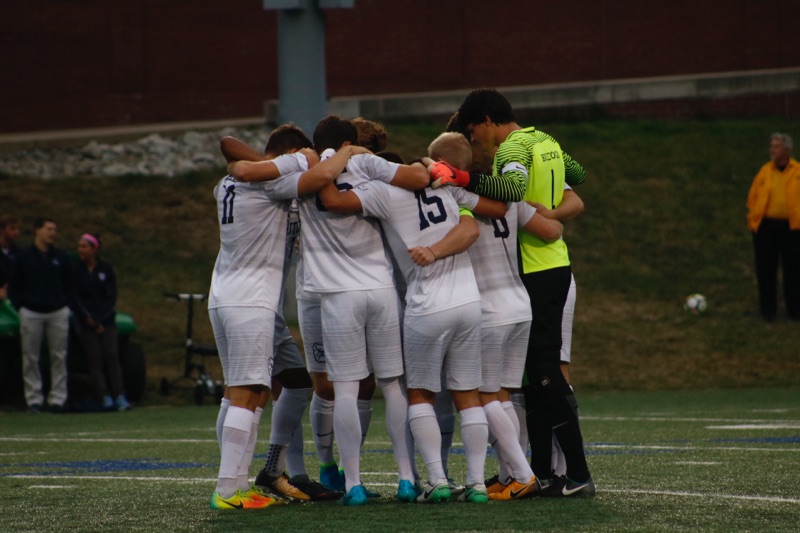 Butler men’s soccer team huddles before a match against University of Evansville. Photo by Jimmy Lafakis.

The newly instituted Bulldog Team Cup is underway. Starting this fall, teams on campus can compete against each other to win points in various categories.

Hopkins said she would like to see the athletes become more competitive in different outlets, such as organizing community service activities.

“They will be challenged to really get involved in things other than their sport,” Hopkins said. “That really is the underlying goal. We want them to get more involved in the community, because that’s a piece of us that we certainly want to build more in some of our athletes.”

The Student Athlete Advisory Committee has one or two representatives from each team and meet to talk about matters and ideas that could benefit the school, teams and campus life.

Senior Madison Bieganski is the president of SAAC and a member of the track and field team.

There are seven categories in which teams will compete against each other to earn points throughout the year.

3. Community Service: The team with the highest number of community service hours earns 100 points, second place will earn 75 and third will earn 50.

4. Life Skills: Attending a life skills workshop allows the team with the highest percentage of members in attendance to earn 50 points, second place will earn 35 and third place earns 20. The workshops can focus on a range of topics, including careers after college and managing time as a student athlete.

The team that tallies the highest number of points by the end of the academic year will be the champion. They receive a trophy and bragging rights over the athletic department.

“When we were recruiting these student athletes, one of the things we emphasized to the parents is that they are lending us their child, but we want to send them back as an adult and to have helped them experience things that they haven’t experienced up until now,” Hopkins said.

Paige Monaghan, a junior soccer forward and vice president of SAAC, said initially it was difficult for the fall sports teams to grasp the team cup concept because it was new and teams were focused on playing.

However, things have changed ever since Hopkins released a ranking of the team cup standings.

“[Sonya] sent out a ranking actually and it was men’s basketball, women’s swimming, and men’s tennis and golf were tied,” Monaghan said. “Then all of a sudden, the football team and the women’s and men’s soccer team said, ‘Wait a minute, what is this? I want to be involved.’”

The most recent rankings released at the beginning of October are as follows: Men’s basketball leads the current standings with women’s tennis in second. Women’s swim and women’s golf are tied for third place.