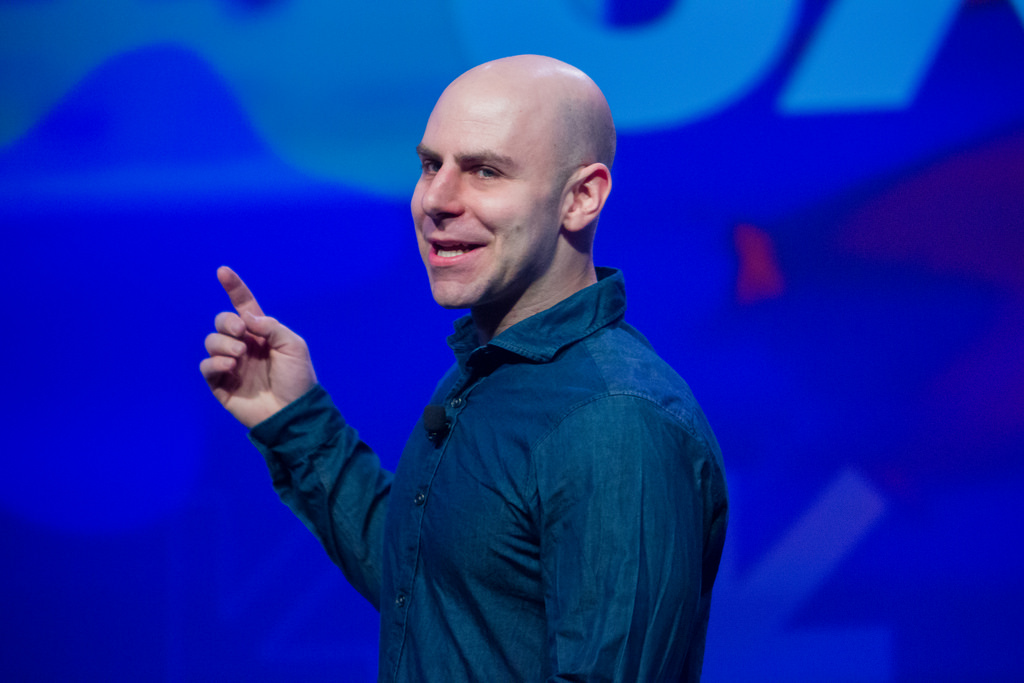 Author Adam Grant talks to a crowd while on stage. Photo courtesy of Flickr.

Adam Grant, a psychologist and New York Times best-selling author, will visit Butler University on Oct. 4, at 7 p.m. to speak about his book, “Originals: How Non-Conformists Move the World.”

His other books include “Option B: Facing Adversity, Building Resilience, and Finding Joy,” which he co-wrote with Facebook COO Sheryl Sandberg, and “Give or Take: Why Helping Others Drives our Success.”

His books have sold more than one million copies and have been translated into 35 different languages.

Grant is also a professor of psychology and management at Wharton School of Business. He has been the top-rated professor at Wharton for six years in a row.

Grant is also a public speaker, and his TED Talks about his research have been viewed more than nine million times. He has also done keynote speaking and consulting work with clients such as Facebook, Google, the NBA and the Gates Foundation.

Much of Grant’s research is related to how people find motivation, creativity and meaning in their lives. In “Originals,” he writes about the characteristics of original people and how they find success in pursuing new and untraditional ideas.

The book includes research and anecdotes about all different kinds of originals. He writes about Martin Luther King Jr., who rewrote his “I Have a Dream” speech at 3 a.m. in the middle of the night before he gave it, as well as the founders of Warby Parker, who procrastinated starting their company and took backup jobs out of doubt.

Arianna Morrison, a sophomore dance performance major who has read Grant’s book and seen his TED Talk, finds his ideas about originals inspiring.

“First of all, I liked his idea that procrastinators can actually be successful people. That was nice to hear,” Morrison said. “His theories are different than what you would expect, but I think it’s worth listening to. It’s inspiring, because it’s not the way that people normally tend to think.”

As a dance major, Morrison also said she felt that a lot of Grant’s research stands true when it comes to her experience with creativity and originality.

“Speaking as a dancer who has worked with choreographers, I’ve felt that great things do come out of people who take a lot of time, who go back and forth, who revise,” Morrison said, “And this is exactly what Adam is saying.”

Catherine Lescak, a sophomore international business major, said she is also excited to attend Grant’s talk on Wednesday. She has not read Grant’s books, but she said she can tell from his TED Talks and what she has read about him that his presentation will be interesting.

“I just really identify with his ideals. What he says about originality is really thought-provoking, forward-thinking and inspiring, I think,” Lescak said.

Associate Provost Michelle Jarvis is in charge of the One Butler series this year, and hopes that the theme of creativity will inspire members of the community to foster more creativity in their own lives.

“One Butler: Creativity will take us on a exploration of originality and the many forms creativity can take in our lives,” Jarvis said.  “We will learn, experience and foster the creative process so we can think, act and work differently, realizing our true creative potential.”

The idea of Adam Grant being a speaker for the series first arose in a conversation between Jarvis and President James Danko, because they thought Grant’s research about originality would fit well with this year’s theme.

“It was perfect timing,” Jarvis said. “President Danko returned to our conversation telling me that he just received an email from Adam Grant. I believe President Danko knows Mr. Grant, and we were both delighted to learn that he was going to be in the area. One Butler: Creativity found its first guest speaker.”

Adam Grant’s talk on Oct. 4 will take place at the Schrott Center for the Arts. Admission is free, but tickets are required. Tickets can be picked up at the box office in Clowes Hall or at the Butler Arts Center website.