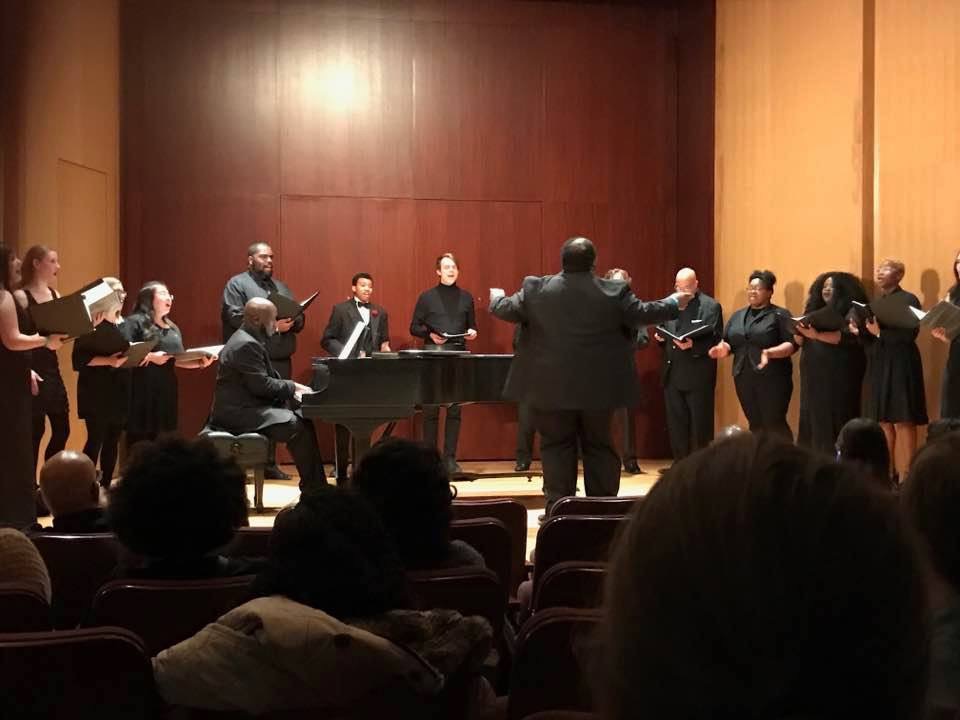 On Sunday, Feb. 25, the Black History Month Concert, a collaboration between Butler’s School of Music and the Efroymson Diversity Diversity Center, will be performed at the Schrott Center for the Arts.

The concert will feature Butler University guest artist Angela Brown, a world famous opera singer, as well as all Butler student choirs and a guest choir from the Eastern Star Church.

This is not the first time Butler has performed a Black History Month Concert, but it is the first of this scale and with this extent of collaboration. Last year, then Master’s student Jeremiah Marcèle Sanders organized the event for the first time, and it was largely student-run. This year Sanders is serving as co-director with John Perkins, the associate director of choral activities at Butler.

Sanders originally had the idea for the event when he found himself thinking about his education in music, and how few African-American composers students study and are exposed to.

“I felt I hadn’t heard a ton by composers of African-American descent or of the African-American diaspora,” he said. “There was just one here and there. And then we talked about jazz music, which is where African-Americans are most celebrated in music, it seemed. I thought, there have to be more composers writing in the art music tradition, in opera, ballets, classical music in general, and all of the things outside of the genre of jazz.”

After the success of last year’s concert, the administration has worked with him to expand upon his original idea. They have even been able to bring Angela Brown, a renowned opera singer, to perform at the concert.

Brown was a featured singer in the recording of “Ask Your Mama,” which won a Grammy Award. And since performing the lead role in the opera “Aida” at the Metropolitan Opera House, she has received worldwide attention and performing opportunities.

Sanders said that he has been astonished to see how his original idea from last year could grow into something bigger — something big enough to reach a performer like Brown.

“It’s so special to think that this thing that I planned out of my own interest would snowball into a world famous opera singer being at the concert that I devised. But it’s so exciting,” he said.

He is also pleased that many Butler students will be performing in the concert, and that enthusiasm for the concert is extending to people beyond himself and his friends.

The administration, especially within the School of Music, has indeed embraced what Sanders has started. John Perkins, the associate director of choral activities at Butler, said that he also hopes this concert will help educate both students in the choir, and the audience.

“It gives us a nice moment, and an important moment to step back and look at our predominantly white institution and ask ‘why is it so?’” he said. “And we grapple with this through some of the texts. We’re doing, what I grew up with as a children’s church song, ‘This Little Light of Mine.’ But when you look into it, it’s also about shining a light in an oppressive place, not just about a light in the darkness.”

The concert is not only an opportunity to honor African-American composers and artists during black history month; Jenkins also sees it as one possible way to fuel a larger conversation about racial injustice.

“I know it may seem strange having a mainly white choir singing African-American music, but at the same time, it’s a way of showing that we’re for equality and we’re recognizing this,” Perkins said. “Singing in a concert isn’t going to fix this, but it’s a way to start talking about these concepts on campus.”

Some of the students in the choir, such as sophomore pre-pharmacy and french major Hollyann Beck, have really enjoyed being exposed to a new and different music by African-American composers.

“I really love the way Dr. Perkins does all sorts of different kinds of music for this show,” Beck said. “I feel it’s a really enriching choir experience, as opposed to choirs I’ve done in the past where I’ve just done traditional choir music or musical theater songs. This has really broadened my horizons.”

Three Butler choirs will perform at the concert: Spectre, Chorale, and University choir. They will also perform a group choir piece, “Oh Give Thanks” by Charles Nicks Jr., which is directed by junior music education major Markell Pipkins.

Pipkins taught the choirs “Oh Give Thanks” in the oral tradition, meaning it was taught by word of mouth rather than by reading music. Jenkins said that this way of teaching really captured the spirit of the song, and that he is very happy Pipkins was able to be so involved in the show.

“He’s so wonderful to work with, I’m so happy we’re able to lift up a student and give him that last slot on the concert,” Perkins said. “It’s always good to give students a platform like that.”

Perkins also said that, while this is just the second year the Black History Month Concert will be performed, the music department hopes to make it an annual event and to continue improving the concert in the future.

Sanders agrees that the future of the concert looks bright, especially with the possibility of even more collaboration within the college. He hopes that in the future more musical groups will become involved, beyond vocal groups.

“Last year it was pretty much just voices– choir pieces, and students who sang solos,” Sanders said. “So, I’m just hoping that maybe the band department and orchestra can be a part of it in some way in the future as well.”

He hopes that featuring many different departments playing the music of African-American composers will help educate people about the many black composers that are often skipped over in history.

“It would be neat to see how my initial, central theme relates to those different departments,” he said. “And to see what cool music is out there that we haven’t heard, because African-American composers are often not programmed as much.”

On Feb. 25 these composers will be programmed. The show is at 7:30 p.m. in the Schrott Center for the Arts, and tickets can be purchased at the Clowes Hall box office, or at butlerartscenter.org.