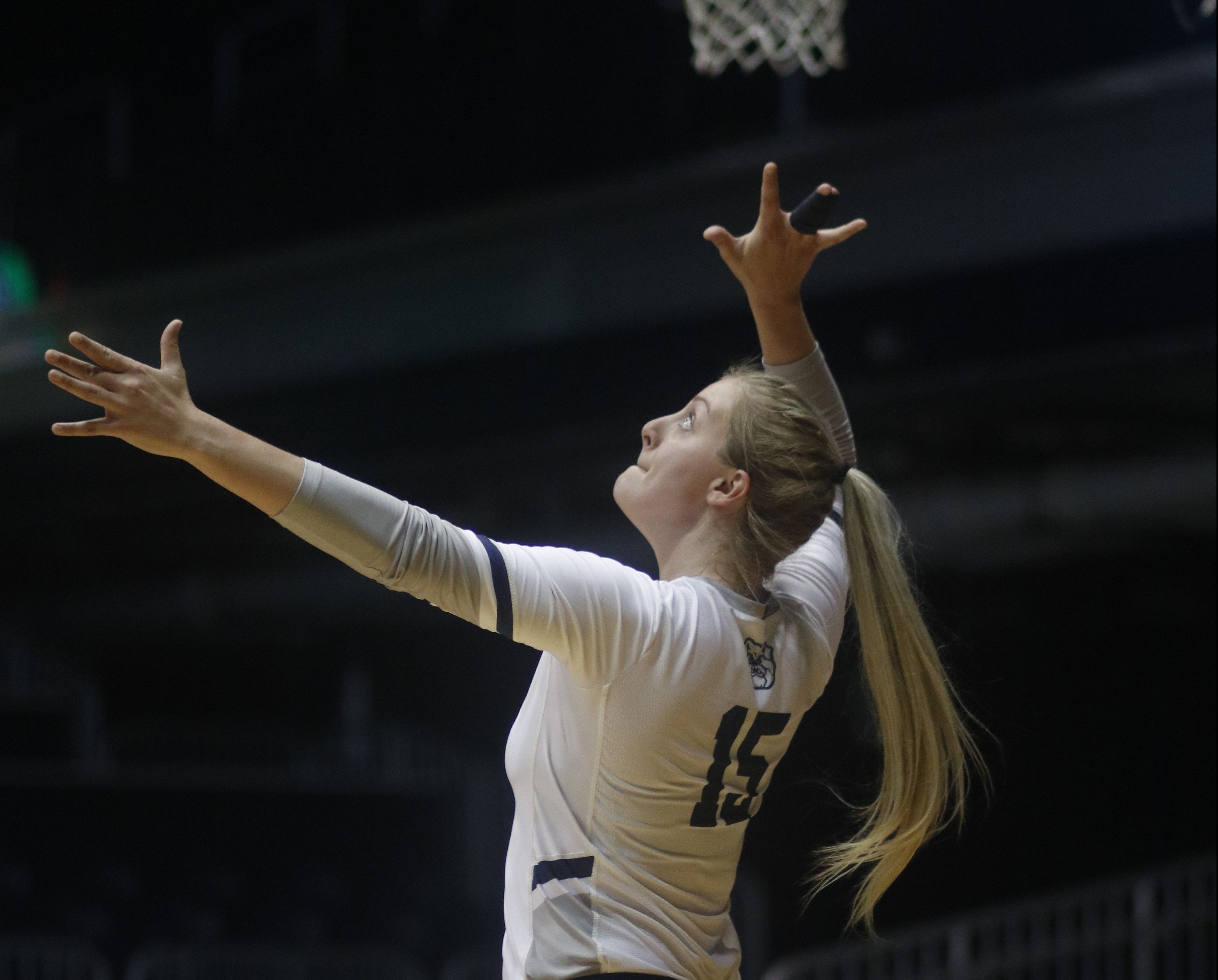 Her passion for the game kindled at a young age. Once redshirt junior outside hitter Whitney Beck saw a local high school star dominate on the volleyball court, she started to dream of the future.

“This girl was really good and hit the ball really hard,” Beck said. “I said, ‘I want to be that girl.’ I took volleyball by the reins and went out swinging.”

Although she does not recall the star player’s name, that caused a shift in Beck’s mentality. She enjoyed playing softball growing up, but watching the older player led her to pursue volleyball.

“I’ve just always wanted to bring intensity,” Beck said. “I love the big plays, the big blocks and the great digs. I love when we are intense.”

Her strength impresses her teammates, coaches and the conference. Beck has recorded 185 of the Butler University volleyball team’s 688 kills and won Big East Offensive Player of the Week on Sept. 12. Head coach Sharon Clark said Beck is one of the hardest hitters she has ever seen.

“She’s got a lot of power,” Clark said. “She’s always been a hammer. That’s why we recruited her. She’s always had that hammer.”

Beck redshirted her freshman year after tearing her ACL on the third day of preseason. Her left knee went the opposite direction of her body as she came down after a swing. She said the nine months of inactivity was very detrimental to her.

“I had a rough first couple years here at Butler,” Beck said. “ACL surgery is not a joke. It was hard for me because I had never been injured before. I definitely did not take it very well, but I bounced back.”

Her resiliency throughout the recovery process impressed her head coach.

“The one thing that’s great about her is that Whitney put in the work,” Clark said. “She changed her diet a couple years ago, does all the extra stuff in the summers and springs and really pushed herself. She chiseled that body to get it to perform better for her.”

Beck refers to her father, Todd, as a “huge health nut.” She said her father takes eating well and training very seriously.

“I knew I had to change my ways and be more serious about nutrition,” Beck said. “I completely changed my nutrition. All I would eat was meal-prepped food of protein and carbs, and my dad taught me how to plan meals ahead and recipes to cook in bulk. I loved any meal with steak, whether it was plain steak or beef stew.”

When junior outside hitter Anna Logan missed the season’s first 10 games due to an arm injury, Beck said she knew she had to step up.

“It’s always hard losing a player to injury, no matter who it is,” Beck said. “We just went out, faced adversity head-on and went out and played. We had a great preseason.”

Although Beck does not have a specific pregame routine, she said she starts getting focused during warmups.

“When the music plays and the opponents are across the net, I just get really zoned in during that time,” Beck said.

Her competitive nature has rubbed off on the Bulldogs, and Logan said she is excited to play with Beck during the Big East season.

“Whitney often reminds the team that we can’t take plays off if we want to reach our full potential,” Logan said. “She is not only competitive during games, but during every drill in practice, she gets after it. She’s been focusing on blocking a lot this year and her hard work has paid off.”

Butler earned its first conference win against Big East foe Xavier University last Saturday. The Bulldogs now stand at 11-3 (1-1 Big East) on the season. Senior setter Makayla Ferguson helped Beck record eight kills in that match and said she knows she can count on her hitter.

“I think Whitney is someone I can always go to when we need a crucial kill,” Ferguson said. “I know she will always deliver when I set her. She is the smartest volleyball player I have ever played with. Her volleyball IQ is through the roof.”

The Albion, Illinois native entertained the possibilities of playing at the University of Tennessee or Xavier, but said she feels that Butler is her home away from home because her teammates have become a second family.

“I come from a small town and a small high school,” Beck said. “Adapting here was easy because of the small community feel I’m used to. You always go back and think about the what-ifs. But then, you look at where you are now. You wouldn’t trade it for anything.”

The Bulldogs will continue Big East action against DePaul University tonight. First serve at Hinkle Fieldhouse is slated for 7 p.m.

“My family has always taught me to enjoy life and have fun in every situation,” Beck said. “I am a very quiet person, believe it or not. But, I just love enjoying the ride.”