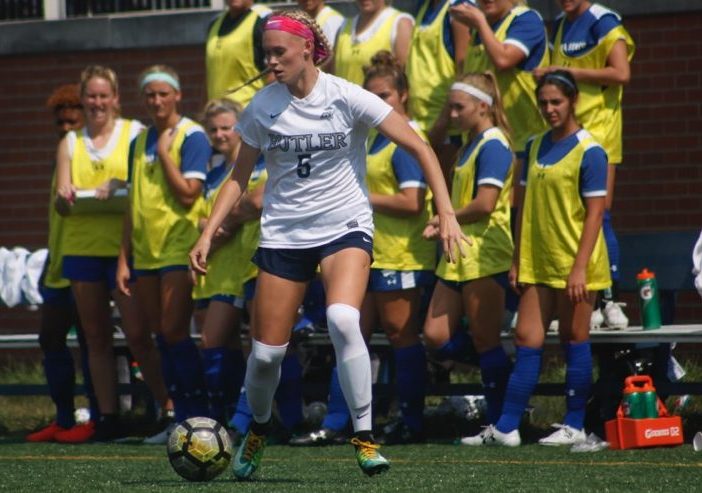 One goal was all Butler University women’s soccer team needed to beat Indiana State University. The Bulldogs completed the shutout over the Sycamores 1-0 on Sept. 17.

Butler scored the lone goal of the match in the 71st minute. Junior defender Madison Toth made a great pass to the box to junior forward Breann Pempek. Pempek headed the ball past the goalkeeper and in the right corner of the net for her first goal of the season.

“My job was to just make contact with the ball,” Pempek said. “Luckily I was able to do that and put it in the back of the net.”

The win is Butler’s sixth in a row. They have not allowed a goal in the streak and have only allowed one goal this season. Redshirt sophomore goalkeeper Hannah Luedtke made two saves to take her third win at goal this year.

The Bulldogs dominated offensively, outshooting the Sycamores 14-4 throughout the match. Junior forward Paige Monaghan led the team with five shots while Pempek added four. Butler also had eight corner kicks, while Indiana State only took one.

The win moves Butler to 6-1-1 on the season. The Bulldogs welcome Chicago State University for Butler’s final nonconference game on Sept. 21 at 7 p.m. at the Sellick Bowl.