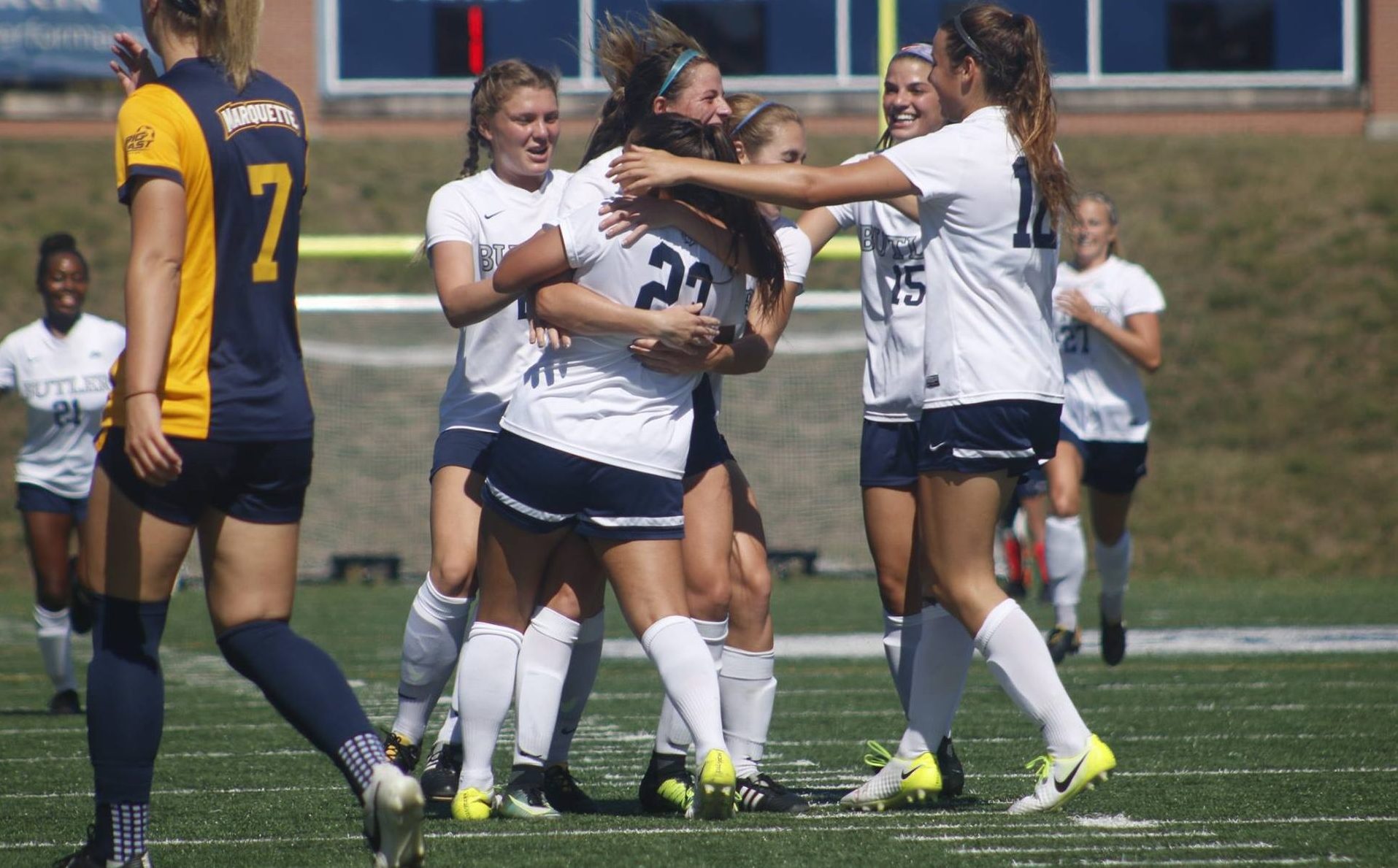 Butler women’s soccer junior forward Paige Monaghan celebrates with her teammates after scoring the first goal in Butler’s 3-0 win over Marquette on Sept. 24. Monaghan would score another goal and add an assist later in the game. Photo by Jimmy Lafakis.

The Butler women’s soccer team trounced Marquette University 3-0 in the team’s Big East opener on Sept. 24. The win moves Butler to 8-1-1 overall and 1-0 in Big East play. The Bulldogs now have one of the nation’s longest win streaks with eight.

The Bulldogs took a lead early and never looked back. Junior forward Paige Monaghan scored the game’s first goal in the 12th minute, with assists to junior forward Halle Stelbasky and freshman forward Elena Gutlove. Butler would lead 1-0 at halftime.

Take a look at Paige Monaghan’s first-half goal. The Bulldogs still hold a 1-0 lead over Marquette late in the opening 45 minutes. pic.twitter.com/BYMKzLarXc

Monaghan and Stelbasky teamed up to find junior midfielder Gabrielle Lemkuil for Butler’s second goal in the 54th minute. Lemkuil got the ball off a deflection and snuck a shot past Marquette goalkeeper Maddy Henry for her first goal of the season.

Monaghan’s second and final goal secured the win for Butler. She stole a pass and took the ball down the field. After hitting the right post on her first shot, she got the deflection into the back of the net. Monaghan said most of her and the team’s success on the field is due to great coaching.

“It takes a lot of preparation,” Monaghan said. “Our coaches really tell us it’s all about prep. So that’s what we did all this week, which was awesome.”

Monaghan led the Bulldogs in shots with five and shots on goal with three, in which two of those she scored. Butler outshot Marquette 11-7 in the game.

Redshirt sophomore Hannah Luedtke and freshman Leonie Doege combined for the win at goal. Luedtke made one save in the firsts half while Doege made two.

The Bulldogs are in the top three defensively in the nation, with only one goal allowed all season. Freshman defender Julia Leonard said the team spent most of the week breaking down what Marquette was going to do on offense.

“Communication was key,” Leonard said. “We had to make sure who was going to drop back to add that cover defensively. And we did a great job of that.”

Butler is back in action on Sept. 28 at Seton Hall University. The game will begin at 7 p.m. and can be streamed live on the Big East Digital Network. Monaghan said this week will be a test for the team.

“It’s really going to state who we are,” Monaghan said. “It’s really about how we prepare and how we focus. And I really think it will be a challenge for us but I hope we overcome it.”

The team will conclude their two-game road trip on Oct. 1 at Providence College.