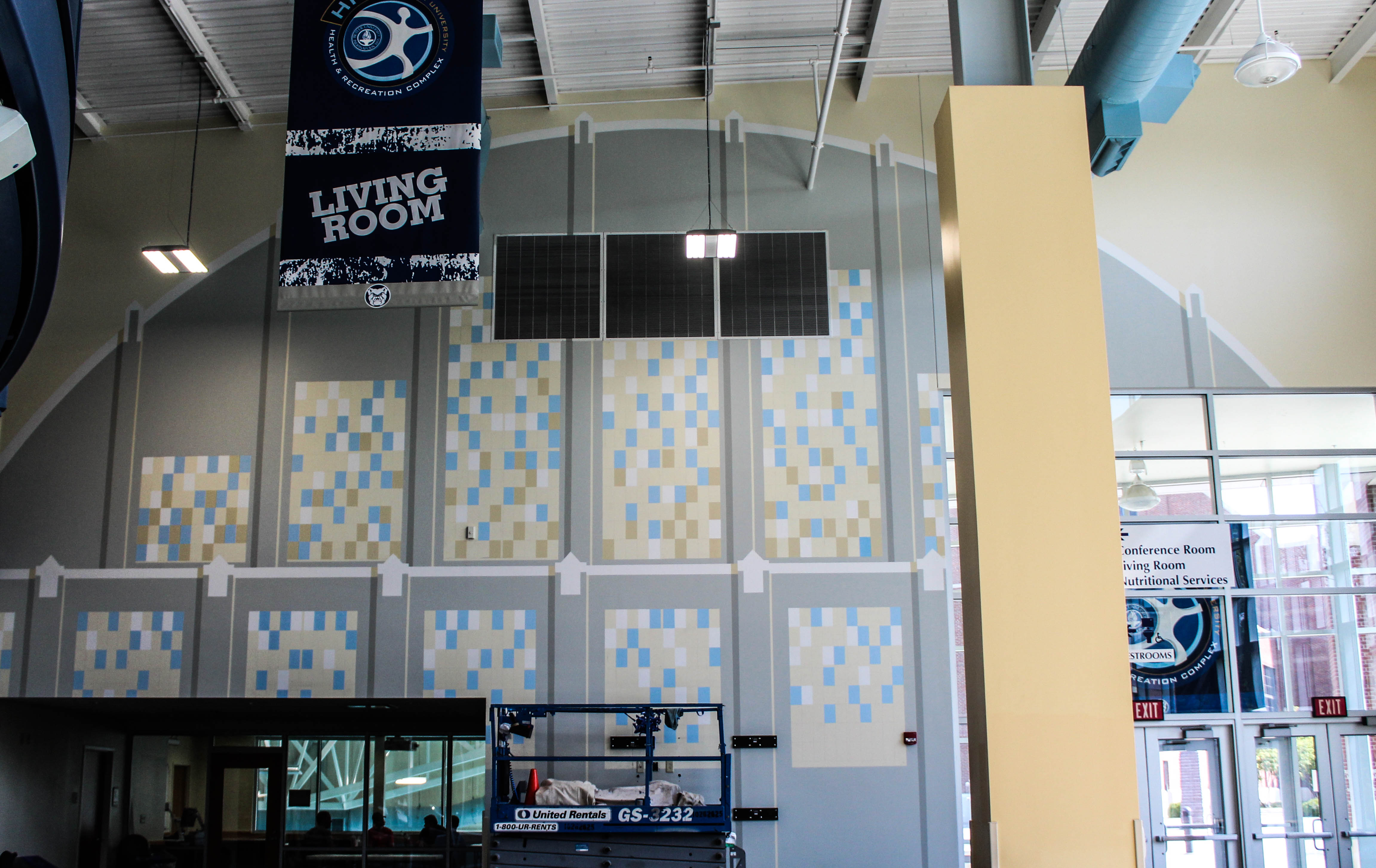 Mural in progress above the north entrance of the Health and Recreation Complex. Photo by Emma Hall.

A new mural of Hinkle Fieldhouse was added to the wall near the east entrance of the Health and Recreation Center on Sept 23.

The project started on Sept. 11 but there were several months of brainstorming with the artists beforehand, Scott Peden, director of recreation, said.

“Eighty percent of the project was completed last Friday, but they’re now on some final touch-ups that require some tedious detailed work,” Peden said. “It should all be done this Friday.”

Peden came up with the idea to create the mural after seeing an opportunity to add something new to an empty wall.

“Back in the spring, I was running on the track and I looked at something a different way and it was apparent to me there was a huge blank wall,” Peden said. “We always try to keep things fresh in the HRC.”

Peden said the lights in the HRC were replaced three years ago, which shows more opportunities of where to add new things. Peden knew he wanted to put something on that blank wall and right away a painting of Hinkle came to mind.

Back in 2010, the senior class gave their money to the HRC because they were the first class to come in with the new recreation center.

“They couldn’t agree on what their class gift would be so their senior class president gave me all of their money,” Peden said. “Before starting the mural, I ran the idea back to the class president and she loved it. The funds for the mural were then covered by the Class of 2010, so that wasn’t an issue.”

In terms of the mural, Peden said he “planted the seed, and the artists poured the water.”

“They expanded on the idea big time,” Peden said. “It was a great marriage in terms of our ideas.”

Chris Blice was one of the artists who worked on the mural. He said for the past two weeks they probably spent about seven hours per day painting.

“It was all done with a ruler, a level and a pencil,” Blice said. “It’s all line work, and a lot of patience.”

Blice has done work before in the Johnson Room in Robertson Hall and even some work in Hinkle.

The artists painted another small canvas down by the swimming pool in the HRC. It depicts bulldogs in bathing suits lounging by a pool.

A photo of the mural near the pool area of the HRC. Photo by Zach Horrall.

The bulldog painting was made for the many children that have swim lessons at the HRC, Peden said.

Peden said he has a personal passion for the built environment, and what people feel about a space is reinforced by what they see visually.

“It’s always so important for us to stay on top of trends to do everything we can to maintain and create positive energy that reinforce creativity,” Peden said. “I’m hoping that the outcome of this whole place area can add to the list of places students want to go to study and socialize.”

Community students already see the HRC as a potential spot for them to hangout in between classes, Peden said.

“I just want a place where everyone feels welcome,” he said. “We had a smoothie bar a while back that didn’t work out, but we are in conversation to try and get something back in there. Starbucks is always packed so if we could get students to think of this space instead, that would be great.”

Sophomore business major Kayleah Ortiz goes to the gym every day. She said that the environment of a gym reflects a lot on her workout.

“It’s important that the gym is bright and full of creativity,” Ortiz said. “If the environment feels positive, you’ll get a much more positive workout.”

Ortiz thinks it is a great idea to be inclusive of the little kids also coming to use the HRC.

“I’m glad they added the bulldog painting by the pool,” Ortiz said. “It was really boring down there before. It’s good to keep in mind that our community uses the HRC, not just Butler students.”