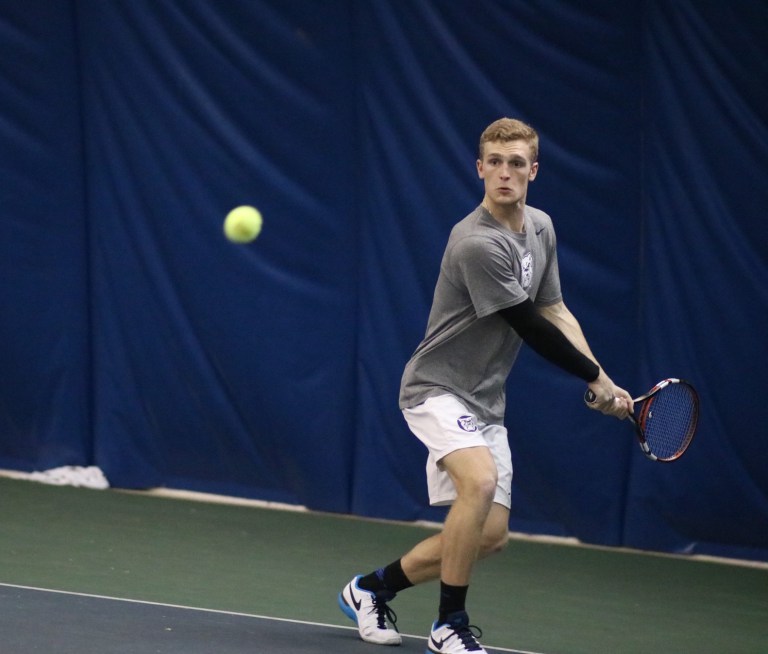 Alex Woldmoe returns a serve in a match while playing at Butler. Collegian file photo.

The last time Alex Woldmoe was at Butler, he was celebrating a Big East tennis championship with his teammates. After graduating in 2017 he has returned in a new role. Woldmoe is now a volunteer assistant coach at his alma mater this season.

“It is a dream come true,” Woldmoe said. “I love this school, and it is a privilege to be able to coach such a great group of individuals.”

During his tenure at Butler, Woldmoe notched a 32-28 singles record along with a 45-28 doubles record over four years. He also led the team to a Big East tournament championship and a NCAA tournament berth last season where the team fell to Ohio State in the first round.

Head coach Parker Ross had nothing but high praise for Woldmoe and said he will be a nice addition to the coaching staff.

“[He’s a] very hard worker who studies the game closely,” Ross said. “He sometimes knows more about the college tennis landscape than I do, which is nice. He always has his eye on the opponents and different players.”

Woldmoe’s tennis knowledge and leadership went hand-in-hand with his role as team captain.

“It’s great to have Alex back and on the coaching staff because he provides continuity after being a captain on the Big East championship winning team last season,” Ross said. “He also wants some coaching experience under his belt, so it’s a perfect fit for both of us.”

Former teammates and current juniors Adrian Mag and Mason Dragos stressed the importance of having Woldmoe back.

“It’s refreshing to have him back, even though he won’t be playing right next us,” Mag said.

Dragos was a co-captain with Woldmoe last season.

“He’s a great team leader and I think that’s why he wanted to come back,” he said. “He’s very dedicated and always puts his 100 percent effort into everything. It will be weird having him on the sidelines, but having him so shortly removed from college tennis will be beneficial for us.”

When Woldmoe is not coaching, he works full-time at Roche Diagnostics as a  two-year rotational program member where he works on marketing, sales and finance. Roche manufactures equipment for research and medical diagnostic applications. Woldmoe said he believes he will end up in the financial branch of the business world.

“While it is not necessarily in my job description, the most important thing to me is helping guys on the team succeed in all aspects of their lives,” Woldmoe said. “Having a positive influence on others is an extraordinary thing and I feel blessed to be in a position to do that.”

Woldmoe said a bonus part of his job is getting to mentor his younger half brother Addison Cazier, a freshman on the tennis team.

Butler tennis runs in the family. Woldmoe has an older brother as well, Austin (‘15). The brothers were teammates for one season during the 2013-15 campaign.

“Being able to play doubles with my older brother in the 2014-2015 season is something I will never forget,” Alex said. “After growing up playing tennis together, it was special to share the court with him as a teammate and partner in his final season.”