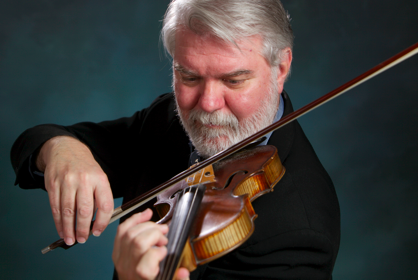 Davis Brooks is a professor of violin emeritus at Butler University. Photo courtesy of davisbrooksviolin.com

The Duckwall Artist Series is an intimate recital series performed by the school of music faculty and guest artists in the Jordan College of the Arts . On Tuesday at 7:30 p.m., Davis Brooks will perform “Violin and Electronics” and include some of his own original compositions.

He will collaborate with fellow educator and Butler faculty member Frank Felice, who will be the sound engineer for the performance. Felice teaches as an associate professor of composition, theory and electronic music in the school of music. The school of music will also perform his music.

Felice’s Facebook page reads, “I am an eclectic composer who writes with a postmodern mischievousness: my pieces can be comedic/ironic, simple/complex, or humble/reverent. My recent projects have taken a turn toward turn towards the sweeter side, exploring a consonant adiatonicism.”

Felice and Brooks will conclude their “Violin and Electronics” fall tour with the Duckwall series. The duo performed all through September at major universities including Clarke College, University of Iowa, University of Nebraska-Lincoln, and Drake University.

Brooks has a musical background as a soloist, educator, orchestral musician, studio musician, a concertmaster on Broadway, conductor, and chamber musician.

He has also taught at other institutions including Baylor University, Wayne State University, the University of Wisconsin Eau Claire and Bucknell University.

Senior Jackie Volk is a Butler violin student and has had the opportunity to have sample lessons and masterclasses with Brooks.

“He is very technical, and he really understands how to get the right tone and sounds out of the instrument,” Volk said.

Brooks has previously released two solo CDs, one of music for violin and electronic media entitled “Violin and Electronics” and one of music by composer C.P. First. Both recordings are available on iTunes.

“Anyone with a passing interest in new music or electronic music ought to take a listen to Brooks’ self-released album,” Scott Shoger stated in his 2011 Nuvo review of Brook’s concert.

“I am very excited to see his recital,” Volk said. “He can do pretty much anything on violin; his instrument is very much apart of him.”

In the JCA community, Brooks is most recognizable as the husband of Lisa Brooks, interim dean of JCA, who is also a violin professor in the school of music.

They currently share a studio office on the second floor of Lilly Hall. Davis Brook’s studio and the number of students he teaches is minimal now that he is professor emeritus at the school.

The concert will take place in the Eidson-Duckwall Recital Hall. It is free and open to the public.