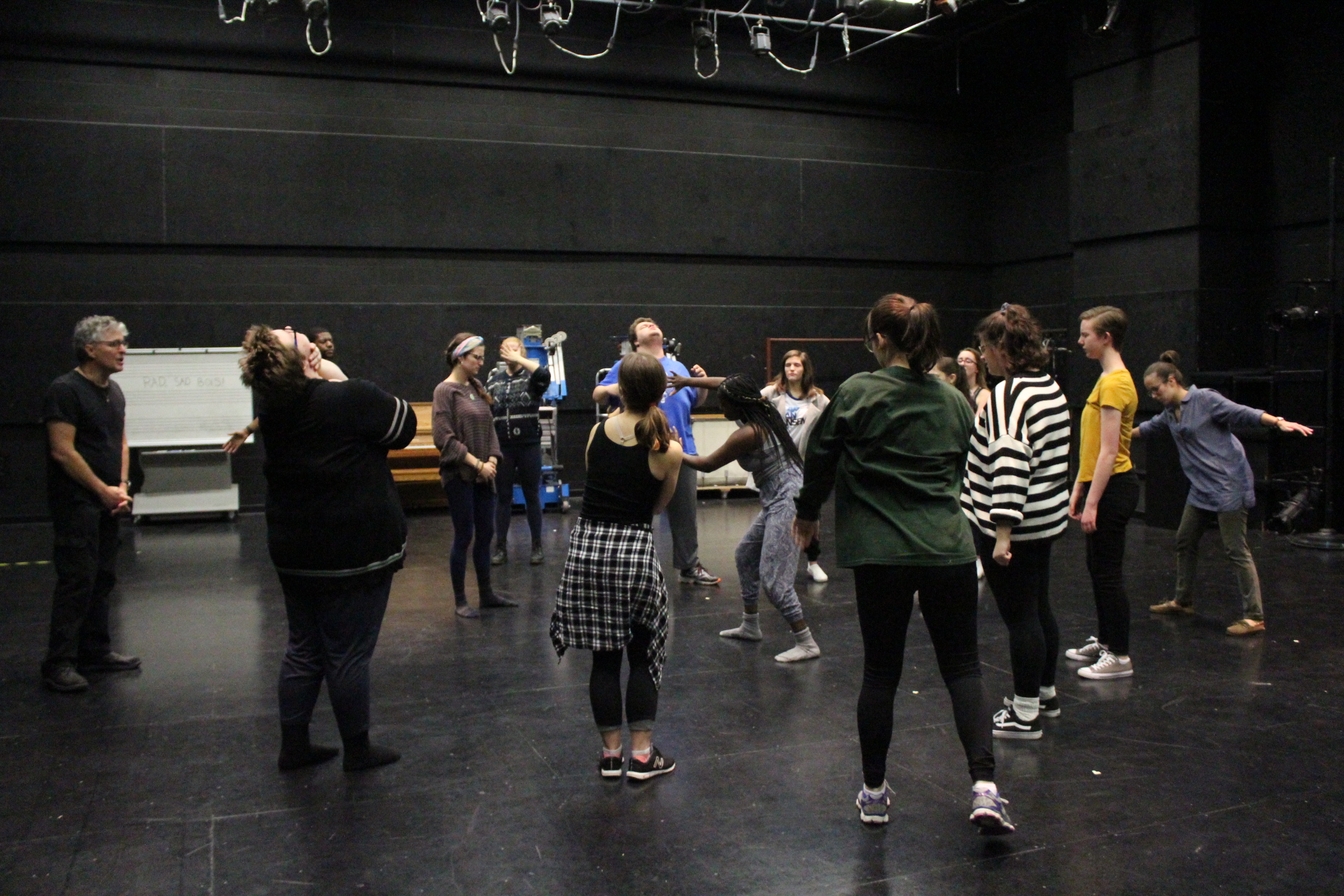 Activist and performer Tim Miller put on a workshop for Butler students during the theatre department’s Acting 1 and Acting 3 classes. Photo by Emma Hall.

Miller has focused his creative and political work on marriage equality and addressing injustices facing lesbian and gay couples in America since 1999. His work as a performer and writer “explores the artistic, spiritual and political topography of his identity as a gay man,” according to his website.

People who know Miller know that he is one of the “NEA Four.” The four — Karen Finley, Tim Miller, John Fleck, and Holly Hughes — were performance artists whose proposed grants from the United States government’s National Endowment for the Arts were vetoed by John Frohnmayer in June 1990. Grants were overtly vetoed on the basis of subject matter after the artists had successfully passed through a peer review process.

Glenn Williams is a sophomore theatre arts administration major and attended the workshop on Tuesday. He said that Miller can connect with students, especially in the arts.

“I think he will be able to connect with other students because I think he has gone through being told no,” Williams said. “Everyone has felt rejection in their life and he is one who overcame and still succeeded.”

In his one-man show, he will perform excerpts from his works and speak about the role performance plays in “constellating identity.” He has done this presentation at a number of institutions including Pennsylvania State University, Vanderbilt University, Ohio Wesleyan University and Emory University.

Dan Callahan from the theatre editorial “Show Business” wrote high remarks after seeing one of his shows live in 2010.

“We are with a performer who has mastered his craft, and being in the audience is like taking a smooth drive along a Pacific coast highway in an Alfa Romeo that has peerless gear shifts. The instant Miller is on stage we are his, and away we go. He has managed to keep his tenderness and sensitivity intact, and this merits your attendance and applause,” Callahan wrote.

In addition to the performance tonight, Miller also held workshops with students from Butler’s theatre department. The workshop was open to the Butler community yesterday during the theatre department’s Acting 1 and Acting 3 class times.

Sophomore theatre major Ian Hunt will be one of the theatre students attending the workshop. His acting class was cancelled Tuesday so he could have the opportunity to work with Miller.

“Miller will bring a whole new perspective on performance art and solo theatre that we haven’t really dwelled on before and that we have not covered yet, which is exciting,” Hunt said. “Also, he has been teaching workshops for most of his career, so his insight and experience would be incredibly beneficial. After the announcement, I bought all his books and did my homework, and my excitement grew exponentially.”

“From what I know about Tim Miller from reading his books, he is very movement-oriented and has us connect with ourselves in his workshops,” Hunt said. “I read about an exercise where he had students select the parts of their body they felt most important to them, and then they drew on that part and created a performance with it.”

Arts- Administration major Glenn Williams explains that his excitement also comes from his historical and present day work for the LGBTQ+ community.

“He is such an important part of queer history and art history,” Williams said. “I just want to learn from him and grow as an artist and person and possible gain some of his fearlessness.”

Admission to the performance is free, but tickets are required. They are available at the Clowes Memorial Hall box office and at butlerartscenter.org.