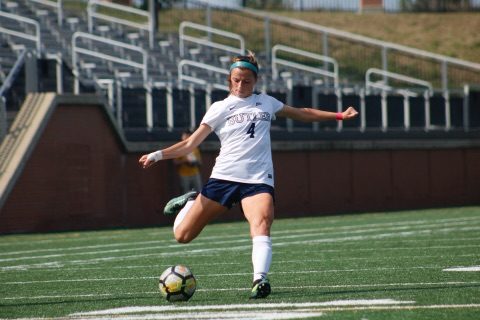 Junior forward Paige Monaghan fires a shot against Cleveland State on Sept. 3. Monaghan added a goal in the team’s win over No. 10 Texas A&M on Sept. 8. Photo by Jimmy Lafakis.

No. 10 Texas A&M University needed more than the ‘12th man’ to stop Butler women’s soccer on Sept. 8. The Bulldogs knocked off previously unbeaten Texas A&M (3-0-1) 2-0 in College Station. The win is Butler’s fifth straight win in a row.

The first goal for the Bulldogs came in the 32nd minute. Junior forward Halle Stelbasky made a no-look backwards heel pass to fellow junior forward Paige Monaghan. The goal was Monaghan’s first of the year.

The Bulldogs would add onto their lead to finish the first half. In the 43rd minute, Freshman forward Caitlyn DiSarcina found Stelbasky in the box. Stelbasky’s shot went past the Aggie goalkeeper and just inside the right post for her first of the year.

The Bulldogs relied on their defense to complete the victory. Butler was able to defend two early Texas A&M corner kicks in the beginning of the second half. Also, Texas A&M had two shots bounce just over the crossbar in the final 15 minutes of action.

Frustration set in on the Aggies in the final 10 minutes. Texas A&M Senior Mikela Harvey received a red card in the 81st minute. Harvey’s ejection was followed up by Texas A&M head coach G Guerrieri being sent off by the officials a minute later.

Texas A&M outshot the Bulldogs 16-4 in the game. However, three of Butler’s four shots were on goal, while the Aggies only put five shots on goal. Monaghan led the Bulldogs in shots with three.

The Bulldogs continue to set school records. They are the first team in Butler history that has only allowed one goal in their first seven games. Also, Luedtke made five saves in the game. Her saves moved her to eight all-time in Butler career saves with 98.

The Bulldogs are 5-1-1 on the season. It is the team’s fifth straight shutout. They are back in action against Indiana State University at the Sellick Bowl at 1 p.m. on Sept. 17.