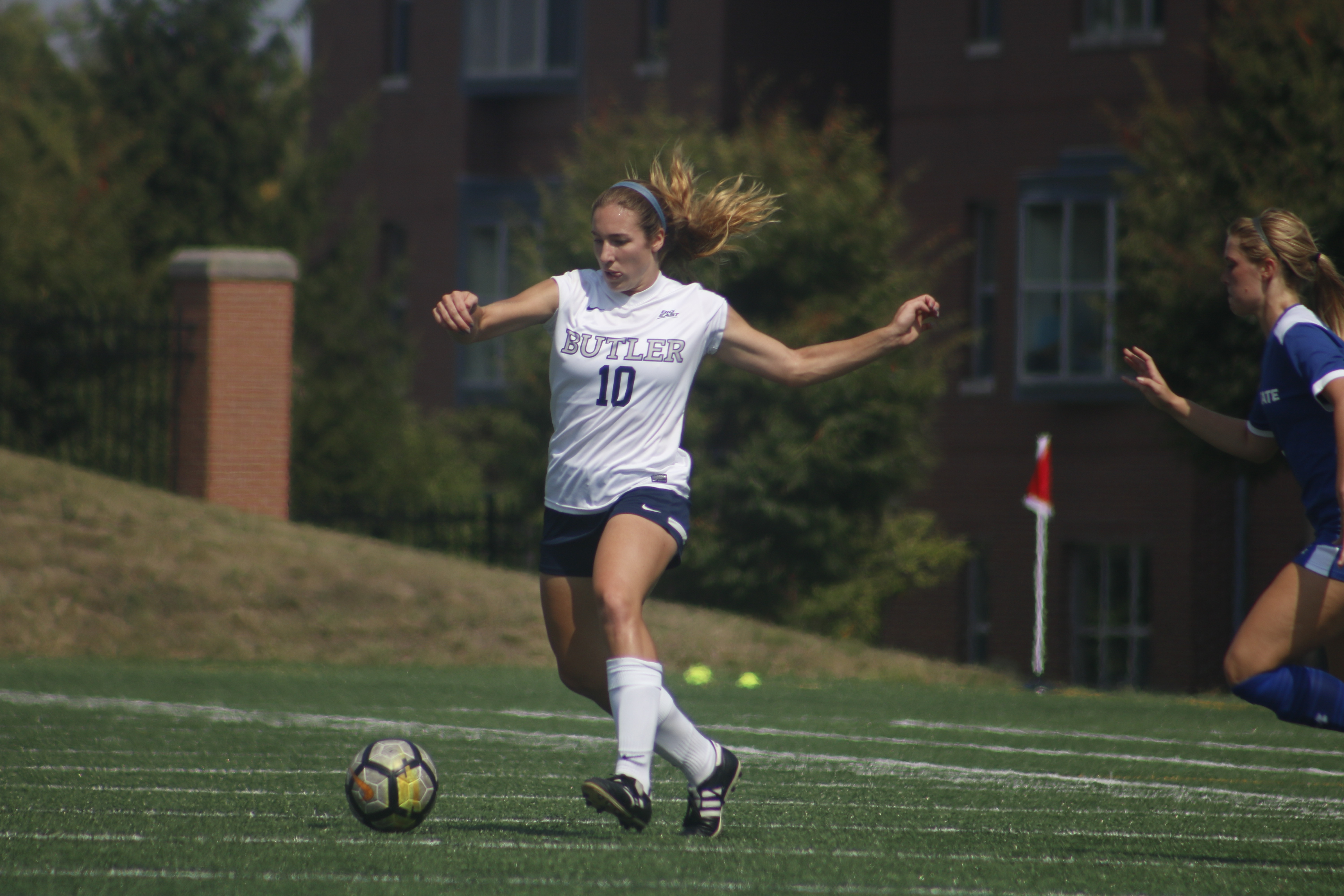 Junior forward Breann Pempek hustles after the ball in Butler’s 1-0 win over Indiana State on Sept. 17. Pempek scored the game winning goal over the Sycamores. Photo by Jimmy Lafakis.

The Butler University women’s soccer team has won their last six games in a row via shutout, a program record.

Judging from the lack of ranking at the beginning of the season, coaches across the country were not expecting much from Butler women’s soccer.

Butler was picked to finish sixth out of the 10 Big East programs in the Big East coaches preseason poll. Reigning champion Georgetown University was picked to repeat as champions. The Bulldogs were not ranked in any preseason polls and seemed to be off the national radar.

“I think a lot of the preseason rankings mean nothing,” co-head coach Rob Alman said. “I think it’s fantastic when someone gets ranked nice and high in those things, but it tends to be things that teams did last year.”

As for last season, Butler started out 7-2-1 through the nonconference schedule. However, the Bulldogs went 4-4-1 in Big East play and were quickly ousted in the conference tournament to Georgetown 4-0.

The team only lost four letterwinners from last season’s squad, three of them starters. Their biggest loss to graduation was Serina Kashimoto who now plays professionally in Germany.

Redshirt sophomore Hannah Luedtke has played in five of the last six shutouts, posting complete game wins in the last two. Luedtke has only allowed one goal this season and was named Big East goalkeeper of the week on Sept. 11 after her performance against Texas A&M.

“Yeah, we don’t really worry about that [being a ranked team],” Luedtke said. “That’s just what has been decided for us. We go out there and play like we’re a first place team.”

Freshman goalkeeper Leonie Doege has also played a huge role in the team’s shutout streak. Doege was named Big East goalkeeper of the week on Aug. 21. She has not allowed a goal in her five matches of action. Doege has been absent from the team since she went home to Germany to play on the U-19 national team, but will return to Butler in a few weeks.

The Butler defense ranks near the top in national defensive categories. The Bulldogs are third in the NCAA in shutout percentage (.875). They are also third nationally in goals-against average (.122) and second in save percentage (.971).

The goalkeepers are not the only players to receive recognition from the Big East. Freshman forward Caitlyn DiSarcina was named Big East freshman of the week on Aug. 28 after scoring two game-winning goals against Michigan State University and Bowling Green State University.

Butler junior forward Breann Pempek earned the most recent Big East offensive player of the week award on Sept. 17. Pempek scored the lone goal in Butler’s 1-0 triumph over Indiana State on Sept. 16. She said having a few extra days of rest was a major key in the team’s breakthrough goal in the second half.

“It’s definitely great when we can get extra recovery time,” Pempek said. “We usually play Thursday or Friday before we play Sunday, so having that extra week was great for getting our legs back under us.”

Though the team has been unstoppable on the defensive end, Alman and his squad look to fine tune the offensive end of the field.

“I think now the performances that we’ve put together are pretty good,” Alman said. “But we’re still looking to get better. And that’s a challenge to just keep improving every game.”

Butler’s next game is their final nonconference game of the season. The Bulldogs will host 1-9 Chicago State University on Sept. 21 at 7 p.m. at the Sellick Bowl.

“We certainly won’t overlook them,” Alman said. “We’ll prepare in exactly the same way we usually do. Definitely some things on the attacking side that we are still working on. It’s been a work in progress over the last three or four weeks.”

Following the match against the Cougars, Butler will begin Big East play at home against conference rival Marquette University on Sept. 24. The game against Chicago State will air online on the Butler athletics Facebook page, while the Marquette game will air online with the Big East Digital Network on Fox Sports Go.