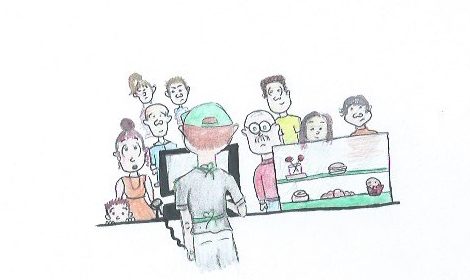 Seventeen study tables, nine couch seats and one perpetually long line of worn-out students looking for their caffeine kick: this is the foundation of Butler’s Starbucks. While there are times throughout the week, particularly the weekends, where Starbucks calms down, the short supply of seats, service and space is noticeable during the weekdays.

From Monday to Friday, from opening hours to the last classes getting out, a long, snaking line of students and a crammed study area are the norm at Butler’s Starbucks.  Despite this, Starbucks never fails to attract hundreds of students every day.

I believe two factors play into the the popularity of Butler’s Starbucks: supply and demand, and convenience.  Being right next to buildings like Jordan Hall and the College of Communication, and not too far from the College of Pharmacy and Health Sciences makes Starbucks a convenient location to study before and after class. With it being the only cafe on campus, a low supply and high demand for coffee is inevitable.

I am unable to get work finished in Starbucks, but it seems like a majority of students are content with the crowded atmosphere the cafe offers while they complete their studies. Thulani Smith, sophomore digital media production major, is one of those students.

Smith said he likes Starbucks as a work space, but believes a lack of space sacrifices comfort.

“I do think that it is a productive weekly work space, but I also wish that the area was more cozy, bigger and had more tables,” Smith said. “The small circle tables could definitely be upgraded.”

Despite this, the atmosphere Starbucks provides is also a factor as to why Smith decides to get his work done at Starbucks.

“I study at Starbucks because it is a space that is not too quiet like the library and not too loud like a rowdy dorm room,” he said. “It seems to be the perfect balance of peace and chaos.”

Starbucks patrons often take for granted the perspective of the employees making their drinks or taking their orders.  Karena Bakas, senior English creative writing major, worked at Starbucks on campus for about a year and a half and appreciated the kindness coming from most of the students who come the coffeehouse.

Bakas also said the register was one of her favorite parts about working at Starbucks on campus.

“I’m a total people person so I enjoyed getting to know students from several different parts of campus,” she said.

She also pointed out there was a mutual understanding amongst the employees regarding the worst part of the job.

“We pretty much all hated the cold bar,” she said.  “Frappucinos take forever to make.”

Personally, I think a larger study area inside is the best solution for the overabundance of people at Starbucks.  This could also create a larger bar that could serve more students, which would reduce the wait time for one’s drink.  On the contrary, this would also make for another construction project, which Butler has no shortage of at the moment.

Regardless of whether or not anything is done to the coffeehouse, the high demand for caffeine and a place to get work done will always attract patrons.  Tables will stay occupied, students will be studying, and frappuccinos will stay brewing.