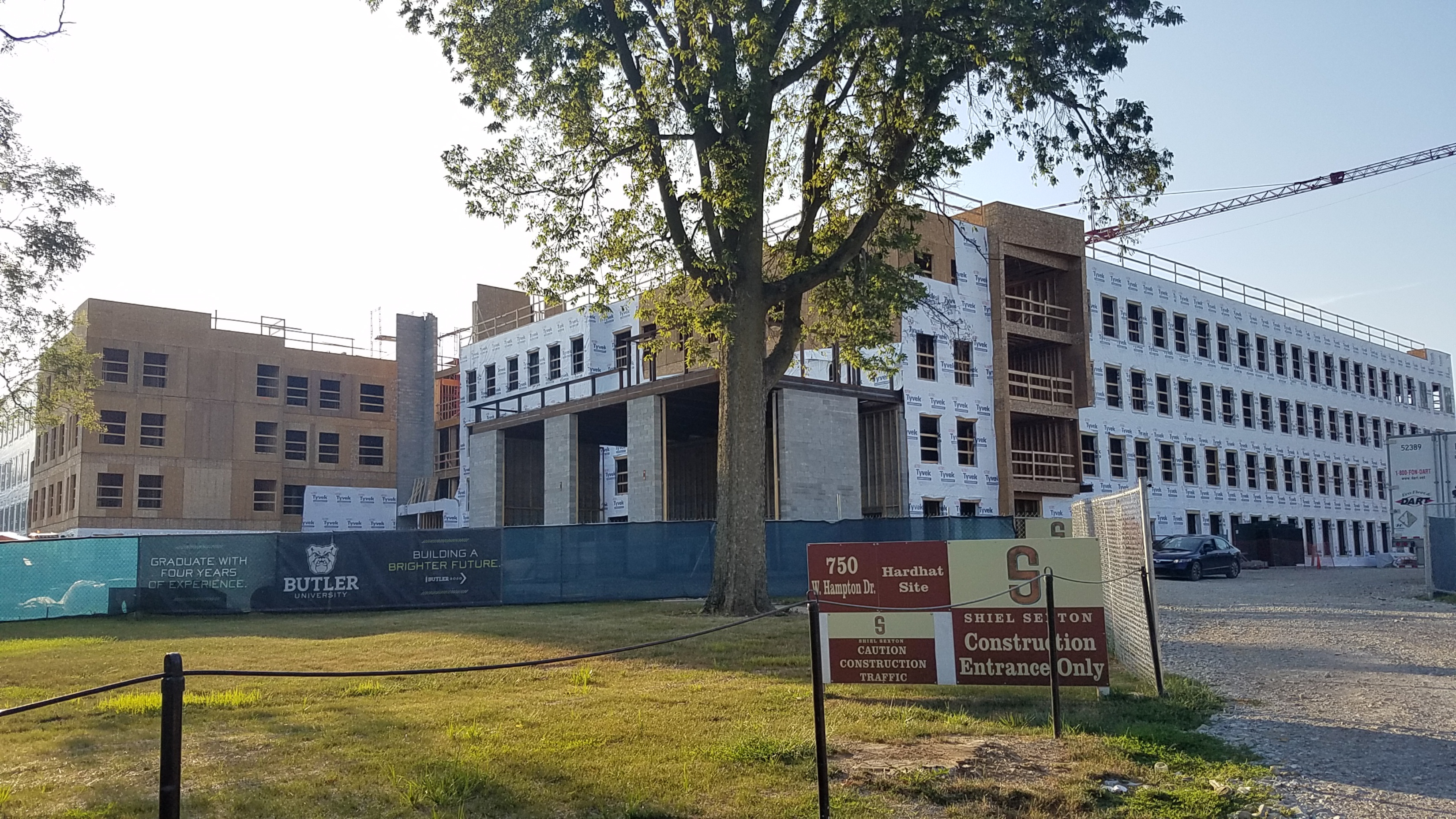 The familiar sounds of drills, truck engines and shouting workers will once again be present this semester as work continues on campus. Some of the major projects include the new residence hall and the Lacy School of Business building.

After the demolition of Schwitzer Hall last winter, its replacement is well underway.

The new residence hall, which is still without a name, will be able to house more than 600 students, and is slated to open in August 2018. It will be configured suite style like ResCo, and is intended to be primarily for first-year students.

No decision has been made on the future of Ross Hall, which will likely not be used for housing by this time next year, Rich Michal, associate vice president of facilities, said.

Some parts of the long-standing Schwitzer will be used around campus. Michal said stone from the structure was used at the site of a new power substation, while some of its iconic entryways are in storage awaiting a new use.

Michal acknowledged that the student housing experience had been one of Butler’s weaknesses for many years. He has heard that prior to the completion of Fairview House and other campus improvements, “students came to the university despite our housing.”

“We’ve got great academic programs, great student life programs, great amenities,” Michal said. “But one of our shortcomings was the age of our housing and the amenities associated with it.”

Michal said that while Butler’s core mission is about education, the university also recognizes that students are looking for a residential experience.

While the new dorm is not specifically being built to increase enrollment, it gives Butler the space to do so in the future if desired, Michal said.

ACC Construction Manager Patrick McMahon said his company works with the university to fit their needs.

“That allows us and the university to work together so that we can provide the housing, so the university doesn’t have to finance,” McMahon said. “They can focus more on classrooms or other types of educational benefits for students.”

One example of investing in educational resources is the construction of a new building to house the Andre B. Lacy School of Business.

The new building is located along Butler Way next to Irwin Library. Construction began this June, and the facility is expected to open in Fall 2019.

Although she will have graduated by then, junior marketing major Beth Thompson said she is happy about the impact it will have on business students.

“It’s exciting for the freshmen and those younger than me because they’ll get the opportunity to have all their professors in one building, and all their classes in one building,” she said. “I think it just creates a better community within the business school.”

Thompson also said that she has business classes in a number of different buildings, something she has gotten used to but is glad will soon change for future students.

“I think the new students, when the business building gets built, will be very excited,” she said. “It’ll be much easier, much more centrally located.”

Michal said the new building, which has been in the works for years, will not only help handle the recent growth of the business program, but also allow the university to move the school of business out of Holcomb and free up more space for the sciences.

“That’s something that’s been a critical need since long before I was here,” he said.

In addition to those bigger projects around campus that students are certain to notice, Michal also noted some other work that was completed over the summer.

A new electric substation, located at the Greek parking lot next to Alpha Phi, was activated. The substation is intended to help prevent power outages and be more reliable than the old one, located near Jordan Hall.

The university is waiting on a utility company to decommission the equipment at the old site so that it can be cleared out and cleaned up, Michal said.

Renovations were completed over the summer on the back kitchen of the Atherton Union dining hall. While the work is not expected to be noticeable to students this school year, it is part of the first steps in a major dining plan, which includes the expansion of Atherton dining hall to two floors and move of C-Club to the ResCo dining area.

More noticeable work on that front is expected to begin next summer.

Michal said all the construction on campus, from the new buildings to electrical work, is in support of Butler’s 2020 plan, and helps to make the university’s other initiatives successful.

While the construction on campus won’t be ending anytime soon, progress continues to be made on a number of projects that will directly impact students.