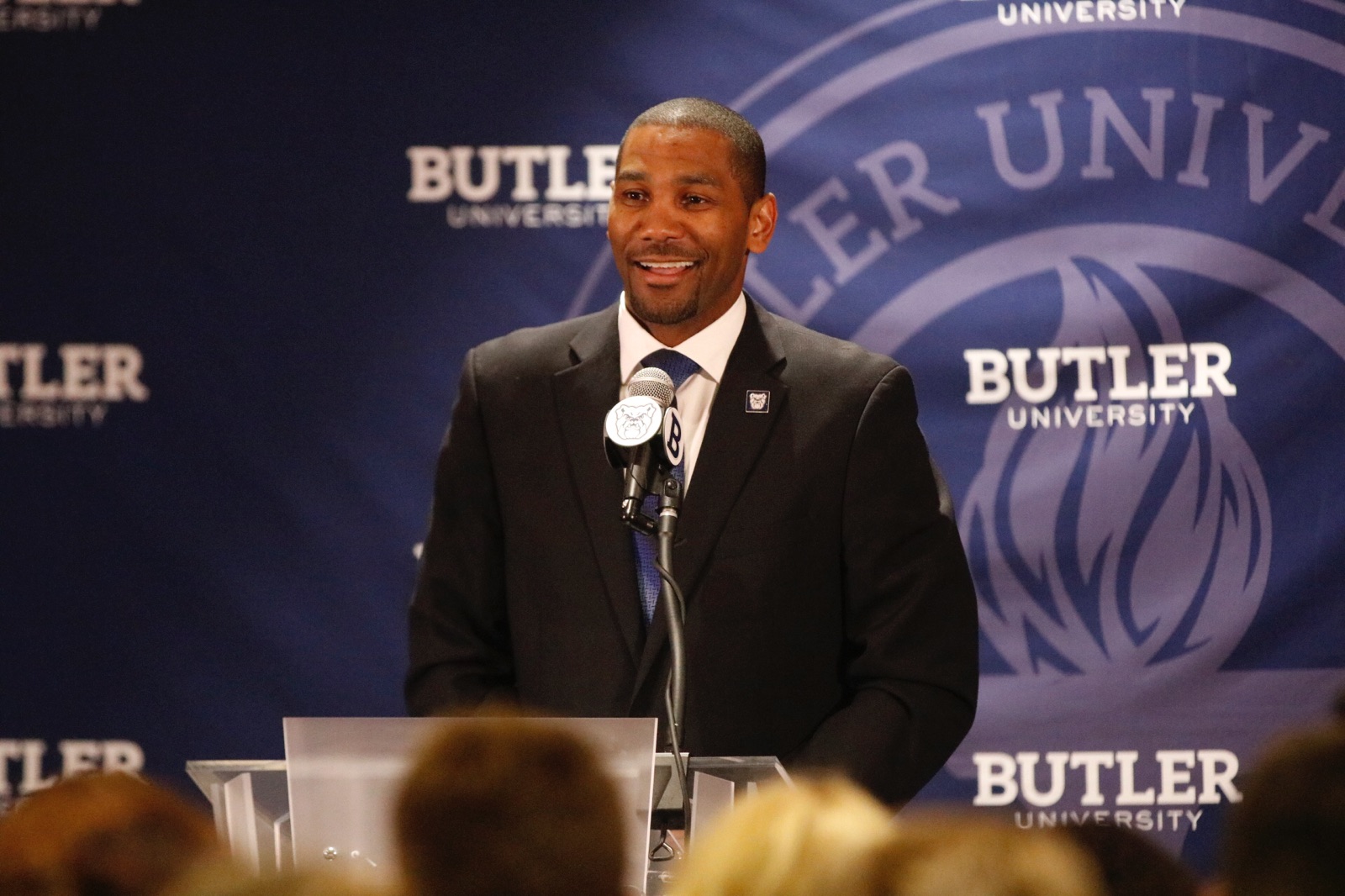 Jordan addresses media for the first time after getting hired in June. Collegian file photo

Day 65 exists between Day 64 and 66, a block of time scrawled in his leather-bound planner and circled in black pen. Lined along the Mondays and Tuesdays and days of August, it serves as neither countdown nor quantifier of anything at all.

Every day is one further from the day former head coach Chris Holtmann stepped out for Ohio State, LaVall Jordan stepped in, and one day closer to the season opener at Hinkle Fieldhouse. Aug. 17 was Day 65.

Watch the pieces come together for this man: the one who runs on a different calendar, the one who time denied twice. Start from the beginning and watch as Jordan is introduced as Butler’s 24th head men’s basketball coach. That was Day 1.

“It’s a next play mindset,” Jordan said. “Next play is the press conference, next play is hit the road and recruit these guys because you want them to be Bulldogs. It’s just a constant ‘what’s next?’”

Calls to current players were first, then home visits — flights and drives crossing Georgia, Kentucky and Indiana — wherever his players were.

This was family. Isn’t that what Jordan’s father told him after then-head coach Barry Collier recruited the Michigan native to play for Butler 20 years ago? Families don’t make assurances over the phone. There’s something sincere about a handshake and when Jordan shakes your hand, he radiates it.

“Mainly [the home visit] was just to get to know my family,” sophomore guard Kamar Baldwin said. “Just to make sure they were OK with him being the coach. He let them know that I was still going to be in good hands just like the other coaches.”

It was a re-recruitment of sorts, but when the freshmen moved in on Day 11, Jordan had retained all but one with the first team meeting 24 hours later. He was hiring a new coaching staff and planning practices between summer school while squeezing in the media obligations he had etched in red pen.

Forgive him, he doesn’t remember if the July recruiting period started the 11 or 12.

He was staying with his mother-in-law in Indianapolis and house hunting when his wife Destinee could make the nearly five-hour drive from Milwaukee. The craziness stopped long enough for him to spend three nights in his new home before August hit, and it was off to Spain.

Maybe it was a good thing he wasn’t home for majority of the move-in process. Destinee could put everything where she wanted, no debates. She likes to call him particular. He only smiled and gave a partial confession.

How many days does it take to soak it all in? Day 100? The one after that? There’s no indication as to what day Jordan might sit in his office, lean back in his chair and realize he’s the head coach.

He executed for the best of them as a player for Collier and Thad Matta. As an assistant coach, Jordan was alongside Todd Lickliter at Butler and Iowa, and for John Beilein in Michigan. Each coach successful in his own right; each one keeping the wheels of Jordan’s mind turning.

He lived and died by the scouting reports. You can almost see it, a younger version of the coach to-be sifting and analyzing.

He’ll take any advantage he can get. Not that he really needed it. Lickliter always said Jordan was an athletic guard. He also knew he’d make a great head coach. Not everyone’s name gets to share a sentence with Brad Stevens. But Jordan is right there, Lickliter said.

Maybe a man like that doesn’t need to prepare. But it’s more likely Jordan prepares the way he does to become that man. When a briefing reminds him of the NCAA compliance test he’s due to take, Jordan is already asking his secretary to send the practice links.

The secret to using details is to keep them tucked away in your back pocket. It’s that scouting report Jordan consumed before games. Let the guy drive to the left, keep driving….bam! When he crosses over to the right side of the hoop, Jordan was already there.

By the time he met Collier for the job, he had a notebook filled with everything from coaching philosophy to program and team management.

“As an assistant you have this philosophy and these things on paper; but, when you get in the seat and actually have to go, it’s like having a baby,” Jordan says. “You can have all these people giving you advice but when you bring the baby home, you’ve got to learn how to do it all.”

He hasn’t even picked out a blue suit yet. Maybe his oldest daughter will choose the tie. She knows the winning ones. No Dad, we didn’t win with that one.

See him now, settling into his office in Hinkle Fieldhouse, a gray Butler polo tucked into black shorts; the same polo currently hanging in the school bookstore.

See Jordan flipping through his planner and his fingertips familiarly leafing through the months in Milwaukee. His first head coaching position. He planned to take note of his first 100 days in office. What he liked, the decisions he made and the results, changes, ways to communicate better, it was all there.

Funny how 100 days stretched into a year. Those were good months, weren’t they?

His team almost pulled it off, you know. The last seeded team of the Horizon League Tournament just fell short at the championship game. Four stinking points. Can you imagine the upset? He was happy there, and probably would’ve stayed longer if Butler hadn’t come calling.

It happened before. Jordan thought his alma mater was calling him home. In 2013, Brad Stevens left for the Boston Celtics. The head seat was open. Maybe it was for Jordan. He was at Michigan, studying the past three years as John Beilein’s assistant.

“If there was an opportunity, I’d probably come back six or seven times if it wouldn’t have happened,” Jordan said. “This time, thank God it did.”

Jordan collects sayings and laughed when he said the quotes are only because he’s not smart enough to think of his own. “Walking forwards is better than walking backwards” happens to be from Coach Beilein. Working with him for six years means Jordan uses the same saying for his daughters after they skip a toy’s instruction manual.

God, was it hard to sit his three girls at the dinner table and let them know they were moving again. How to tell the oldest, the one who was moved from Iowa to Michigan to Milwaukee that they’re going to Indianapolis?

Ava is only 12 years old, and middle school is hard and making friends is harder, and wow, she’s only six years younger than he was when he first put on that Butler uniform.

Rewind 20 years. Jordan and his father are headed home after seeing Butler for the first time. Driving up I-69, it’s impossible to know that Jordan will graduate as the school’s winningest player, get his first coaching job there, and a decade later, become the first African American coach in Butler’s history.

Here in the car driving home, the only thing Jordan knows is that he doesn’t have an answer to his father’s question, “What else are you looking for? Sleep on it, but if you feel the same way tomorrow morning, there’s no need to waste other people’s time.”

He sleeps on it. And suddenly it’s like something out of a dream and now athletic director Collier is in front of a press conference introducing the country to Jordan.

He’s looking at his daughters from his spot at the podium. He can see it on their faces. Why is anybody this excited about Daddy?

This man who gets up at 4:30 a.m. before the house gets up just so he can “get ready to get ready,” this man who values the same sayings his great-aunt used when she was raising him. This coach who says the losses keep him up at night and stays up long enough to solve how he can do it better.

Just wait until the first Hinkle Fieldhouse game day. Day 154. Maybe the clock will slow down just enough and Jordan can stop counting the days long enough to hear the Butler head men’s basketball coach introduced over the P.A.

When they introduce the coach for the first time, it’s his name he hears.