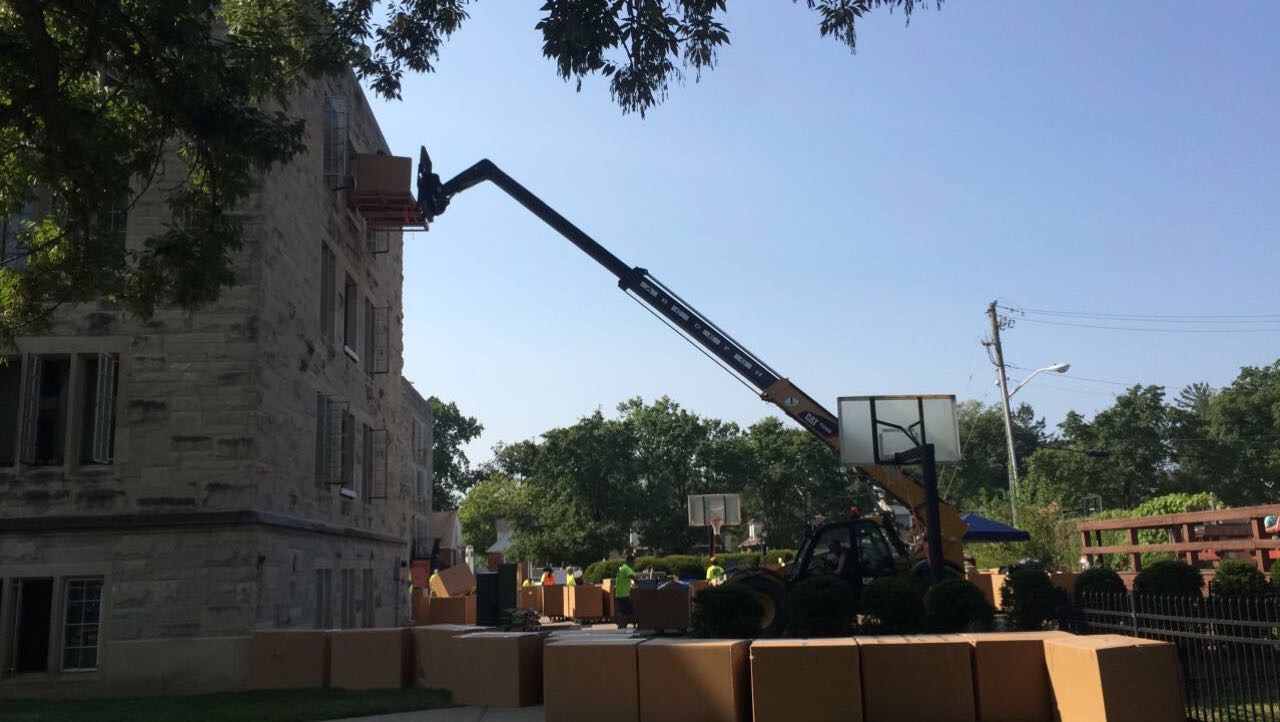 When Butler parent Susan Parsons moved into her dormitory her first year of college, the process looked a little different than moving her oldest daughter into ResCo this year.

“When I moved in, there was parking outside the building,” she said. “I was on the third floor and my parents and I made multiple trips getting my things to my room.”

Her daughter is also on the third floor, but the family did not have to “lift a finger.”

This year, Butler hired University and Student Services to assist those moving into ResCo, Ross Hall and Fairview House.

This was the first year Butler used a move-in service. Volunteers, collectively called “Trip’s Troops,” assisted with residence hall move-in in the past.

Doug Howell, associate director of residence life, said the university chose to do away with this method because the number of volunteers has declined over the years.

“It was not a one-to-one service,” he said. “The number of volunteers was always a big variable. The amount of effort that those volunteers put in was always variable. It just made a lot of sense that if you want to make the process move as efficiently as possible, you need to hire people to do that.”

Vin Peseski, USS president, said there were about 180 movers on Saturday and Sunday. Howell said the volunteers in the past typically capped out at 200, but that number was spread out over two to three hour increments. All of the USS volunteers worked the whole day, except breaks for lunch.

Butler used the USS-exclusive Cruise Ship Move-in service. Peseski said he got the idea after taking a cruise.

“I found it interesting,” he said. “I dropped my bags and signed some papers, and by time I got to my room, everything was inside.”

Through this service, Butler students moving into residence halls on opening weekend received a check-in time from the university. At their time of check-in, the student would fill out required papers and pick up room materials at the Health and Recreation Complex. Families also received color-coded placard for permission into the loading zone.

Once finished at the HRC, vehicles followed the color-coded route to their building’s unloading zone where USS staff unloaded all items and delivered bins straight to the students’ rooms.

Peseski said the planning for move-in began about three months ago. USS began hiring movers and ordering equipment, like dollies and bins, which was delivered directly to Butler. The day before move-in, USS employees set up in the required areas, along with odds and ends tasks, like collecting water coolers, bandages, and T-shirts for all movers.

“Everyone [at Butler] followed directions and that’s what makes the formula work,” Peseski said. “Last thing you want is to tell people people to show up at 8:00 and they show up at 8:30 or 9:00.”

“I think it has been smooth compared to most schools,” she said. “But, I still [waited] an hour and a half to get my things.”

Peseski said using the lift was a unique experience. The insurance company USS uses does not allow movers to use stairs, and unlike ResCo and Fairview, Ross Hall does not have an elevator. So, Butler and USS came up with a solution.

“Butler wanted to give the same experience to those at Ross, so we found a way to get items into the building without an elevator,” Peseski said.

Butler employees had to remove windows in Ross in order to create the outdoor, makeshift elevator. Howell said USS wanted to put three boxes on the lift at a time, but for safety reasons that was not possible.

Jaylah DeGout, sophomore computer engineering major, is a resident assistant in ResCo this year. The RAs were in charge of opening exterior and room doors for the movers. While their units moved in, she said RAs had the chance to spend time walking around the hall.

She said there were a couple minor hiccups in her residence hall on Saturday. On one of the first trips, the elevator broke and emergency maintenance was called. There were empty bins in narrow hallways causing some congestion as well.

“I think it was hard for the move-in company because they didn’t really know what to expect at first,” DeGout said. “But once they got into the groove, it was really smooth.”

She said Butler should continue the service.

“Any time you do something for the first time, you’re going to find the flaws in the system, areas for improvement,” Howell, associate director of residence life, said. “So, those are already being talked about. And USS are masters at the logistics of everything, so they have already identified areas where there will be improvement if we do this in the future.”

The service was only available on opening weekend. Howell said this was primarily to reduce the large number of people moving in within a limited time. Students were not required to use the service, but Howell said no one came to him to opt out.

“If somebody told me they were going to move my stuff into my room I would be like, ‘Show me where to go,’” he said.

Peseski said he is not at liberty to discuss what his clients pay, but USS will give the university a quote based on the number of students. At Arizona State, who has used USS services the longest, Peseski said they move in an average of 10,000 students in 16 hours. He said USS moved in about 1,200 at Butler.

Peseski founded the company in 2009 after moving his own kids into college.

“It was the worst experience I ever had,” he said. “I wondered why. If paid a significant amount of money for my kid to go to school, why couldn’t they help move students in?”

The company has grown to service almost 85 universities, including Northwestern and Louisiana State.

“One thing is consistent no matter if the school is large or small: you have students checking in, and students are students wherever you go,” Peseski said.

He said he believed Butler wanted to bring a positive experience to not only the students, but the parents.

“Many parents we survey who didn’t use our service say the move-in was so terrible, so long, so miserable that they didn’t have time to experience campus with their student,” Peseski said.

Howell said the university is in the process of collecting survey data from students and parents who used the service. This will play a large part in determining if the service will be used again.